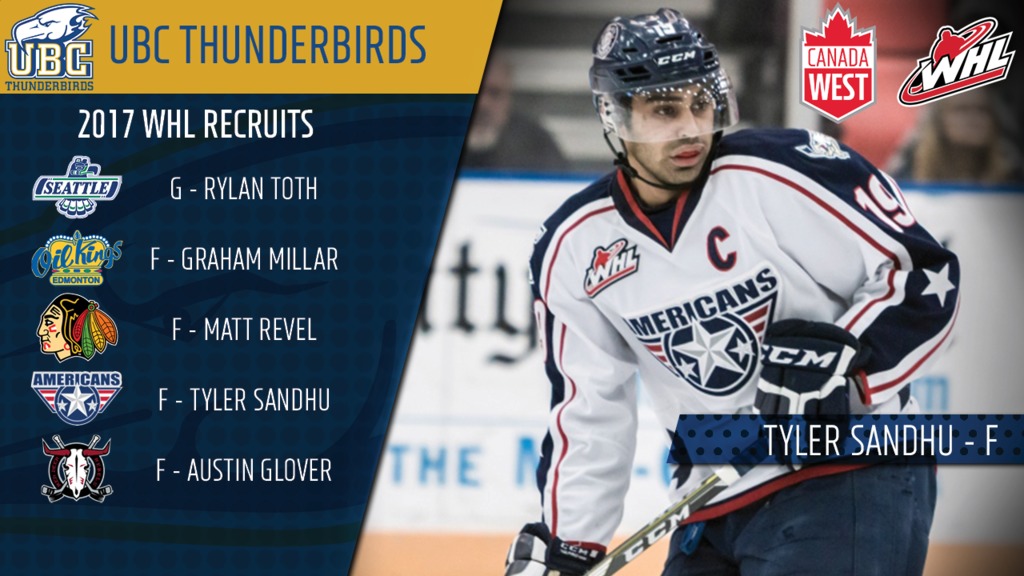 University of British Columbia Thunderbirds head coach Sven Butenschon is hoping he’ll to see his team put the puck in the net more often this season thanks to the addition of some high-powered Western Hockey League talent.

Butenschon’s first recruiting class as UBC head coach includes no less than four forwards from the Western League, all of whom had at least 20 points last season.

“Last season was an interesting season with me stepping in as head coach in September. It was a bit of a whirlwind tour, you know, it took a while for the team to figured out the style of play that I wanted,” Butenschon said. “I think in the second half of the season we found our team identity, we kind of came together and had a great second half and a real strong finish.”

Players like former Tri-City Americans captain Tyler Sandhu and Red Deer Rebels forward Austin Glover should help the second-lowest-scoring team in the CW last season find the back of the net more often.

Meanwhile, guys like Graham Millar and Matt Revel will provide some depth to a group of forwards that is losing several key pieces this year.

“We’ve had trouble scoring in this league for the last couple of years. We had an opportunity to watch some of these guys over the winter and we’re pretty lucky and grateful to have landed them,” Butenschon said, adding that the addition of the new class of forwards, plus an already-strong defensive corps should make the T-Birds a force to be reckoned with next season.

“We’re pretty strong on D. I’m comfortable with our D right now, we have eight guys that can all play, none of them will be rookies – they’ll be going into their second, third, fourth year so I’ll be expecting a lot from those guys.”

While his focus when drafting his recruitment strategy this season was on forwards, the second-year coach also rounded out his goaltending corps with the addition of Seattle Thunderbirds netminder Rylan Toth.

Toth, a product of Saskatoon, was a key part of the WHL Championship-winning Seattle Thunderbirds last year, posting a 36-18-3 record during the regular season last year.

The 6-foot-2, 201-pound crease keeper has also made starts in two consecutive MasterCard Memorial Cup tournaments – once with the Thunderbirds last season in Windsor and once two years ago as the starting goaltender of the host Red Deer Rebels.

Butenschon said that while UBC won’t be the biggest or strongest team in the league, they’re going to be a tough team to play against when October rolls around.

“We’re not big, we’re not long, but we can skate. We’re going to be in great shape and we’re going to try to skate other teams to the ground.”

With the T-Birds losing their top two centremen in Anthony Bardaro and Luke Lockhart this season, the door could be open for Sandhu to step directly into a top-six role right off the hop this year.

The 5-foot-10, 183-pound centreman is coming off a career year in the WHL with the Tri-City Americans, finishing the 2016-17 season just outside the top 20 scorers in the league.

Sandhu joins the T-Birds offense with a long track record of success at the WHL level.

Since breaking into the league with the Everett Silvertips as a 16-year-old in 2012-13, Sandhu has put up an impressive 228 points (90 goals, 138 assists) and logged just 99 PIMs in 318 career games played with three different teams.

Every year 100s of former WHL players attend post-secondary institutions across Western Canada, putting to use their WHL Scholarship money. Last season more than 200 former WHLers skated for one of eight CW men’s hockey teams, including 51 in the CW championship series.