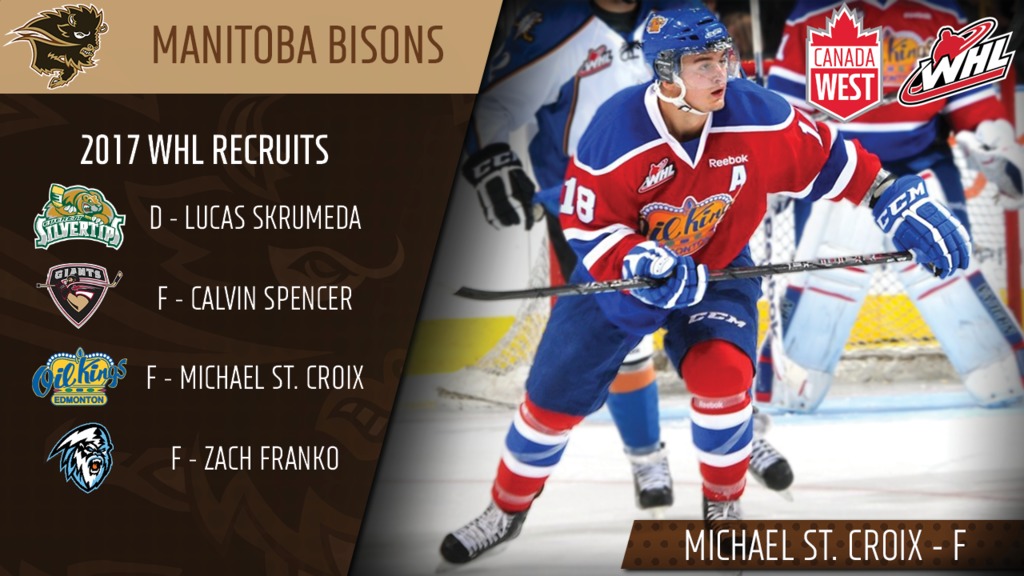 This fall will be a homecoming of sorts for a trio of Winnipeg products, who return to the Manitoba capital to hit the ice with the Manitoba Bisons.

Former Western Hockey League products Lucas Skrumeda, Michael St. Croix and Zach Franko are all returning to the ‘Peg after their hockey careers spread them across the continent.

Skrumeda becomes a Bison the same way many have before him – following a strong WHL career. The six-foot defender spent three full seasons in the WHL, totalling 42 points in 175 games with the Everett Silvertips.

Taking a less traditional route to the Herd are St. Croix and Franko, who enter the fold expected to make significant offensive contributions right away.

Franko joins Manitoba after spending last season playing senior AAA hockey in Alberta, while he waited a season to rejoin the U SPORTS ranks after stepping away from Acadia University. The former Kelowna Rocket and Kootenay Ice forward spent two years at Acadia (2014-16), where he amassed 53 points in 55 career Atlantic University Sport regular season games.

In St. Croix, Manitoba has another player who took a more unique path to Canada West, as the former fourth round pick of the New York Rangers spent three years playing pro before deciding to head to school.

In three seasons playing for Greenville in the ECHL, St. Croix registered 129 points in 178 games. Those pro numbers came after a big junior career with the Edmonton Oil Kings, which saw the 5’ 11” forward accumulate 320 points in 280 games, including a 105-point season in 2011-12.

Following a year redshirting and playing with the South East Prairie Thunder at the senior AAA level, St. Croix will be a key figure for a Manitoba team that finished fifth in the conference a year ago.

“Michael St Croix and Zach Franko are highly skilled offensive players who have a history together as they played on the same line throughout their minor hockey days in Winnipeg. Zach has tremendous speed and great hands while Michael is a very intelligent and gifted playmaker. They both can score and will be expected to help lead (our team) offensively this coming season,” said Bisons head coach Mike Sirant earlier this summer about his new recruits.

While Skrumeda, Franko, and St. Croix are all heading home, forward Calvin Spencer has some Winnipeg ties as well.

The Brooklyn Park, Minnesota product will have Winnipeg Jet Dustin Byfuglien to show him the sites, as Spencer and Byfuglien are half-brothers. A veteran of 230 WHL games combined between the Seattle Thunderbirds, Swift Current Broncos, and Vancouver Giants, Spencer will likely slot into an energy role for Manitoba in the early going, as he looks to make the Canada West jump.

St. Croix’s addition is a big one for Manitoba, who despite not struggling to score – they netted 96 goals a season ago – certainly will welcome St. Croix’s proven scoring touch.

In addition to his big WHL regular season numbers, St. Croix was clutch for the Oil Kings during a pair of deep playoff runs, registering 45 playoff points in 42 playoff games during the 2011-12 and 2012-13 seasons combined.

A former teammate of Franko’s during the two’s minor hockey days in Winnipeg, St. Croix will be leaned on to produce on the powerplay, where he totalled 38 of his 105 points during the 2011-12 WHL season.

Every year 100s of former WHL players attend post-secondary institutions across Western Canada, putting to use their WHL Scholarship money. Last season more than 200 former WHLers skated for one of eight CW men’s hockey teams, including 51 in the CW championship series.