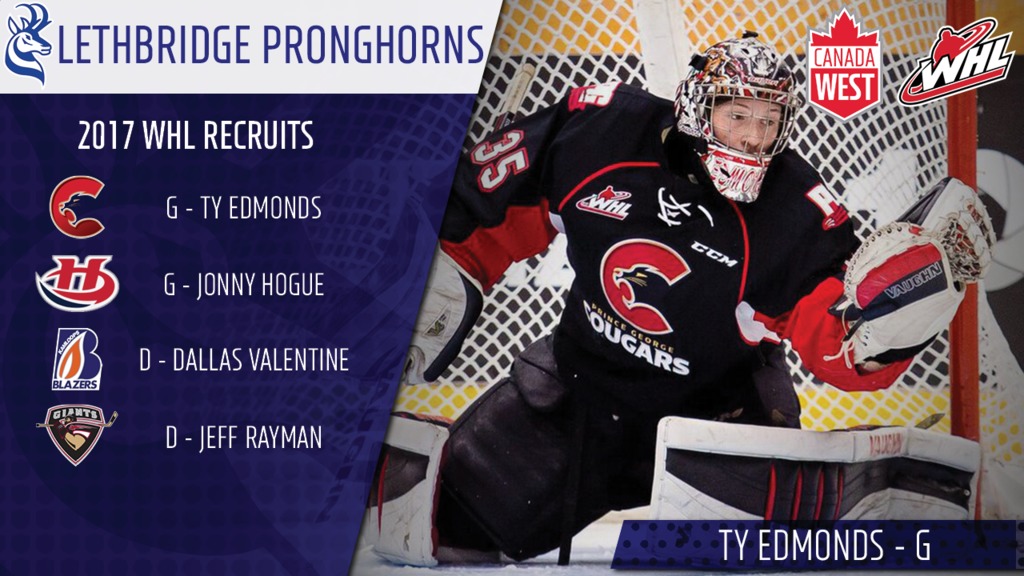 After finishing just two points short of a Canada West playoff spot last season, University of Lethbridge Pronghorns coach Spiros Anastas has turned to a handful of WHL alumni to flesh out his teams’ back end as they look to climb back into the Canada West playoff picture this year.

Anastas, now entering his fourth year behind the bench with the Pronghorns, put a strong emphasis on defense and goaltending with his latest class of recruits.

“Because my last two recruiting classes were so big – 12 or more guys each – this year it was really kind of concise. We just had some needs on the back end and between the pipes,” Anastas said.

Edmonds, a Winnipeg product, joins the Lethbridge goaltending corps after putting the finishing touches on a long and successful WHL career.

Meanwhile, the Pronghorns will get some much-needed defensive help this season with the addition of blue liners Jeff Rayman from the Vancouver Giants and Dallas Valentine from the Kamloops Blazers.

“Adding two huge bodies in Valentine and Rayman is huge for us. I think Valentine will produce a little bit more offensively as well as defensively where Rayman is just a strictly defensive guy who’s going to eat up some big minutes, play a lot of good defensive situations and play a lot on the penalty kill,” Anastas said.

While he didn’t bring in many players, Anastas said he is confident that with a solid core of second and third year players and the addition of this class of recruits, this season will be another step forward for a Pronghorns team that – not too many years ago – was at the bottom of the pack in the CW.

“I started three years ago and I took the worst team in – potentially the country – over. Since then we’ve really taken big steps forward and that, especially, has been because of the addition of a lot of WHL alumni,” he said.

Edmonds will provide some relief for a Pronghorns goaltending situation that was stretched to its limits last season.

The 6-foot-2, 180-pound goalie sports a proven track record which has seen him lead the Cougars into the WHL Playoffs in each of the past three years.

He’s also held down the starter’s role in PG in each of the four years he played with the team.

His arrival means that second year goalie and current starter Garrett Hughson will be able to take the occasional break this year after appearing in 23 of 25 regular season games as a rookie last year.

“Now the direction that our league is going you’ve got a lot of 7 p.m. games and then a lot of 1, 2 or 3 p.m. games the next day and we tried to push him through it a lot and he had a couple of aches and pains and a lot of times he came up short that second night,” Anastas said.

“That’s why Ty Edmonds is so key for us because now we’ve got two horses that we can ride and we won’t be putting Garrett at risk of injury or just trying to get us two points while he’s only 80 percent.”

Every year, hundreds of former WHL players attend post-secondary institutions across Western Canada, putting to use their WHL Scholarship money. Last season more than 200 former WHLers skated for one of eight CW men’s hockey teams, including 51 in the CW championship series.