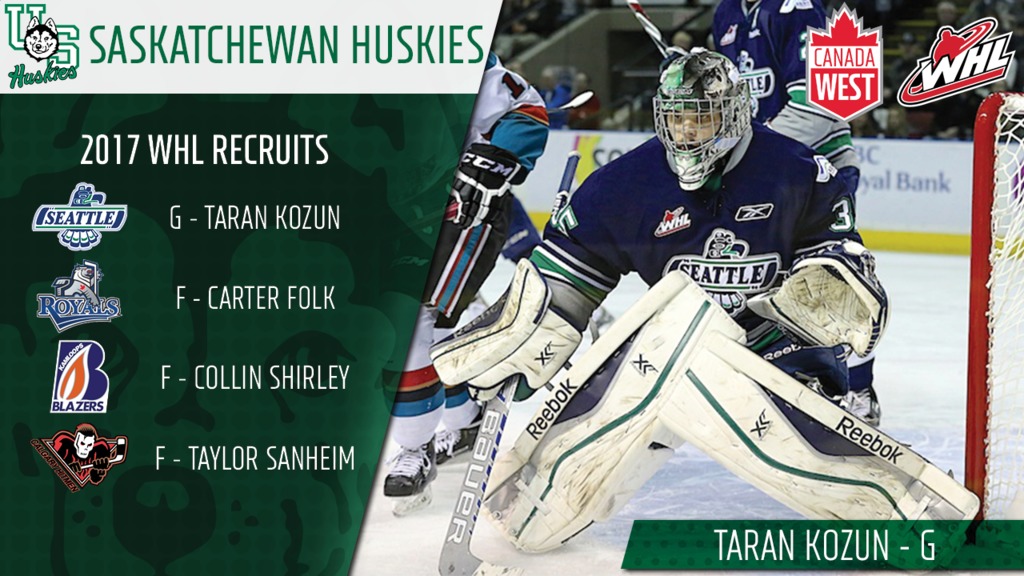 EDMONTON – Three things have come to define the Saskatchewan Huskies over the last several seasons – goaltending, grit, and goal scoring.

So it should come as no surprise that head coach Dave Adolph has added a little bit of all three this offseason with his latest group of recruits, who join a team that scored the most goals (106) and surrendered the fewest (61) in Canada West last season.

Adolph’s latest goaltending addition comes in the form of Taran Kozun, who will make his Canada West debut this season after sitting out a season, following a run in the ECHL.

The former Seattle Thunderbird, who was the Western Hockey League Del Wilson Trophy winner as goaltender of the year in 2014-15, will bolster the Huskies in net, slotting in behind back-to-back CW goalie of the year Jordon Cooke.

“Despite what a lot of people think, most coaches are only as good as their goaltenders,” said Adolph. “I think goaltending is fundamental to any team’s success, so we want to make sure we’ve got a plan when Jordon Cooke graduates.”

“Taran came here last year, proved himself in school, did really well and I think he’s going to be a good one moving forward,” Adolph added of Kozun, who skated and studied at Saskatchewan last season, but didn’t play.

In the grit department, the additions of former Victoria Royal Carter Folk and Calgary Hitmen Taylor Sanheim will provide the type of glue player Adolph knows is key to any team winning when it counts most.

“You have to plan to be successful and to be successful you have to be able to grind it out, have some size in the playoffs, and certainly some utility. Those two kids, they’re utility players. They do an awful lot. They both come highly recommended as guys a little bit under the radar, but they play that utility role better than a lot of guys,” Adolph pointed out. “I look forward to watching both of them grow as student-athletes.”

When it comes to goal scoring, the clear checkmark in that recruiting category recruits is Collin Shirley. A veteran of 344 WHL games, the Saskatoon product is coming off three straight 20-goal seasons, and brings with him leadership attributes after finishing his junior career with the Kamloops Blazers as the team’s captain.

“We’re fortunate enough that he chose school over a minor league deal, so I think he’ll really help,” said Adolph of the local talent. “He’s a big, strong kid who plays really hard. I think there’s two programs in the west who do a pretty good job of getting kids to come home – especially quality ones – and that’s Alberta and us. Collin’s a good example of that.”

With starting goaltender Jordon Cooke entering his fourth season in Saskatchewan, the Huskies now have a clear progression plan in goal when Cooke’s days with the program conclude.

Cooke, who is coming off back-to-back seasons as the top goalie in the conference, will surely earn the lion’s share of playing time in net for the Huskies, but with Kozun, Adolph has a second option that is more than capable of stepping in when the time comes.

“Jordon Cooke is the first guy on the ice and the last guy off and he’s probably one of our most committed student-athletes,” Adolph said of his No. 1. “He’s accelerated his academic program so that he can graduate in Business in four years. He’s a pretty committed kid.”

“But I think that Taran is going to earn his stripes. He’s a quality goalie. What Jordon will do is he’ll realize that the transition is important and I’m sure that there will be an awful lot of sharing before the season is over.”

Every year 100s of former WHL players attend post-secondary institutions across Western Canada, putting to use their WHL Scholarship money. Last season, more than 200 former WHLers skated for one of eight CW men’s hockey teams, including 51 in the CW championship series.

As part of the WHL and Canada West’s ongoing partnership, the WHL powers CW series highlights the latest crop of former WHL recruits who will make the most of their scholarship package at a CW school of their choosing beginning this fall.