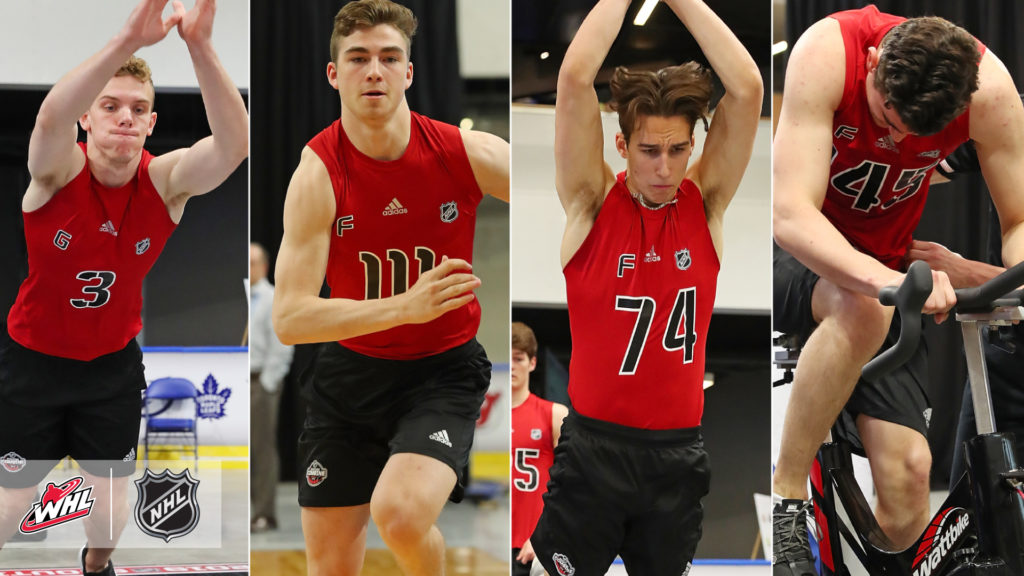 With time ticking down until the 2019 National Hockey League Draft in Vancouver, B.C., top draft-eligible players convened in Buffalo, N.Y. last week for the annual NHL Scouting Combine. Western Hockey League talent put their best foot forward at the event once again as the 15 participating WHL players showcased their strengths.

After a strong showing at the fitness testing during the 2019 Sherwin Williams CHL/NHL Top Prospects Game in Red Deer, Alta., Lethbridge Hurricanes forward Dylan Cozens proved he belonged in a consideration of the top talent once more, ranking in the top 10 of six different physical tests.

His best result came in the Wingate Test where he placed in a tie for second in the Mean Power Output category with a score of 11.5. His peak performance also did well with his highest mark of 16.5 watts/kg ranked in a tie for fifth.

Cozens completed 13 consecutive pull ups to rank in a tie for fourth. He also showcased his strength at the grip test, ranking third on the left hand and in a tie for sixth on the right hand. Cozens also placed in the top 10 for the standing long jump, recording a mark of 112.0 inches.

Winnipeg ICE captain Peyton Krebs impressed with 15 consecutive pull ups to rank in a tie for second in that part of the combine. He also ranked in a tie for fourth with a squat jump of 18.14 inches and placed eighth in the Wingate test with a peak power output of 15.8 watts per kilogram.

Prince George Cougars goaltender Taylor Gauthier led an impressive performance from WHL goaltenders at the event with a squat jump of 23.19 inches, ranking first among all attending players.

Not to be outdone, Medicine Hat Tigers goaltender Mads Søgaard ranked fourth with a wingspan of 79 inches and Vancouver Giants goaltender Trent Miner tied for second in the VO2MAX test with a 61.0 mL/Kg/Min. Søgaard also ranked in a tie for four in the left-hand grip.

Fresh off a WHL Championship and an appearance at the 2019 Memorial Cup presented by Kia, Brett Leason brought forth another strong performance to the floor of the combine.

Leason ranked first in left-hand grip and fourth in right-hand grip. He tied for fourth in the pro agility shuttle run to the right with a time of 4.35 seconds. His wingspan also measured a the sixth highest, coming in at 78.50 inches.

Saskatoon Blades forward Kirby Dach finished tied with Leason in the shuttle run to the right while also ranking seventh with a peak power output of 15.9 in the win gate test.

The Kelowna Rockets also brought forth a strong performance thanks to defenceman Kaedan Korczak.

Sharing a spot with teammate Nolan Foote, the pair ranked in a tie for eighth in wingspan, posting matching totals of 78.00.

One of the top risers during the 2018-19 WHL Regular Season, Moose Jaw Warriors forward Brayden Tracey ranked in a tie for seventh with a 4.36 second shuttle run to the left.

Check out the best results from WHL players below: