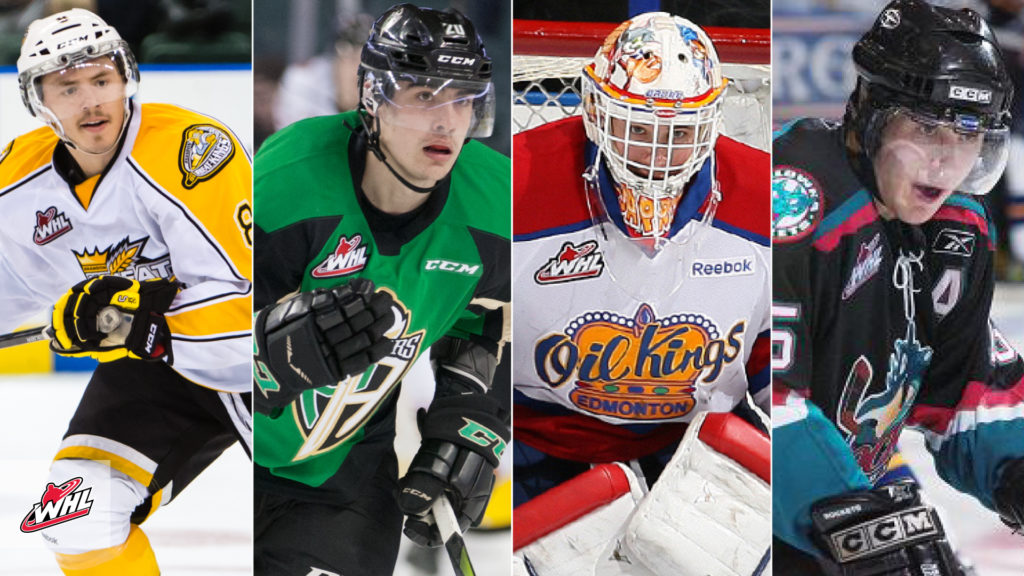 Winning a pair of WHL Championships and a Memorial Cup, Tyler Spurgeon played a key role in the success of the Kelowna Rockets during the early 2000s. With the Rockets looking to defend their Memorial Cup and also looking to regain the title of WHL Champion, they claimed the second-best record in the entire WHL during the 2004-05 WHL Regular Season. They then bypassed the Vancouver Giants, Seattle Thunderbirds, and Kootenay ICE to return to the WHL Championship Series, taking on the Brandon Wheat Kings.

On May 7, 2005, Tyler Spurgeon scored his 10th goal of the 2005 WHL Playoffs in a 4-1 win against the Brandon Wheat Kings in Game 2 of the 2005 WHL Championship Series. With 11 players reaching double-digit points for the Rockets in the 2005 WHL Playoffs, there was no shortage of offensive contributors. Coming off a 21-goal performance in the regular season, Spurgeon tallied 11 goals to rank second on the team in that category and was one of just two Rockets to record double-digit goals that playoffs. In the game in question, Spurgeon scored the first goal of the contest.

Spurgeon collected 124 points (43G-81A) in 212 WHL regular season games with the Rockets. He also added 36 points (17G-19A) in 72 WHL playoff games. An eighth-round selection of the Edmonton Oilers at the 2004 NHL Draft, Spurgeon played professionally in North America and has since spent the majority of the past 10 seasons playing in Austria’s Hockey League, commonly known as the EBEL. He’s served as captain of HC Innsbruck for the past four seasons. Playing with Klagenfurter AC in 2012-13, he won a league championship. 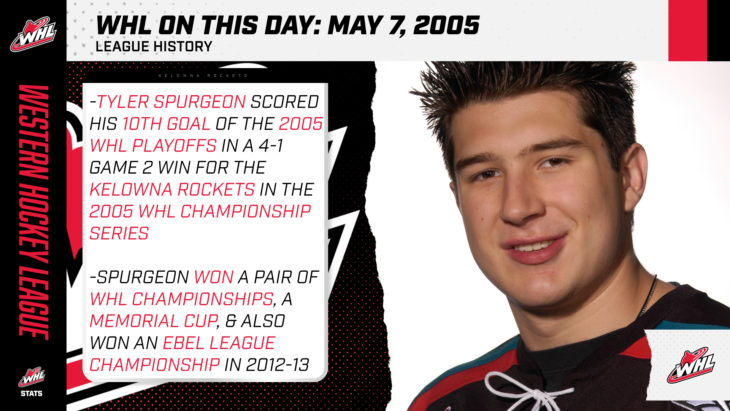 The period of 2012 to 2014 will always hold up strong in the memory of the Edmonton Oil Kings. Having won their first WHL Championship in 2012 and lost in the WHL Championship Series in 2013, the 2014 matchup against the Portland Winterhawks served as another battle between two talented Clubs to decide the league champion. Goaltender Tristan Jarry was one of the Oil Kings’ constants throughout those years and took over for the majority of starts between the pipes starting in the 2013-14 WHL Regular Season.

On May 7, 2014, Jarry posted a 26-save shutout in a 2-0 win for the Oil Kings in Game 4 of the 2014 WHL Championship Series. After dropping the first two games in Portland, the Oil Kings answered back with a 3-2 win in Game 3 the night before. Jarry and the Oil Kings held the Winterhawks off the scoresheet following 13-shot first period in Game 4. Jarry then shut the door on five shots in the second and eight more in the third for his third shutout of the 2014 WHL Playoffs. The win was the second of three straight by Edmonton in the series and helped turn the tide before they won in seven games. 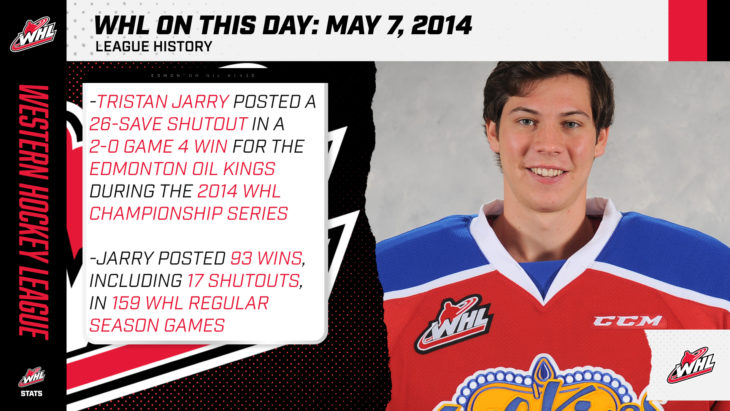 The Brandon Wheat Kings rose to the top of the WHL’s Eastern Conference in the 2014-15 and 2015-16 WHL Regular Seasons. Reaching the WHL Championship Series in both years, they had to swallow a bitter pill the first time around in a sweep at the hands of the Kelowna Rockets. In 2016 though, they came back determined to claim their first WHL Championship since 1996.

On May 7, 2016, Jayce Hawryluk scored in overtime of Game 2 of the 2016 WHL Championship Series to give the Wheat Kings a 3-2 win and a 2-0 lead in the series. For a second-straight game, the Wheat Kings successfully erased a one-goal deficit on home ice. The night before, Hawryluk had assisted on Nolan Patrick’s game-tying goal in the third period of Game 1. With his team down 2-1 in Game 2, Hawryluk once again helped set up the game-tying goal and then scored 6:56 into overtime. The following Friday, Hawryluk helped cement the Wheaties’ WHL Championship win with six points (3G-3A) in an 8-4 win.

For his WHL career, Hawryluk posted 278 points (119G-159A) in 232 WHL regular season games, adding 61 points (22G-39A) in 45 WHL playoff games. Chosen in the second round, 32nd overall, by the Florida Panthers at the 2014 NHL Draft, Hawryluk began his professional hockey career in the 2016-17 season. On December 23, 2018, Hawryluk scored his first two NHL goals in a game against the Chicago Blackhawks. Recently joining the Ottawa Senators, the 24-year-old Hawryluk has recorded 22 points (10G-12A) in 68 NHL regular season games. 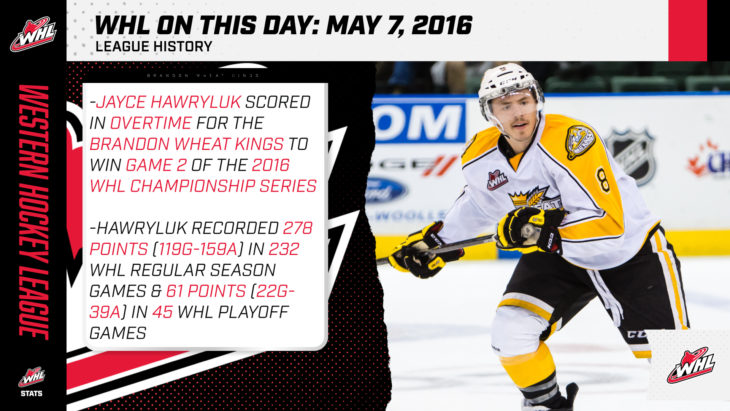 A memorable part of the 2018-19 WHL season was the emergence of Brett Leason to help power the offence of the Prince Albert Raiders. Acquired from the Tri-City Americans during the 2017-18 WHL Regular Season, Leason broke out with 89 points (36G-53A) in 55 WHL regular season games, represented Canada at the 2019 IIHF World Junior Championship and played a key role in the Raiders’ run to claiming the WHL Championship last season.

On May 7, 2019, Leason tallied four points (2G-2A) in an 8-2 win for the Raiders against the Vancouver Giants in Game 3 of the 2019 Rogers WHL Championship Series. With the two teams earning a split from the first two games of the series in Prince Albert, the teams went into the pivotal Game 3 looking for a sign of strength. The Raiders found that strength to the tune of seven goals in the first period. Leason scored the third and fifth goals of the period for the Raiders and assisted on their fourth and eighth goals. While the series would eventually go the distance, the performance showcased just how dominant the Raiders and Leason were that season.

For his WHL career, Leason totalled 140 points (60G-80A) in 190 WHL regular season games and 28 points (10G-18A) in 33 WHL playoff games between the Raiders and Americans. At the 2019 NHL Draft, the Washington Capitals selected Leason in the second round, 56th overall. Playing his first season in the professional ranks with the American Hockey League’s Hershey Bears, Leason recorded 14 points (3G-11A) in 50 games this season. 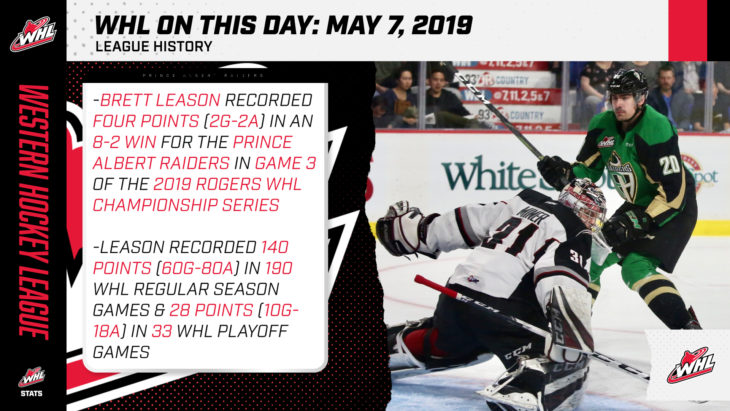