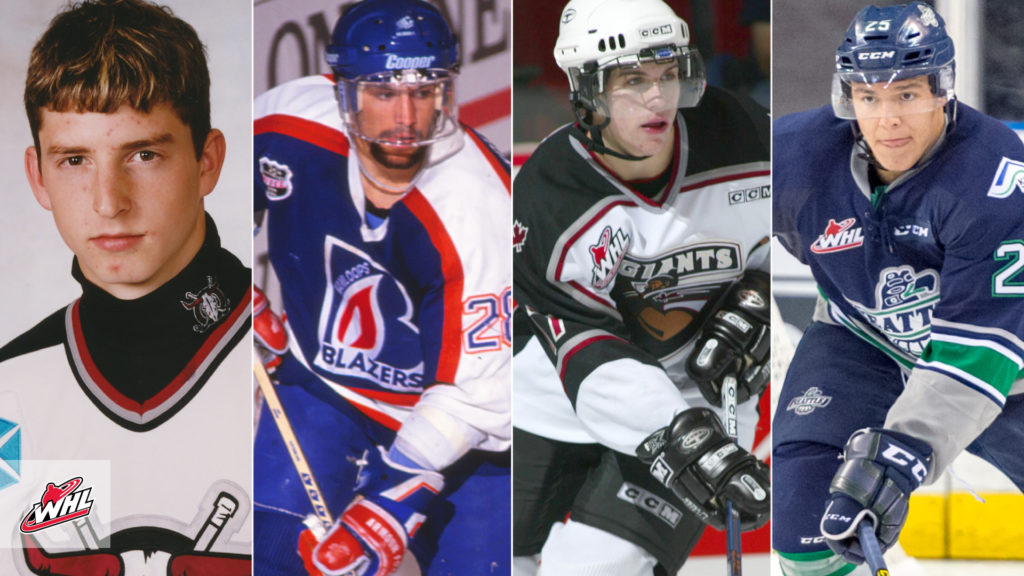 Officially becoming a member of the Hockey Hall of Fame in 2013, there’s no questioning the legendary status of Scott Niedermayer’s hockey career in the WHL, National Hockey League, or on the international stage. Back in 1992 though, Niedermayer and the Kamloops Blazers were a dominant team in search of reclaiming the title of WHL Champion. Having won it in Niedermayer’s first season back in 1989-90, the Blazers were beaten in the Western Conference Championship in 1991 but came back ready for another shot in 1992.

On May 5, 1992, Niedermayer recorded four points (1G-3A) in an 8-0 win for the Blazers against the Saskatoon Blades. Niedermayer assisted on both first period goals, scored the team’s third goal of the second period and assisted on their second of three goals in the third. The Blazers would win the WHL Championship Series in seven games and later claim the 1992 Memorial Cup to continue one of the strongest stretches by a team in the history of the Canadian Hockey League. From 1990 to 1995, the Blazers won four WHL Championships and three Memorial Cups.

Having been chosen with the third-overall selection at the 1991 NHL Draft by the New Jersey Devils, Niedermayer made the permanent leap to the NHL for the 1992-93 NHL Regular Season. He’d go on to play a key role in all three Stanley Cup victories for the New Jersey Devils while later captaining the Anaheim Ducks to their Stanley Cup in 2007. Appearing in 1,263 NHL regular season games, Niedermayer recorded 740 points (172G-568A). A former WHL Scholastic Player of the Year, Niedermayer provided a key role on the blue line for Canada at the 2002 and 2010 Winter Olympic Games, claiming a Gold Medal both times. 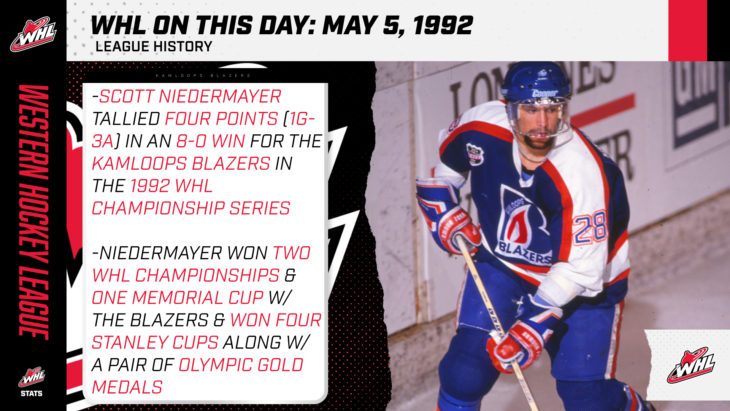 Beginning play in the 1992-93 WHL Regular Season, the Red Deer Rebels had found some playoff success but still yearned for their first WHL Championship as a Club. That path presented itself in 2001 as the Rebels stormed through the Eastern Conference, winning series against the Lethbridge Hurricanes, Calgary Hitmen and Swift Current Broncos to vault them into their first-ever WHL Championship Series. While he wasn’t the team’s top offensive option at the time, Colby Armstrong had posted a strong 78 points (36G-42A) in 72 games during the regular season and was earning strong attention for the 2001 NHL Draft.

On May 5, 2001, Armstrong tallied two points (1G-1A), including a short-handed goal, in Game 2 of the 2001 WHL Championship Series. After a narrow win in Game 1, the Rebels continued that success into Game 2. Kyle Wanvig opened the scoring on the power play 12:56 into the second period, followed 61 seconds later by Armstrong’s short-handed goal to double their lead. With the Winterhawks getting on the board in the third in a comeback effort, Armstrong had the lone assist on Andrew Bergen’s eventual game-winning goal. Exactly a week later, the Rebels had claimed the WHL Championship and would eventually win the 2001 Memorial Cup as well.

As for Armstrong, his strong season helped convince the Pittsburgh Penguins to choose him with the 21st-overall selection at the 2001 NHL Draft. Playing in 476 NHL regular season games, Armstrong tallied 209 points (89G-120A) while appearing for the Penguins, Atlanta Thrashers, Toronto Maple Leafs and Montreal Canadiens. In 2007, Armstrong scored the championship-winning goal at the 2007 IIHF World Championship in Russia. 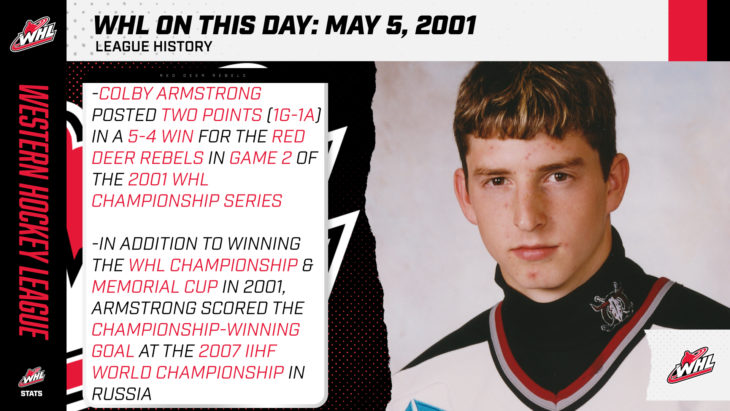 Through their first four seasons in British Columbia’s Lower Mainland, qualifying for the WHL Playoffs wasn’t a problem for the Vancouver Giants. Outside of their first season, a fair exception, they had a three-year stretch of pursuing the WHL Championship into the spring. However, their longest playoff run through those first four seasons had lasted 11 games. That was until the 2005-06 WHL season, when the Giants surged to 47 wins and their first of four-straight seasons of 100 points or more. The Giants then posted a 12-4 record to claim the Western Conference Championship, advancing to the WHL Championship Series for the first time in their young history.

On May 5, 2006, Gilbert Brulé tallied three points (2G-1A) in Game 1 of the 2006 WHL Championship Series. After being selected sixth overall by the Columbus Blue Jackets at the 2005 NHL Draft, Brulé stuck with the Blue Jackets for the start of the season, but eventually returned to the Giants. Taking on the Moose Jaw Warriors in the series, Brule scored the Giants’ first-ever goal in a WHL Championship Series game and helped lead them to the win on home ice at the Pacific Coliseum. Five days later, the Giants hoisted the WHL Championship for the first and only time in their history.

Brule has appeared in 299 NHL regular season games to date between the Blue Jackets, Edmonton Oilers and Arizona Coyotes, posting 95 points (43G-52A). Most recently, Brule has played the last six seasons in the Kontinental Hockey League. Brule has also represented Canada on the international stage, helping them earn bronze at the 2018 Olympic Winter Games. 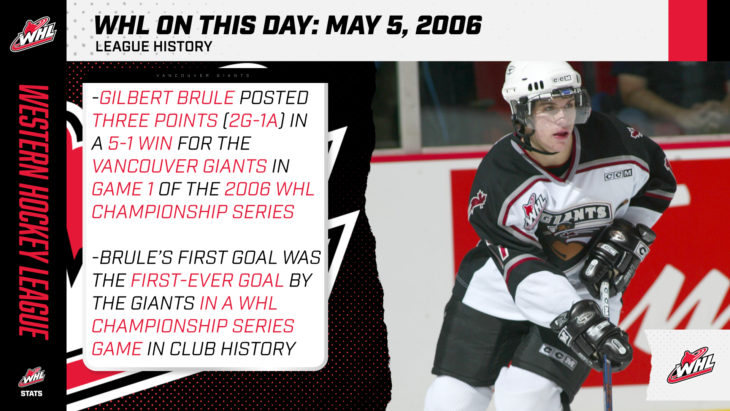 With a passionate fanbase backing them and several star players on the roster, it’s unlikely that the 2016-17 Seattle Thunderbirds will soon be forgotten. Even with the setback of their loss in the 2016 WHL Championship Series, the Thunderbirds came ready to play for the 2016-17 season. One of their offensive drivers throughout the season was 19-year-old Ethan Bear. Ranking third in scoring among all WHL defencemen with 70 points (28G-42A), he helped them place second in the U.S. Division before powering their way back to the Rogers WHL Championship Series in 2017.

On May 5, 2017, Bear recorded two points (1G-1A) as the Thunderbirds won Game 1 of the 2017 Rogers WHL Championship Series by a 2-1 score against the Regina Pats. Bear had 16 points (5G-11A) as the Thunderbirds were crowned as Western Conference Champions. In Game 1, he continued his strong play with the opening goal of the series and the primary assist on Donovan Neuls’ game-winning goal 14 seconds into overtime. Bear would eventually factor into the scoresheet of all six games, posting 10 points (1G-9A) in the series to finish with 26 points (6G-20A) in 17 games, leading all WHL defencemen in scoring. 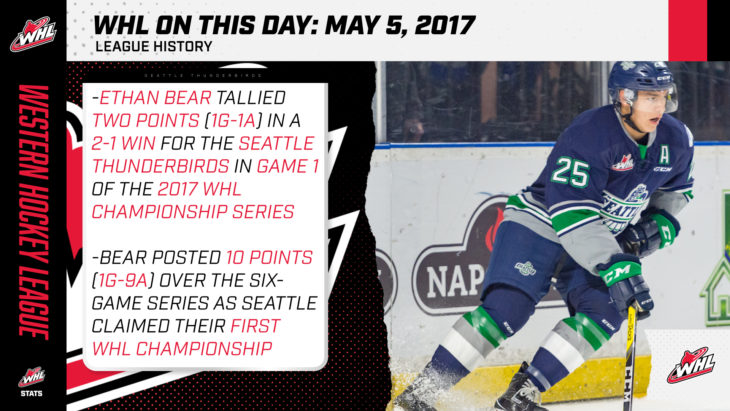 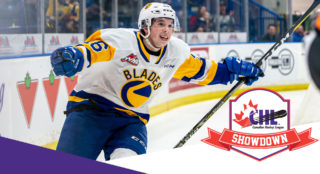