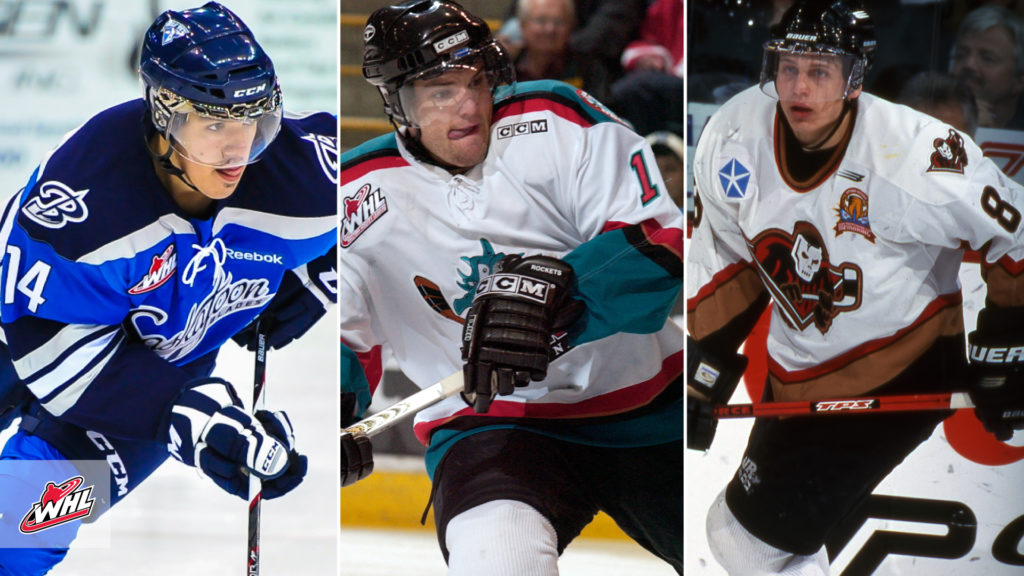 As the Calgary Hitmen surged to a 51-13-8 record in the 1998-99 WHL Regular Season, Pavel Brendl made one of the more impressive debuts that season in the entire Canadian Hockey League. The forward from the Czech Republic was chosen 34th overall at the 1998 CHL Import Draft and posted 134 points (73G-61A) in 68 games as the Hitmen earned the WHL’s best record. He added 46 points (21G-25A) in 20 games as the Hitmen won the 1999 WHL Championship, losing a grand total of five games throughout the four rounds. That victory advanced the Hitmen to the 1999 Memorial Cup.

On May 19, 1999, Brendl scored twice in a 3-1 win for the Hitmen against the Acadie-Bathurst Titan. The opening goal by Alain Charbonneau put the Hitmen down a goal, but Brendl scored in the final minute of the first and then 3:07 into the third for the game-winning goal at the Ottawa Civic Centre. Brad Moran added an empty-net goal, but both of Brendl’s strikes against Titan goaltender Roberto Luongo helped propel the Hitmen to a win. The Hitmen would advance to the championship final but fell 7-6 in overtime to the Ottawa 67s. 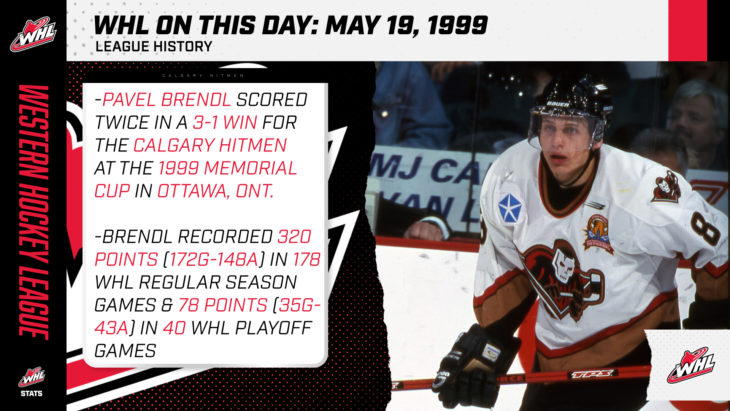 Simon Ferguson’s WHL career began with the Lethbridge Hurricanes when he was chosen in the fifth round, 75th overall, of the 1998 WHL Bantam Draft. During the 2002-03 WHL Regular Season, the Kelowna Rockets were looking to add some grit and offensive ability to round out their lineup, choosing to acquire the Prince Rupert, B.C. product. The Rockets proceeded to capture the B.C. Division with a 51-14-6-1 record before going winning the 2003 WHL Championship. That sent the Rockets to their first-ever Memorial Cup in that same year.

On May 19, 2003, Simon Ferguson scored the game-winning goal for the Rockets in a 3-2 win over the Quebec Remparts. Kiel McLeod had put the Rockets ahead 1-0 in the first, but goals by Timofei Shishkanov and Alexandre Rouleau put the Remparts up 2-1 late in the second. The Rockets had an immediate response, tying the game on a Tyler Mosienko goal before Ferguson scored 47 seconds later to give the Rockets their lead back after 40 minutes. Having started 0-1 at the tournament, the Rockets needed a win and got it from the stick of Ferguson. Eventually progressing to the tournament’s semi-final at Colisee Pepsi, the Rockets fell 2-1 to the Hull Olympiques to see their season end.

That wasn’t the end of Ferguson’s contributions to the Rockets. In his overage season, he helped the Rockets claim the 2004 Memorial Cup to add to his WHL Championship from 2003. Between the Hurricanes and Rockets, Ferguson tallied 161 points (61G-100A) in 319 WHL regular season games. He also had 23 points (10G-13A) in 45 WHL playoff games. Ferguson’s professional hockey career saw him play across three continents, most recently with the Kowloon Warriors in Hong Kong during the 2016-17 season. He’s since returned to his home province of British Columbia to coach. 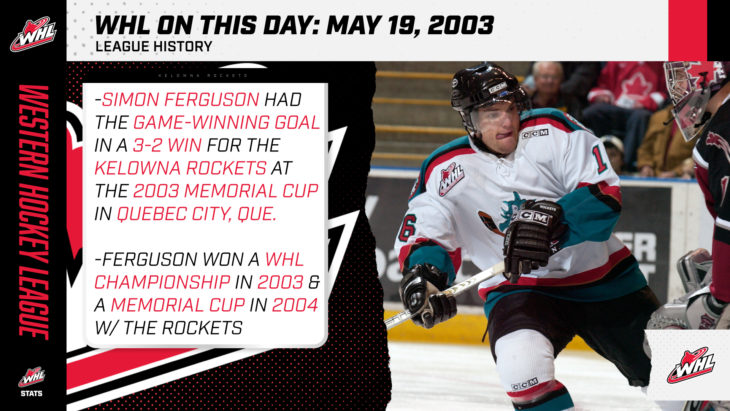 At the 2010 CHL Import Draft, the Saskatoon Blades chose forward Matej Stransky in the second round, 61st overall. He’d go on to become one of the club’s offensive leaders in his three seasons with the Blades. Beginning play with them during the 2010-11 WHL Regular Season, Stransky’s final season with the Blades saw him tally 85 points (40G-45A) in 72 games as the Blades roared to a 44-22-2-4 record and were preparing to host the 2013 Memorial Cup.

On May 19, 2013, Stransky scored a pair of goals as the Blades beat the Halifax Mooseheads 5-2 in round-robin play at the 2013 Memorial Cup. After dropping their first game by a 3-2 score, the Blades went into their second game looking for a spark. They got that and more as Stransky scored 12:11 into the first period and 18:45 into the second to have the only two goals from either side. The Blades then scored three times in the third to win by the 5-2 score. Though the Blades fell in the tie-breaker game, they were the only team to beat the eventual champion Mooseheads at the tournament.

Stransky was selected by the Dallas Stars in the sixth round, 165th overall, of the 2011 NHL Draft. He finished his WHL career in 2013 with 192 points (93G-99A) in 213 WHL regular season games. He also added 11 points (4G-7A) in 18 WHL playoff games. Playing in the Stars’ system, Stransky spent four seasons with the American Hockey League’s Texas Stars, winning a Calder Cup in the 2013-14 season. He’s since returned to his home Czech Republic, spending the 2019-20 season with HC Ocelari Trinec. 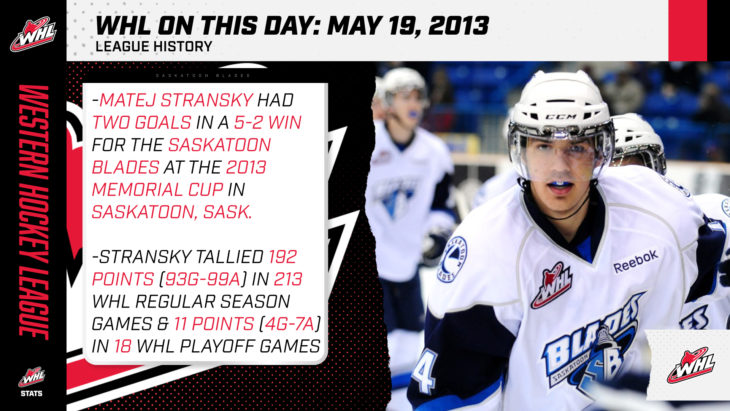