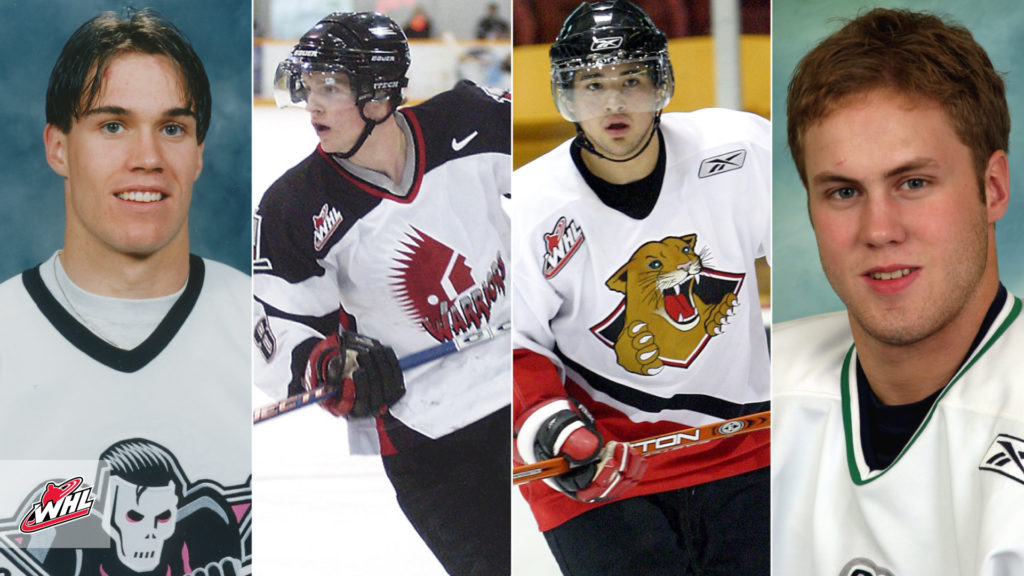 Welcome to the first edition of WHL On This Day, where we look day at notable accomplishments of Western Hockey League Alumni. On Tuesday and Thursdays, we’ll breakdown some of the best moments to take place on that specific day in WHL history, adding context to the rest of their season and career. Be sure to share your favourite moments from a specific day on social media using #WHLOTD!

1999 – Chris Nielsen, Calgary Hitmen
Some coaches live by the adage that the best defence is good offence and March 24, 1999 was a prime example of that.

In their run to capturing the WHL Championship, the Calgary Hitmen opened the 1999 WHL Playoffs with a 7-5 win over the Kootenay ICE, eventually winning the series in seven games.

A key part of Game 1 was an eight-goal second period, with the Hitmen striking five times and the ICE accounting for three goals. In the middle of all that action was New York Islanders draft choice Chris Nielsen, who scored Calgary’s third and fifth goals of the game, also picking up an assist on their fourth goal for the three-point period.

Nielsen would finish the 1999 WHL Playoffs with 16 points (11G-5A) in 21 games. He also earned the Daryl K. (Doc) Seaman Trophy as WHL Scholastic Player of the Year in back-to-back seasons as well as the Doug Wickenheiser Memorial Trophy as WHL Humanitarian of the Year in 2000. 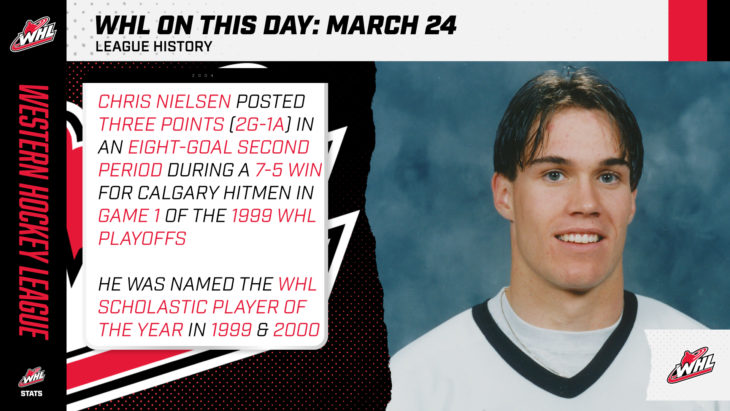 2004 – Kyle Brodziak, Moose Jaw Warriors
Leading his team to an East Division title, Kyle Brodziak had one of the best performances of the 2003-04 WHL Regular Season, placing third in league scoring with 93 points (39G-54A).

Finishing second in the Eastern Conference, the Warriors took on their Trans-Canada rivals in the Regina Pats and had already jumped out to a 3-0 lead in the series. On March 24, 2004, Brodziak and the Warriors completed the series sweep with a 4-1 victory at the Brandt Centre in Regina, Sask.

Brodziak contributed to the effort with a pair of goals to help clinch the win, striking once in the first and once in the second. Finishing second in team scoring during the 2004 WHL Playoffs, Brodziak recorded a point in each of his team’s first six games.

The seventh-round selection of the Edmonton Oilers at the 2003 NHL Draft has appeared in 917 NHL regular season games to date. 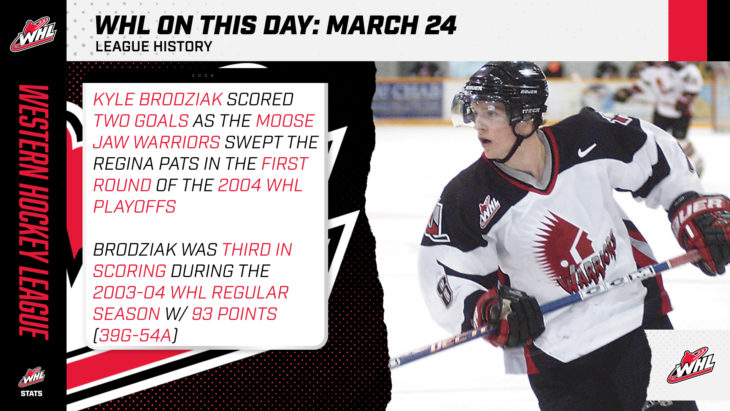 2007 – Devin Setoguchi, Prince George Cougars
After three productive seasons with the Saskatoon Blades, Devin Setoguchi found himself a member of the Prince George Cougars to begin the 2006-07 WHL Regular Season. The first-round selection of the San Jose Sharks from 2005 kept up his strong production with 65 points (36G-29A) in 55 games to give the Cougars third place in the B.C. Division.

Taking on the Kamloops Blazers, the Cougars faced a tough task, but had claimed a win in Game 1 thanks to an overtime goal by Nick Drazenovic.

Eager to earn a win in Game 2, the Blazers bolted out to a 4-2 lead early in the second period, but the Cougars were able to dig deep for a comeback effort. After tying up the game 4-4 through two periods, the game spilled into overtime, where Setoguchi notched his second goal of the playoffs 4:17 into the extra frame. Heading back to Prince George, B.C., the Cougars were firmly in control and swept the series in four games.

Setoguchi would go on to appear in 516 games NHL regular season games, last appearing with the Los Angeles Kings in the 2016-17 season. 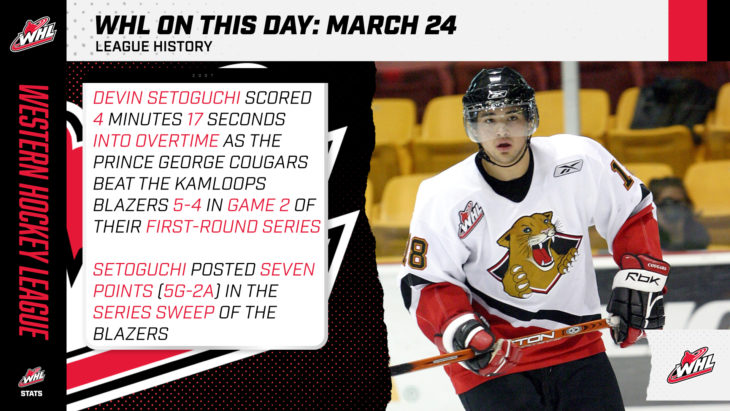 Through two games though, it looked like the Rockets were going to sweep their U.S. Division opponent, claiming both wins south of the 49th parallel. On Monday, March 24, 2008, the Thunderbirds took to the ice at Prospera Place looking to avoid the dreaded 3-0 deficit in the series.

Helping to turn the tide in the series, the Thunderbirds were powered offensively by a hat trick from overage forward David Richard. The winger had 22 goals during the 2008-09 WHL Regular Season and stepped up with a hat trick in a 3-2 Game 3 win.

Richard helped his team to an early lead by scoring 31 seconds into the game and again 12:09 into the second period. With Evan Bloodoff and Jamie Benn scoring for the Rockets, the game ended up in extra time, where Richard completed his hat trick 15:12 into the extra period.

The Saskatoon, Sask. product would add goals in Game 4 as well as Game 5 wins en route to the series victory for the Thunderbirds. 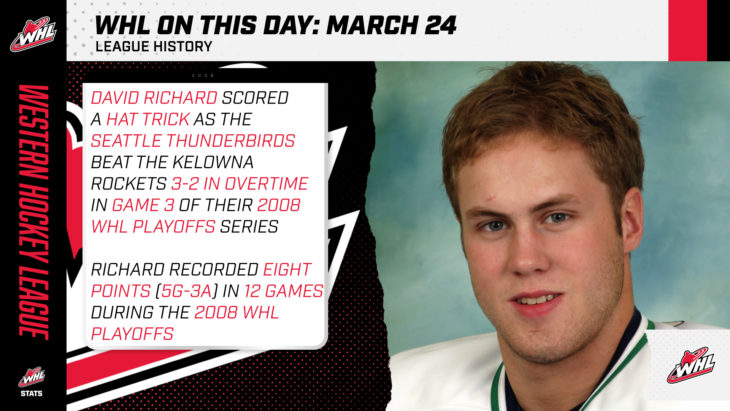 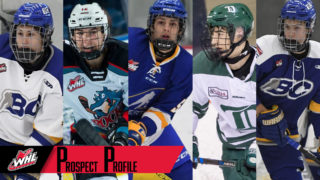