WHL On This Day: April 9 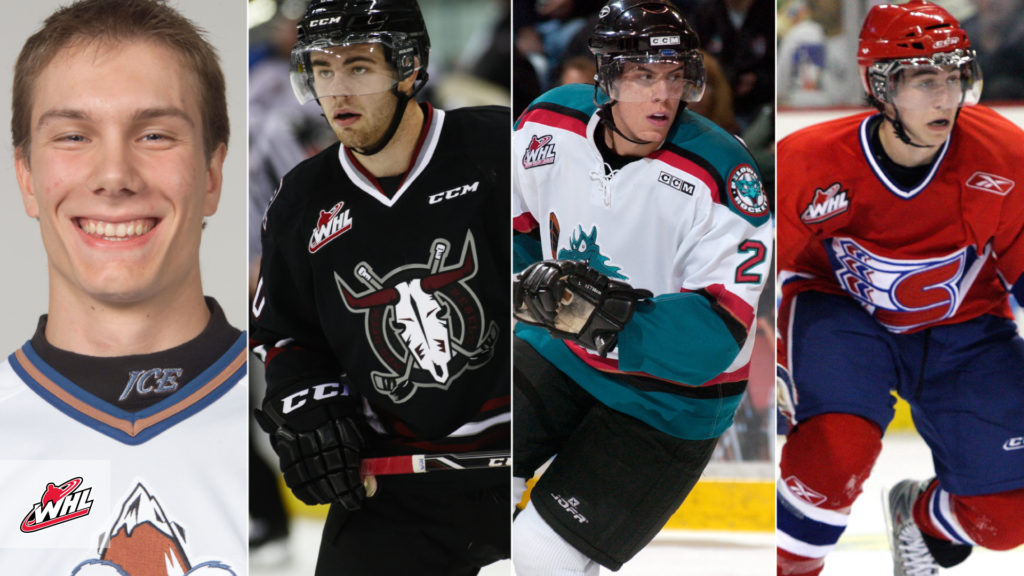 The 2003-04 Kelowna Rockets roared to the best record in the WHL during the regular season and swept the Kootenay ICE in the first round of the 2004 WHL Playoffs. Setting up a second-round matchup against the Tri-City Americans, the series followed a quirky path as the visiting team won the first four game of the series.

On April 9, 2004, defenceman Shea Weber scored a goal and an assist as the Rockets won the first home game of the series in a 7-2 result. Weber assisted on Kelowna’s second goal and later scored their fifth goal late in the second period. The multi-point performance was part of a huge playoffs for Weber, who recorded 17 points (3G-14A) as the Rockets advanced to the Western Conference Championship, eventually winning the Memorial Cup later in the spring. As for the series, the 3-2 edge earned by that 7-2 win was closed out two days later as the Rockets won their third road game of the series.

Following the team’s WHL Championship performance in 2005, Weber has enjoyed a prolific NHL career to date, spanning 990 regular season games with the Nashville Predators and Montreal Canadiens. He has 570 points (218G-352A) in that span, a pair of Olympic gold medals, and won the NHL’s hardest shot competition four times. Weber served as captain of the Predators for six season and has served as captain of the Canadiens since the start of the 2018-19 NHL Regular Season. 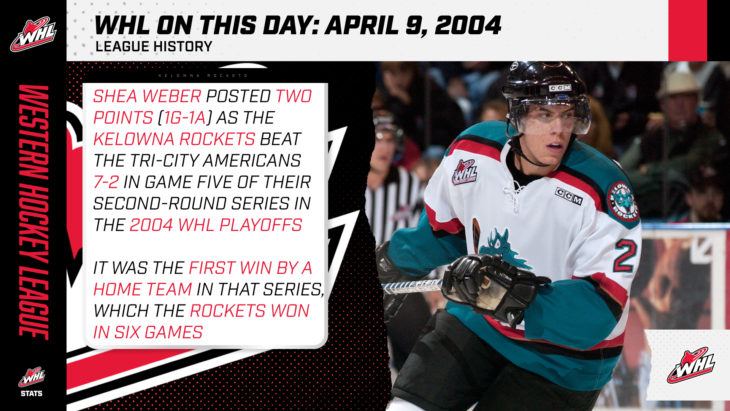 The 2004-05 Kootenay ICE held the top record in the WHL and had already cleared the first hurdle on their path to trying to win another WHL Championship, beating the Kamloops Blazers in six games to open the 2005 WHL Playoffs. In the second round, the ICE faced an Everett Silvertips team that had been to the WHL Championship Series in their first year of existence the previous season. Claiming a 4-2 win in Game 1, the ICE were looking for another win in Game 2.

On April 9, 2005, Martin Sagat boosted the ICE to a 4-1 win with a natural hat trick in the third period. Exactly 90 seconds after Ivan Baranka tied up the game in the third, Sagat scored his first of three goals in the contest to power the ICE to the win. That momentum helped them keep rolling to Everett as they won a pair of overtime games to sweep the series and advance to the Western Conference Championship. Though they ultimately fell to the Kelowna Rockets, the hat trick by Sagat was a highlight for the team during their run.

Chosen by the Toronto Maple Leafs at the 2003 NHL Draft, Sagat would play two seasons with the American Hockey League’s Toronto Marlies before returning to Europe, playing mainly in the Czech Republic. During the 2019-20 season, he appeared for HC Slavia Praha and Piráti Chomutov. 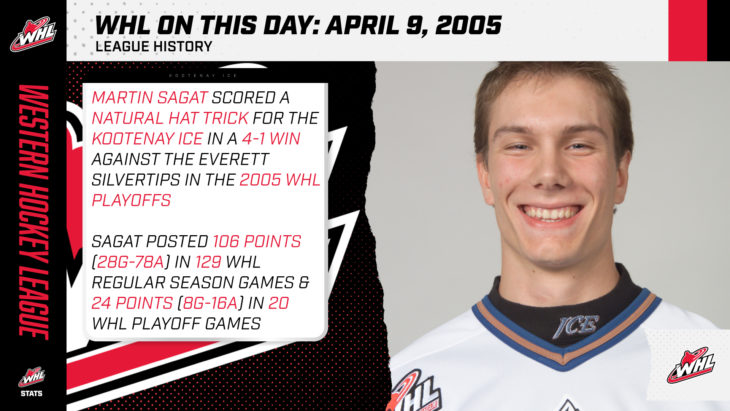 The Spokane Chiefs breezed through the first round of the 2008 WHL Playoffs with a four-game sweep of the Everett Silvertips. Taking on the defending Memorial Cup Champion Vancouver Giants, the Chiefs faced a formidable test in the second round as the teams split the first two games of the best-of-seven series south of the border.

On April 9, 2008, rookie Tyler Johnson scored the game-winning goal in a 3-2 win for the Chiefs in the pivotal third game of the series at the Pacific Coliseum. Despite a modest 35 points (13G-22A) in his rookie season, Johnson had just one assist through his first six games in the 2008 WHL Playoffs. Playing three-straight games in Vancouver, Johnson found the scoresheet in each of the contests as the Chiefs won twice on the road before closing out the series on home ice.

Winning a WHL Championship and Memorial Cup in 2008, Johnson was also named the Most Valuable Player of the 2008 WHL Playoffs. He scored a pair of game-winning goals in the WHL Championship Series, including the championship-winning goal. In March of 2011, Johnson signed with the Tampa Bay Lightning and won a Calder Cup with the American Hockey League’s Norfolk Admirals in 2012. Since then, he’s become a key part of the Lightning’s roster, recording 339 points (153G-186A) in 534 NHL regular season games. 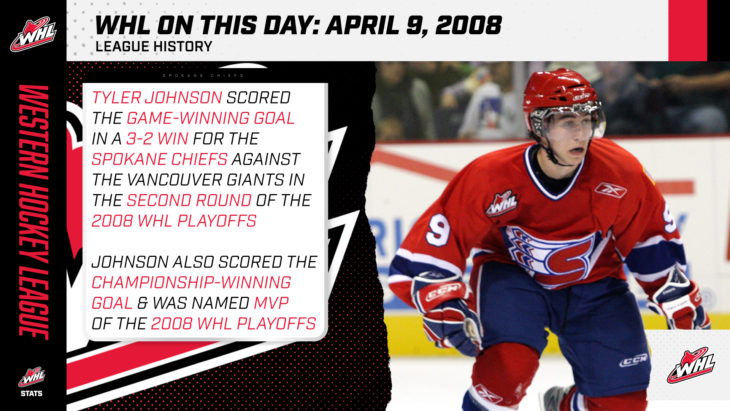 During the 2015-16 WHL season, the Red Deer Rebels and Regina Pats developed an even rivalry. In the four-game regular season series, each team won once on the road and once at home. In the first round of the 2016 WHL Playoffs, they each won their respective series in five games to set up a best-of-seven series between the two clubs.

On April 9, 2016, Evan Polei scored the game-winning goal in a 3-2 win to open the second round of the 2016 WHL Playoffs against the Pats. The Pats scored twice in the first followed by a pair of Rebel goals in the second. With the score tied in the third, Polei completed the comeback, giving the Rebels the first edge in the series. As it turned out, home-ice advantage would be critically import as all seven games of the series went the way of the hosts with the Rebels claiming the series win. Appearing in 17 WHL playoff games that season, Polei would have a breakout performance with 12 points (8G-4A), later adding a pair of goals in the 2016 Memorial Cup. 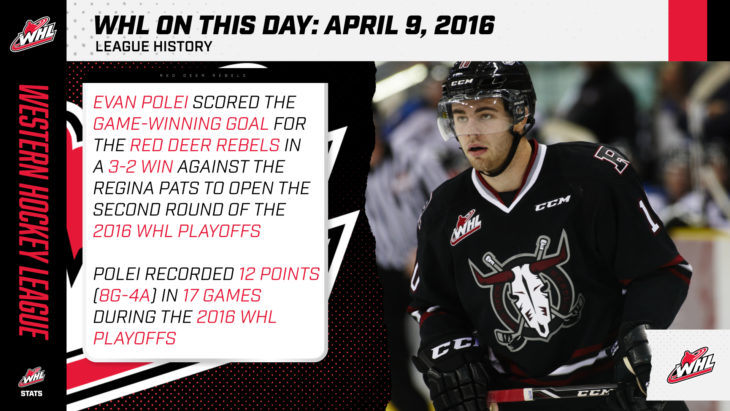