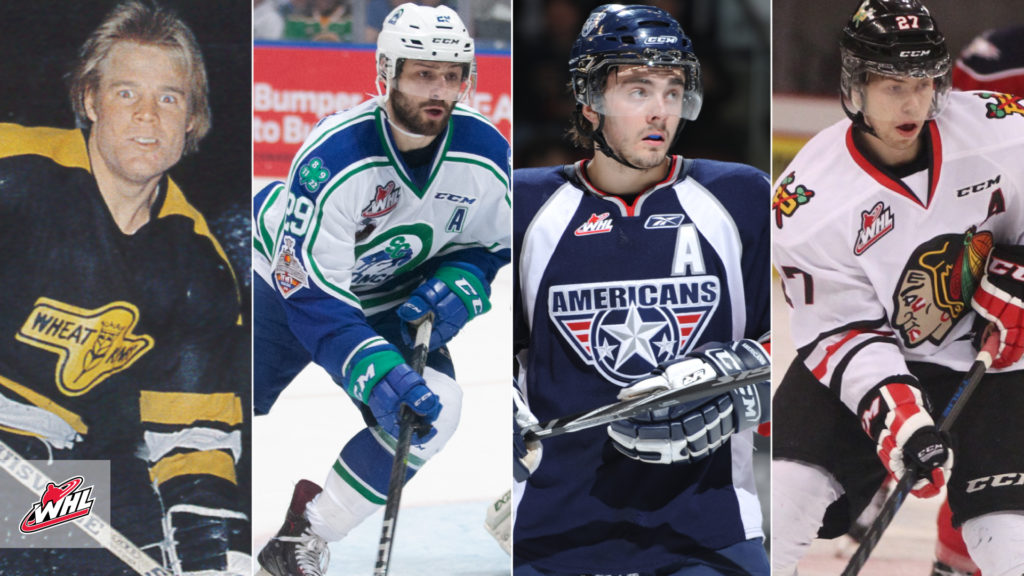 For fans of the offensive side of hockey, the Brandon Wheat Kings of the late 1970s were truly a sight to behold. For three-straight seasons from the start of the 1976-77 WHL Regular Season to the 1978-79 WHL Regular Season, the Wheat Kings finished first and second in the WHL scoring race, also claiming the third spot in two of those seasons. Brian Propp, Bill Derlago, Ray Allison, Laurie Boschman, Brad McCrimmon and many others caused havoc on defences throughout the WHL. Despite their success on the ice and individual awards, a WHL Championship is what eluded their grasp until 1979.

On April 28, 1979, Brian Propp scored the game-winning goal in a 3-1 win against the Portland Winterhawks during the 1979 WHL Championship Series. With the Winterhawks and Wheat Kings tied 1-1 through 40 minutes, the Wheaties pressed for the win in the third. They subsequently received goals from Propp and Dave Chartier to provide the difference. Rick Knickle held the Winterhawks off the board in the critical final period to contribute to the winning effort as well. The Wheat Kings would go on to claim their first of three WHL Championships.

For Propp, the leading scorer in the Wheat Kings’ history and product of Lanigan, Sask., he recorded 1,004 points (425G-579A) in 1,016 NHL regular season games, primarily played with the Philadelphia Flyers. He also played with the Boston Bruins, Minnesota North Stars, and Hartford Whalers before concluding his NHL career in the 1993-94 NHL season. 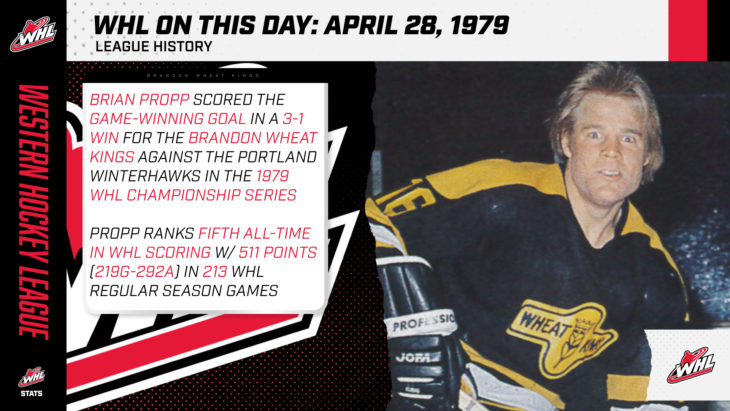 The Tri-City Americans and Spokane Chiefs battled for supremacy in the U.S. Division during the 2007-08 WHL Regular Season. Throughout the 72-game season, the Americans came out ahead with 108 points thanks to a 52-16-2-2 record. Helping power that offence was a young Kruise Reddick, who posted 74 points (23G-51A) in 72 games to rank third in team scoring in just his second year with the Club. Through his first 14 games of the 2008 WHL Playoffs however, Reddick had just compiled four points (2G-2A) and the Americans were looking for a spark to stay alive.

On April 28, 2008, Reddick recorded a goal and an assist as the Americans beat the Spokane Chiefs 2-1 in overtime of Game 6 in the 2008 Western Conference Championship. The Chiefs pushed the Americans to the brink of elimination with a win in Game 5 on the road, but the Americans were determined to return the favour. Trailing 1-0 through 20 minutes in Spokane, Reddick had the lone assist on Petr Stoklasa’s game-tying goal in the second period before Reddick scored 4:39 into the first overtime to force a seventh game. Though the Americans would eventually fall in Game 7 the next night, that season helped play a part in the foundation for their run to the WHL Championship Series in 2010.

Upon the completion of his WHL career in 2011, Reddick utilized his WHL Scholarship at the University of Alberta, captaining the Golden Bears for two years and playing an integral role in three Canada West championships and a pair of U SPORTS national championships. For the past three seasons, he’s played in the EIHL with the Guildford Flames. 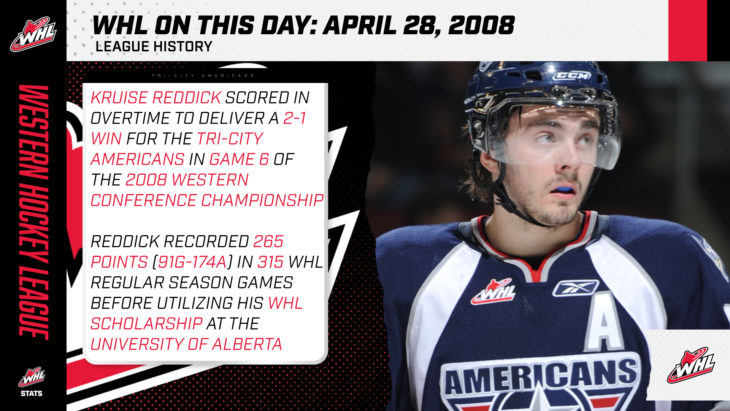 Throughout his time with the Portland Winterhawks, Oliver Bjorkstrand provided a key offensive presence for the U.S. Division Club. The 2014-15 WHL season marked his last in the WHL and he provided career-best totals with 118 points (63G-55A) in 59 games. Leading the Winterhawks to the second-best record in the U.S. Division that season, Bjorkstrand helped to power the Winterhawks past the Seattle Thunderbirds and Everett Silvertips before taking on the Kelowna Rockets in the Western Conference Championship.

On April 28, 2015, Bjorkstrand recorded four points (2G-2A) in a 7-3 win for the Winterhawks against the Rockets in Game 3 of the 2015 Western Conference Championship. In what would prove to be their last win of the season, the Winterhawks struck for seven goals on home ice. The seven goals were the most scored against the eventual WHL Champion Rockets during the 2015 WHL Playoffs.

Concluding his WHL career with 290 points (144G-146A) in 193 WHL regular season games and 77 points (37G-40A) in 59 WHL playoff games, Bjorkstrand is one of the Club’s top players of the past decade and all-time. The 25-year-old has also thrived in the professional ranks with the Columbus Blue Jackets, posting 133 points (65G-68A) in 246 WHL regular season games. 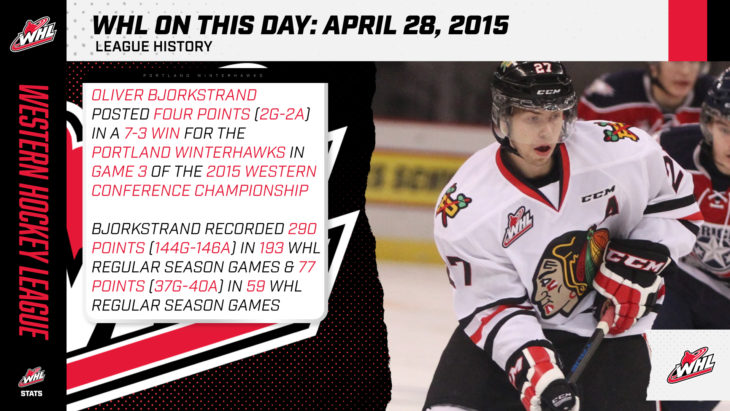 The Swift Current Broncos run to the WHL Championship in 2018 would not have been possible without the help of a pair of former Lethbridge Hurricanes. With forward Giorgio Estephan and goaltender Stuart Skinner acquired by the Broncos ahead of the 2018 WHL Trade Deadline, the Broncos powered to the second-best record in the East Division and by late April had progressed to the Eastern Conference Championship to face the former team of Estephan and Skinner.

On April 28, 2018, Estephan tallied three points (2G-1A) as the Broncos defeated the Hurricanes 4-3 in Game 5 of the Eastern Conference Championship. The win was their seventh home triumph of the 2018 WHL Playoffs and saw Estephan play a critical role. He drew the primary assist on the opening goal of the game by Max Patterson, put the Broncos up 2-1 late in the second period, and scored again to double their lead to 4-2 6:41 into the third period. Scoring the game-winning goal, Estephan put the Broncos up 3-2 in the series, which they’d close out two days later on the road.

That success caught the attention of the Toronto Maple Leafs organization, who signed the Edmonton, Alta. product in July 2018. Playing with the ECHL’s Newfoundland Growlers in their inaugural season, he posted 53 points (20G-33A) in 69 games during the regular season. He added 24 points (9G-15A) in the playoffs to help the Growlers capture the Kelly Cup as league champions. This season with the ECHL’s Growlers, Estephan had 52 points (18G-34A) in 44 games and tallied two points (1G-1A) in eight games with the American Hockey League’s Toronto Marlies. 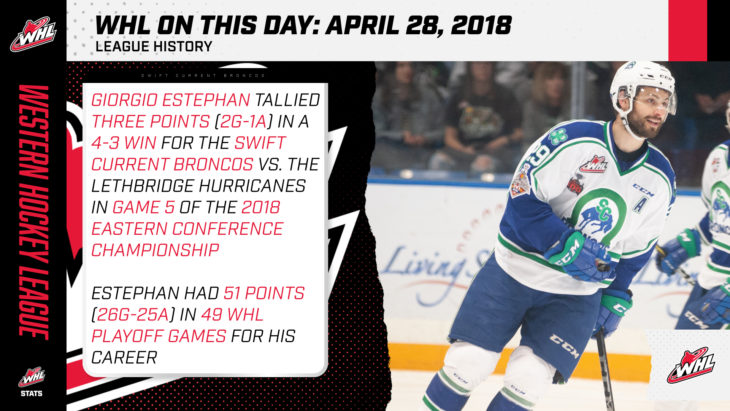