WHL On This Day: April 2 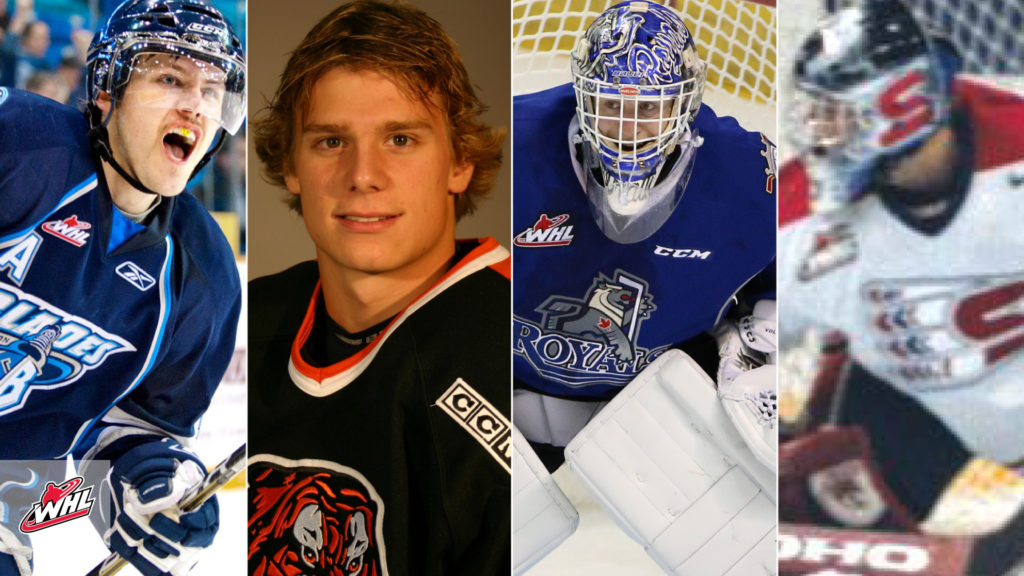 Regardless of the era they’re in, the Spokane Chiefs and Portland Winterhawks have produced some classic matchups in the WHL Playoffs. In 2003, they added to that list with a thrilling seven-game series that went the way of the Chiefs. It didn’t look that way for a while though as a double overtime win in Game 4 by the Winterhawks on the road put them on the cusp of clinching the series victory.

Following a 64-save performance in the double-overtime loss, the Chiefs stuck with goaltender Barry Brust. He delivered over the next three games as the Chiefs erased a 3-1 deficit to claim the series win in seven games. The Game 7 win fell on April 2, 2003 as the Chiefs doubled up the Winterhawks 4-2 at the Spokane Veterans Memorial Arena. In those three wins, Brust posted a 2.28 goals-against average and stopped 91 of 98 shots for a 0.929 save percentage to guide his team to the next round.

Overall, Brust appeared in 187 WHL regular season games, posting a 76-67-13 record, 2.92 GAA, 0.900 save percentage, and three shutouts. Chosen by the Minnesota Wild at the 2002 NHL Draft, Brust made his NHL debut with the Los Angeles Kings on November 30, 2006, appearing in 11 games. With the Binghamton Senators in 2011, he won the Calder Cup as champions of the American Hockey League. The 36-year-old played with Bratislava Slovan in Slovakia during the 2019-20 season. 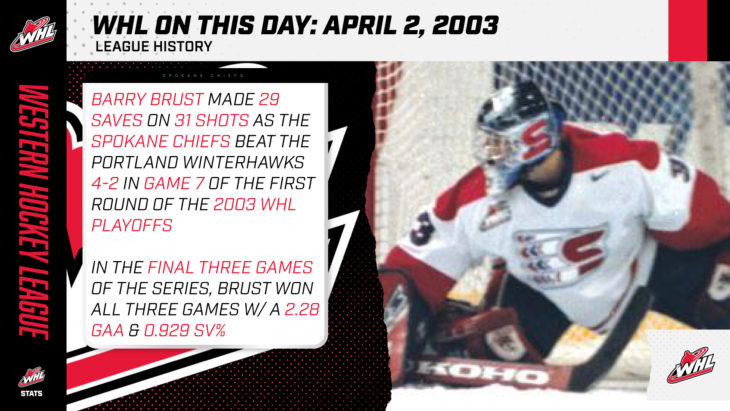 Everyone knows the end result of the 2004 Medicine Hat Tigers, but to get there they had to set the tone early and often in each of their series victories. After dispatching the Swift Current Broncos in the first round, the Tigers opened the second round against the Brandon Wheat Kings with a 5-1 win on home ice on April 2, 2004 and found their way to victory from one of their rookie forwards in Brett Robertson.

After posting a modest 20 points (9G-11A) in his rookie season, Robertson had a single assist in the first round. Looking to contribute more to his team’s success, Robertson scored the game-winning goal and the insurance goal of that 5-1 win to give the Tigers a 1-0 lead in the series. He’d later score the series-winning goal on home ice in Game 5 to push the Tigers into the Eastern Conference Championship.

Robertson also played with the Prince George Cougars and Seattle Thunderbirds during his WHL career, amassing 154 points (62G-92A) in 277 WHL regular season games. He also appeared in 57 WHL playoff games, posting 36 points (17G-19A). Starting in the 2007-08 season, Robertson utilized his WHL Scholarship at St. Francis Xavier University and was named to the All-Rookie team in Atlantic University Sport that same year as well. 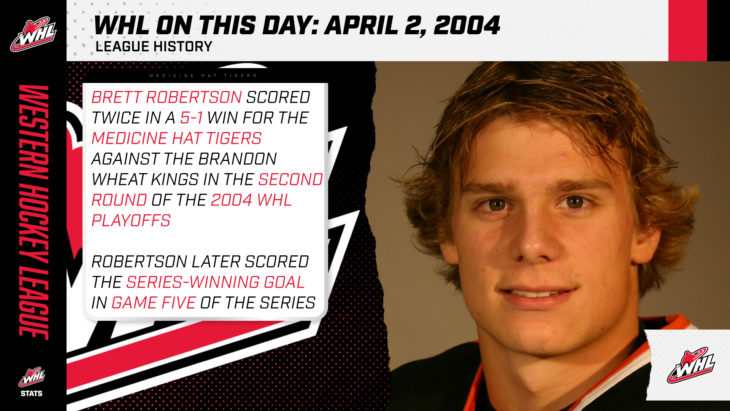 Adding another chapter to their rivalry, the Saskatoon Blades and Prince Albert Raiders met in the first round of the 2011 WHL Playoffs. Though the Blades had finished with the top record in the league, the Raiders gave them all they could handle, keeping the series tied through four games with each team claiming a pair of wins on home ice.

Game 5 was the turning point in the series on April 2, 2011 as the Blades roared to a six-goal second period en route to an 8-0 victory. Powering the Blades in that period was alternate captain Curtis Hamilton, who started the scoring and finished with a pair of goals as part of a four-point effort in that game. The Blades would complete the series victory the following day in Prince Albert to advance to the next round. In 10 games during the 2011 WHL Playoffs, Hamilton had 11 points (4G-7A) to tie for the team lead with Brayden Schenn.

Hamilton would play with the Blades for his whole WHL career, recording 173 points (67G-106A) in 216 WHL regular season games. He also added 16 points (7G-9A) in 22 WHL playoff games. Drafted by the Edmonton Oilers in 2010, Hamilton would make his NHL debut on April 9, 2015 against the San Jose Sharks. During the 2019-20 season, he played with the Belfast Giants of the Elite Ice Hockey League in the United Kingdom. 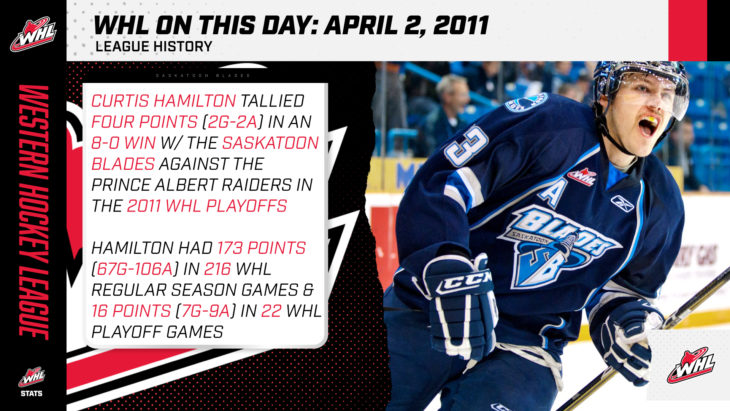 After finishing second in the B.C. Division during the 2014-15 WHL Regular Season, the Victoria Royals took on the Prince George Cougars in the first round of the 2015 WHL Playoffs. Looking to end the series as quickly as possible, the Royals jumped out to a 2-0 lead before losing Game 3 in Prince George by a 4-2 score.

The Royals would rebound in a big way thanks to goaltender Coleman Vollrath on April 2, 2015 as he posted a 24-save shutout in Game 4 for the lone clean sheet of his WHL playoffs career. Vollrath would make 11 saves in the first, four in the second, and nine in the third to give his team a 3-0 win in the game and a 3-1 series lead. They’d close out the series two days later on home ice.

For his WHL career, Vollrath appeared in 165 WHL regular season games, posting an 84-48-4-6 record, 2.73 GAA, 0.910 SV%, and eight shutouts. To date, he still holds the Royals’ regular season record for shutouts in a single season and well as the best career goals-against average with a 2.73 mark. 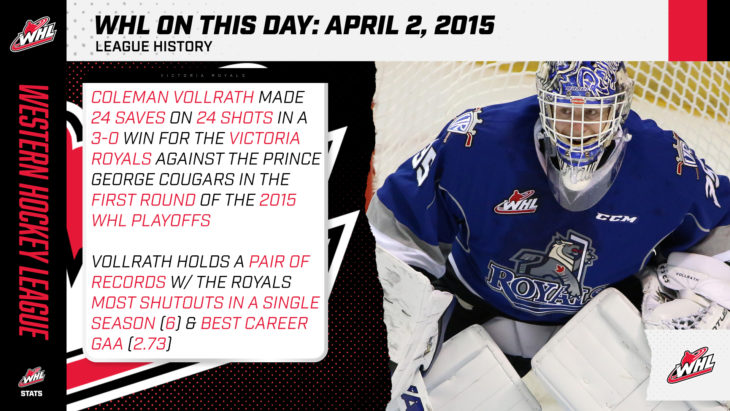