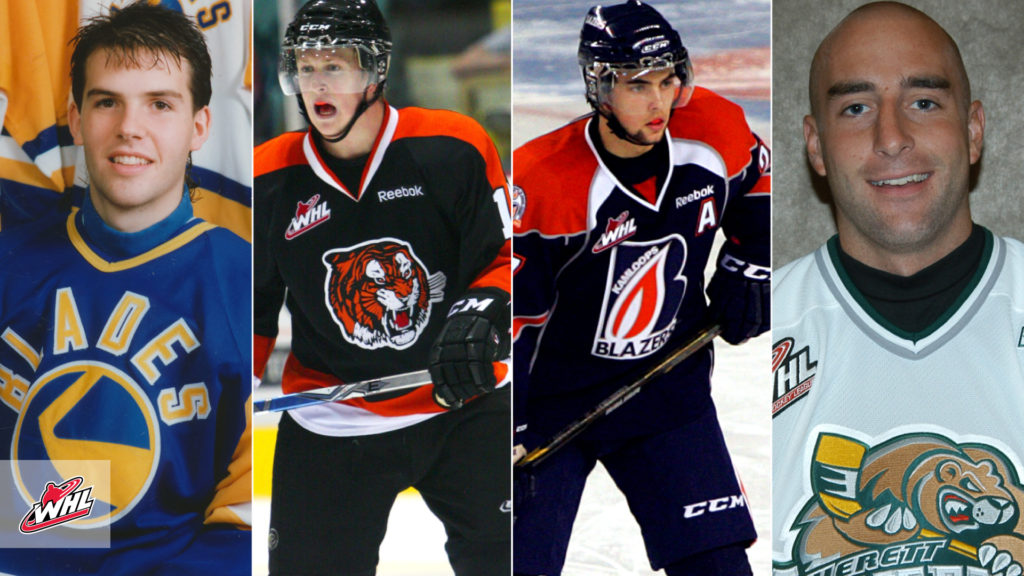 In the 1991-92 WHL Regular Season, the Saskatoon Blades finished third in the Eastern Division. After beating the Lethbridge Hurricanes and Swift Current Broncos, the Blades took on the Prince Albert Raiders in the 1992 Eastern Conference Championship. Serving as the team’s backup to start the series, Trevor Robins bided his time for the right moment to shine for his team. Pressed into action and delivering a win in Game 2, Robins was the backup as the series returned to Saskatoon. With the Blades losing 4-1 on home ice in Game 3, the team turned to Robins in net and he delivered.

On April 16, 1992, Robins made 29 saves on 30 shots in a 2-1 win for the Blades in Game 4. The Brandon, Man. product delivered when the Blades needed it most and that provided a spark for Saskatoon to win three-straight games, closing out the series on home ice in Game 6 a few days later. That performance put the Blades into their first WHL Championship Series since 1976. Robins and the Blades would eventually be defeated in a seven-game series by the Kamloops Blazers, but the moment for Robins stands out as a turning point in the series for his team.

After closing out his WHL career with his hometown Brandon Wheat Kings in 1993, Robins played professionally in North America and Europe until the 2001-02 season. Robins’ son Tristen would follow in his hockey footsteps, but has since become more adept to filling the net with pucks rather than keeping them out. The 18-year-old Robins led the Blades with 73 points (33G-40A) and is ranked 86th among North American skaters for the 2020 NHL Draft. 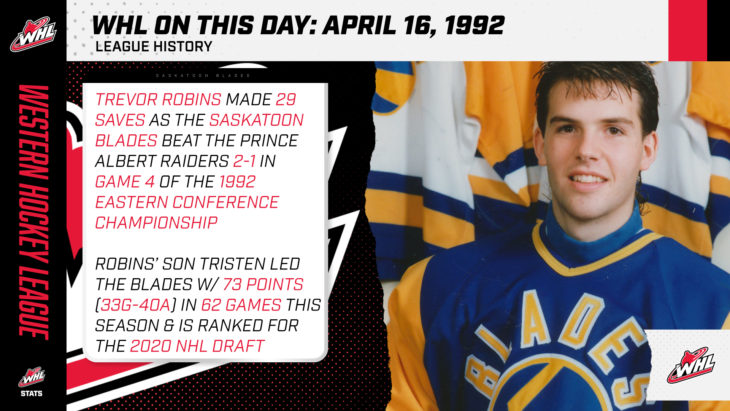 Throughout his time in WHL, Mitch Love has endeared himself to fans of each team he’s played or coached for. That proved true once again in the final two seasons of his WHL playing career as Love patrolled the blue line for the Everett Silvertips in their inaugural season and during the 2004-05 WHL Regular Season. Having topped the Spokane Chiefs and Vancouver Giants through the first two rounds of the 2004 WHL Playoffs, they faced a stiff challenge in the defending WHL Champion Kelowna Rockets.

On April 16, 2004, Love scored the game-winning goal in a 3-2 road win against the Rockets to open the 2004 Western Conference Championship.  The Silvertips had scored to go up 1-0 early, but a pair of goals from the Rockets quickly changed that to a 2-1 lead for the home side after 20 minutes. In the second period, Mark Kress tied up the game 4:02 into the middle period followed by the game-winning goal from Love 2 minutes 50 seconds later. The Silvertips would use that momentum to eventually claim the win in a seven-game series, advancing to the WHL Championship Series.

A product of Quesnel, B.C., Love would play professionally in North America until the 2010-11 season. He stepped behind the bench with the Silvertips the following season and would spend seven seasons with them until he was named the head coach of the Saskatoon Blades for the 2018-19 WHL Regular Season. On November 22, 2019, the Silvertips retired his number ‘2’ jersey before a game between the Silvertips and Blades. Serving as an assistant coach with Hockey Canada at the 2020 IIHF World Junior Championship, Love helped Canada claim a gold medal. 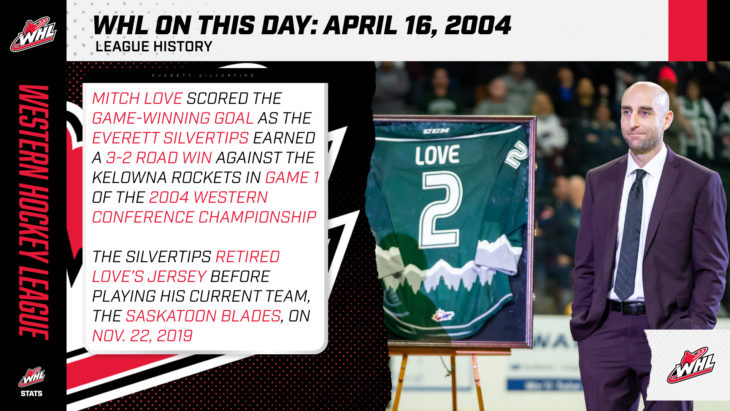 After reaching the 100-point plateau in the 2010-11 WHL Regular Season, the Medicine Hat Tigers were determined to continue that success deep into the 2011 WHL Playoffs. After opening with a six-game series win against the Wheat Kings, the Tigers took on the Central Division champion Red Deer Rebels with the winner advancing to the Eastern Conference Championship. Outscoring the Rebels 17-2 through the first three games of the series, the Rebels struck back with a 1-0 road win in Game 4 to send the series back to Red Deer and were leading 4-1 in the third period of Game 5.

On April 16, 2011, Kellan Tochkin scored 9:32 into the first overtime period as the Tigers erased a three-goal deficit to win the game 5-4 in overtime and capture the series. After the Rebels had scored to go up 4-1 2:21 into the third, the Tigers hatched their comeback plan. Boston Leier scored 23 seconds later, Linden Vey closed the gap to a single goal midway through the period, and Emerson Etem tied up the game with 4:14 left in regulation. That set the stage for Tochkin’s game-winning goal in overtime.

In 24 WHL playoff games, that stands up as Tochkin’s lone game-winning goal among the seven goals he scored between the Silvertips and Tigers. After finishing his WHL career with the Raiders in 2012, Tochkin played professionally in North America and Europe, last playing the ECHL and Sweden during the 2014-15 season. 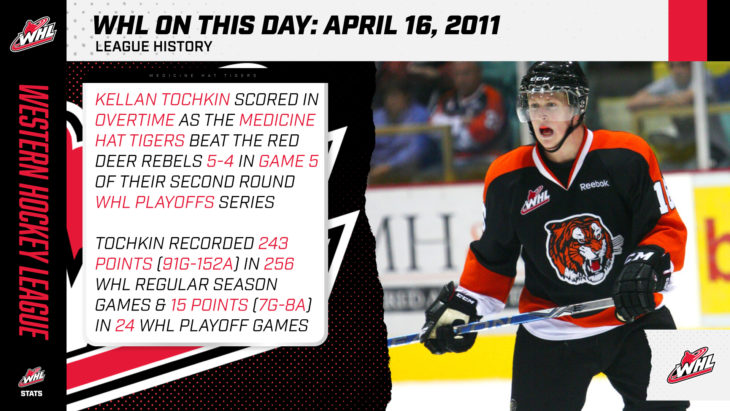 It wouldn’t be a proper edition of WHL On This Day if we didn’t feature an absolutely bonkers game with a lot of goals. The Kamloops Blazers won the B.C. Division during the 2011-12 WHL Regular Season. Scoring 290 goals, the third-most in the league, the Blazers’ offence became a tough force to contend with. After sweeping the Victoria Royals in the first round of the 2012 WHL Playoffs, thanks to a pair of seven-goal outings, the Blazers took on the Portland Winterhawks. The Winterhawks, who had finished second in the U.S. Division, scored a league-leading 328 goals.

On April 16, 2012, Bronson Maschmeyer scored the game-winning goal in a 7-6 regulation win for the Blazers in Game 6 against the Winterhawks in Kamloops. Up 5-2 after 40 minutes and leading 3-2 in the series, the Winterhawks were looking to close out the series on the road, but the host Blazers had other ideas. In the span of 9:26 of game play, Marek Hrbas, Jordan DePape, Aspen Sterzer, and Colin Smith scored to give the Blazers a 6-5 lead before Cam Reid pulled the Winterhawks even. With time ticking down in regulation, Maschmeyer scored his second goal of the game and third point of the night with 21 seconds left in regulation to stun the visiting Winterhawks. Though the Blazers would fall in the ensuing Game 7, the 13-goal contest stood up as the highest-scoring game in that year’s playoffs.

Upon the conclusion of his WHL career in 2012, Maschmeyer utilized his WHL Scholarship and played four seasons in U SPORTS men’s hockey. Maschmeyer has also played professionally in Germany since the 2016-17 season, recently appearing for Heilbronner Falken in the second tier of German ice hockey. 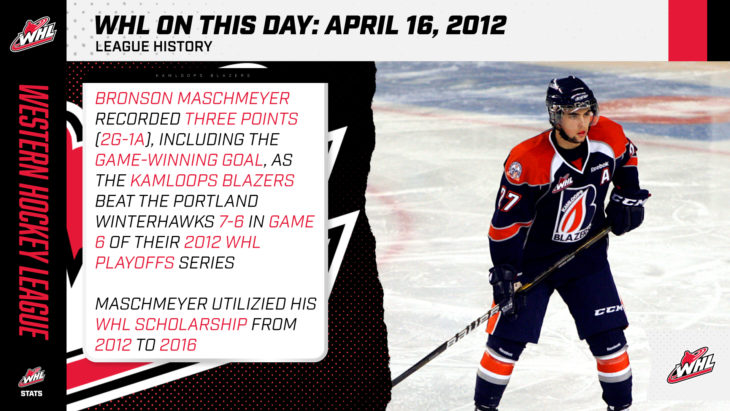