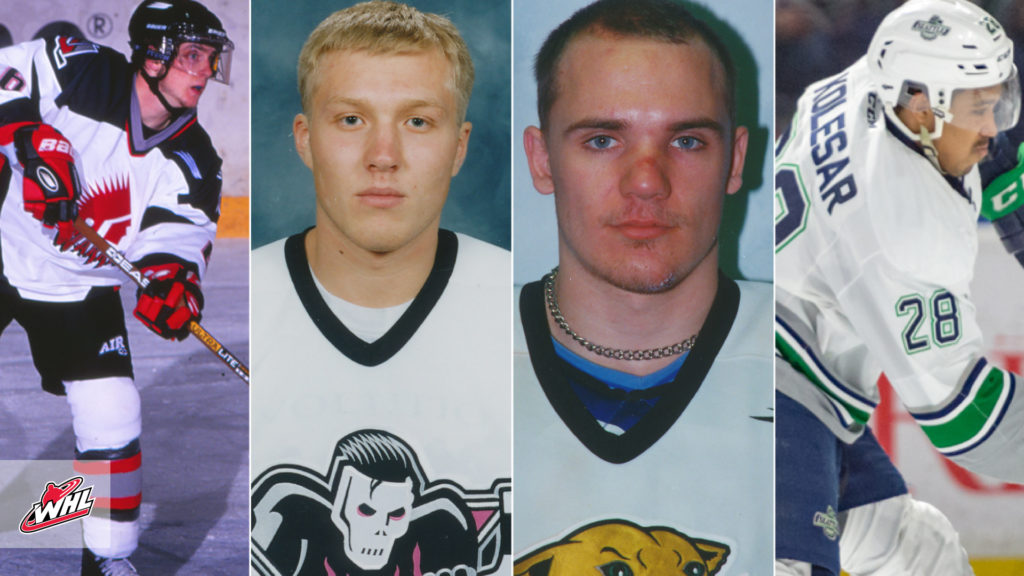 Recording 229 points (121G-108A) in 208 WHL regular season games, Borys Protsenko is among the Calgary Hitmen’s all-time greats. However, through his first two seasons in the league, the WHL Playoffs eluded both Protsenko and the Hitmen. That all changed in his final season as the Hitmen qualified for the WHL Playoffs for the first time in their existence in 1998. After beating the Saskatoon Blades and Swift Current Broncos, the Hitmen’s path went through Manitoba and the Brandon Wheat Kings.

On April 14, 1998, Protsenko scored 15:50 into the first overtime to deliver a 3-2 win for the Hitmen in Game 3 of the Eastern Conference Championship. After dropping the first two games on home ice, the Hitmen needed a spark and went up 2-0 early on goals by Chris Nielsen and Kris Beech in the third game of the series, but the Wheaties would receive goals from Cory Cyrenne and Ryan Robson to tie up the score before Protsenko won it in overtime.

While the Hitmen would end up dropping the series in five games, the win was their first-ever as a Club in the Eastern Conference Championship. For a formidable Wheat Kings squad that ranked third in their division and fourth in the 18-team league, their first loss on home ice in that season’s playoffs came courtesy of Protsenko and the Hitmen. After representing his home country of Ukraine at international tournaments and playing professionally throughout the world, Protsenko has served as an Amateur Scout with the National Hockey League’s Dallas Stars. 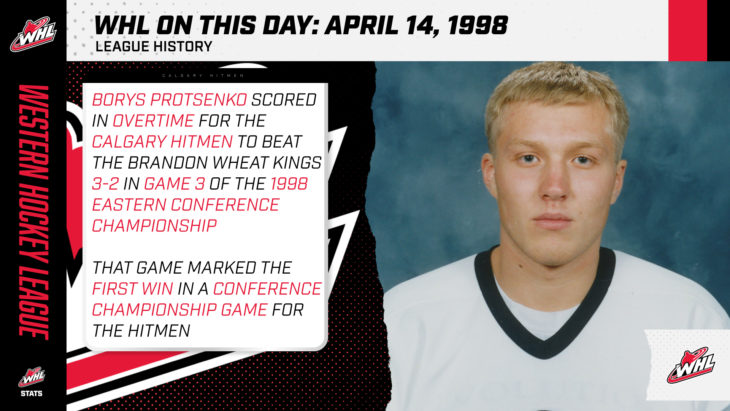 Sensing they were on the verge of something special during the 1999-00 WHL Regular Season, the Prince George Cougars made a trade in the early portion of the season with the Saskatoon Blades, acquiring overage forward Jon Barkman. Barkman would prove to be a smart acquisition for the Cougars as he recorded 45 points (16G-29A) in 51 games, helping power the Cougars to second place in the West Division. With the team holding firm memories of their run to the Western Conference Championship in 1997, eventually falling to the Seattle Thunderbirds, the Cougars faced the T-Birds in the second round of the 2000 WHL Playoffs.

On April 14, 2000, Barkman scored twice as the Cougars rolled to a 7-0 win against the Thunderbirds. Accounting for two of his four goals in the 2000 WHL Playoffs, Barkman scored the third and fourth goals of the game for the Cougars on home ice. The win gave the Cougars a 2-0 lead in the best-of-five series, one they’d close out in Seattle two days later to return to the Western Conference Championship for the second time in four seasons. Though the Cougars would fall to the Spokane Chiefs, the win against the Thunderbirds remains as one of the shining moments from that season’s run.

Upon the conclusion of his WHL career, Barkman briefly explored the professional ranks before utilizing his WHL Scholarship and returning to Saskatoon, Sask. to play with the University of Saskatchewan Huskies. During the 2001-02 Canada West season, Barkman tallied one of the better single-season performances in recent memory as he recorded 61 points (38G-23A) in 33 games. Leading all Canada West scorers, Barkman’s performance earned him the Canada West & U SPORTS Player of the Year Awards as well as the Canada West & U SPORTS Most Sportsmanlike Player of the Year Honours. 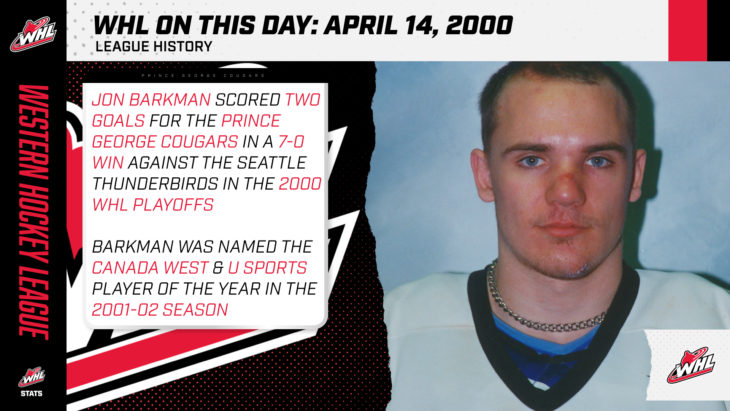 We’ve revisited the 2003 WHL Playoffs in plenty of recent editions of WHL On This Day, but this game may prove to be the wildest of them all. The Moose Jaw Warriors had placed second in the Eastern Division and conquered the Saskatoon Blades in six games during the first round of the WHL Playoffs. That set up a second-round series against the division champion Brandon Wheat Kings and the series lived up to its billing. Each team stole a road game through the first four games to keep them tied at two, but the Wheaties earned a pivotal win in Game 5 at home to put the Warriors on the brink of elimination.

On April 14, 2003, Nathan Paetsch recorded two assists as the Warriors claimed a 7-6 overtime victory at home, extending the series to a seventh game. Following a five-goal first period, giving the Wheat Kings a 3-2 lead, Paetsch recorded both of his assists in the six-goal second period. That frame vaulted the Warriors into a 6-5 lead, with Paetsch assisting on that sixth goal. The Wheat Kings would find the tying goal in the third, but Petr Jelinek scored 9:09 into the first overtime to extend his team’s season. Paetsch finished the 2003 WHL Playoffs with 13 points (3G-10A) in 13 games.

A second-round selection of the Washington Capitals in the 2001 NHL Draft, Paetsch re-entered the draft in June of 2003 and was selected in the seventh round, 202nd overall, by the Buffalo Sabres. After accumulating 212 points (48G-164A) in 258 WHL regular season games, Paetsch began a professional hockey career still going strong to this day. Paetsch has appeared in 167 NHL regular season games with the Buffalo Sabres and Columbus Blue Jackets, recording 42 points (7G-35A). He’s also enjoyed an extensive career in the American Hockey League, recording 259 points (52G-207A) in 651 games. Also appearing in 104 AHL playoff games, Paetsch won the Calder Cup in 2013 and 2017. During the 2019-20 season, Paetsch played with the Rochester Americans. 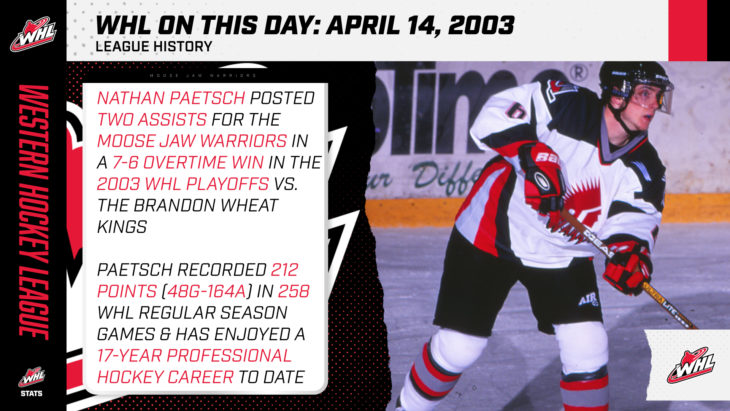 Whether you’re building a championship-contending roster or just trying to get the better of a rival, success often originates from the ability to identify and develop players through the WHL Bantam Draft. In 2012, the Thunderbirds set the plans in motion to accomplish both with a pair of selections in the first round. After using the first-overall choice on British Columbia’s Mathew Barzal, the Thunderbirds looked to Manitoba and called out Keegan Kolesar’s name with the 20th-overall selection.

On April 14, 2017, Kolesar scored a pair of goals and added an assist as the Thunderbirds completed a four-game sweep of the Everett Silvertips in the second round of the 2017 WHL Playoffs. With the sweep, the Thunderbirds got the better of their rivals to the north for a second-straight year. Kolesar scored Seattle’s second and fourth goals in the game, also drawing the primary assist on Barzal’s goal to make it a 3-0 game at one point.

Kolesar finished the 2017 WHL Playoffs with the Ed Chynoweth Cup hoisted high above his head and as the leading scorer with 31 points (12G-19A) in 19 games. Playing primarily with the Chicago Wolves of the AHL since, the Brandon, Man. product made his NHL debut with the Vegas Golden Knights on January 11, 2020. Kolesar has had a chance to play a key role in another team’s playoff run, posting 11 points (6G-5A) in 21 games with the Wolves in their run to the Calder Cup finals. 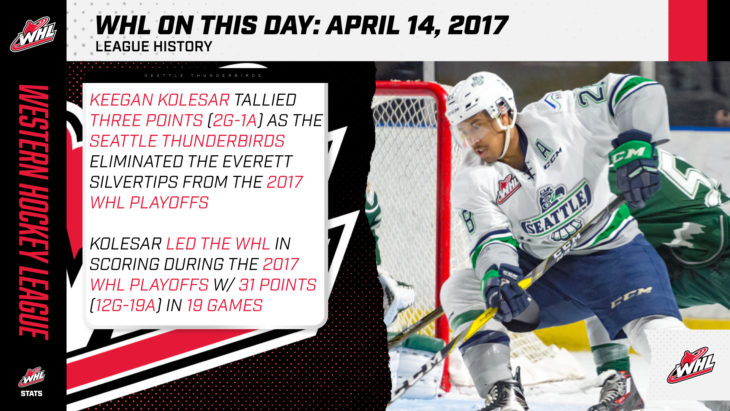