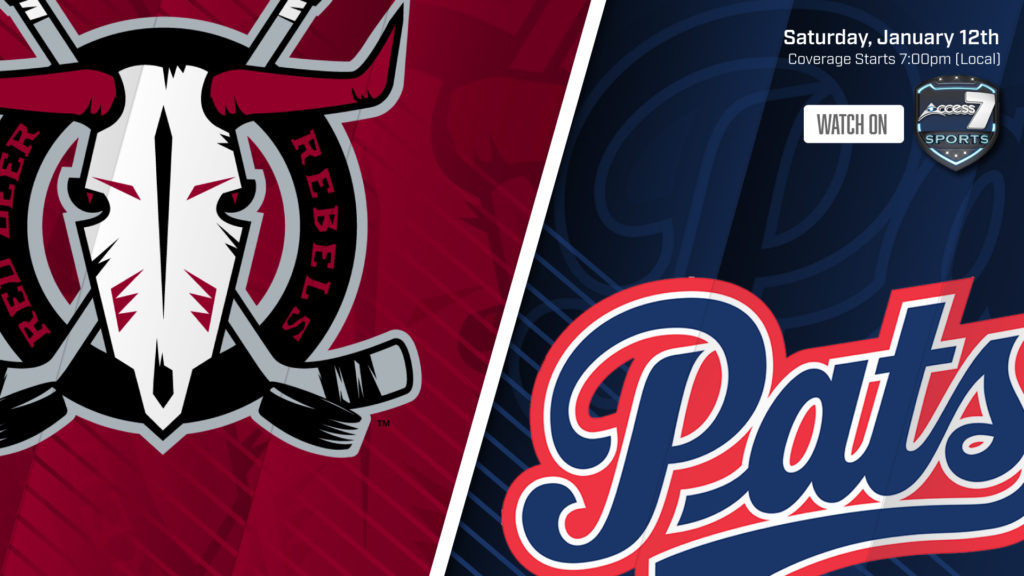 Saturday night hockey in Regina is back and coming to you live in Western Hockey League on Access action!

As part of a four-game road trip, the Red Deer Rebels will wrap up a three-game swing through the East Division looking to reclaim their lead in the Central Division.

Far and away, the Central is providing the best divisional race of the four throughout the league, with the top five teams separated by six points. The good news for teams of Central Division fans is that all five of those teams would make the 2019 WHL Playoffs if they started today.

In the Pats’ corner the WHL Trade Deadline yielded more opportunity for the team’s rebuild as their major move saw Robbie Holmes dealt to the Everett Silvertips in exchange for a pair of draft picks and a strong up-and-coming prospect in Sloan Stanick.

The Pats will be looking to turn a corner and end a 0-5-1-0 stretch after resuming play after the holiday break with a 3-0 record. With 25 games left in their season, the math for the Pats making a run to get into the WHL Playoffs is stacked against them, but they still have plenty of opportunity to separate themselves from the other non-playoff squads and make some noise. A stretch of six home games in their next eight contests will play a large part in that.

Of their remaining 25 games, the Pats will play 14 of them inside the friendly confines of the Brandt Centre. That hasn’t factored much into goal scoring though as the Pats have scored exactly half of their goals at home and on the road.

For those fans in attendance of tonight’s game, the Pats will also be honouring one of their alumni with Barret Jackman Bobblehead night. The veteran of 876 NHL games played four seasons with the Pats, including three of them as captain. The defenceman from Trail, B.C. recorded 139 points (28G-111A) in 234 WHL regular season games.

Be sure to catch all the action live from the Brandt Centre! Puck drop for WHL On Access action between the Rebels and Pats starts at 7 p.m. CT!

Stats to watch:
-The Rebels and Pats have faced each other once this season, with the Rebels taking the 4-3 victory in the shootout. The teams will meet twice in February with a game on each other’s home turf
-The Pats have won four straight games at the Brant Centre against the Rebels. Their last loss to Red Deer in Regina came on February 29, 2016
-Ethan Anders of the Red Deer Rebels and Dustin Wolf of the Everett Silvertips represent two of the six goaltenders in the WHL to surpass 20 wins this season. The pair are also on the radar of NHL Central Scouting ahead of the 2019 NHL Draft
-Chicago Blackhawks prospect Brandon Hagel is 12 points shy of 250 for his WHL career and 18 games shy of 250 for his WHL career. He’s also two assists shy of three-straight 40-plus assist seasons
-Former Pats first-round selection Dawson Barteaux will make his first trip back to Regina since being selected by the Dallas Stars at the 2018 NHL Draft
-With his goal Wednesday, Pats forward Austin Pratt recorded the 100th point of his WHL career.
-A former Rebel, Pratt has also tied a career-high for goals (18), assists (16) and points (34) from his 2016-17 WHL Regular Season with the Rebels
-Defenceman Tyson Feist picked up his first point in a Pats uniform on Wednesday, recording an assist
-Rookies Sergei Alkhimov and Riley Krane have been bright spots for the Pats this season as the rookies sit third and fourth respectively in team scoring

Check out the Regina Pats Game Day Magazine ahead of tonight's match with the Red Deer Rebels! https://t.co/YP7YEWg3hc#JoinTheRegiment pic.twitter.com/WTVwGIyNUa