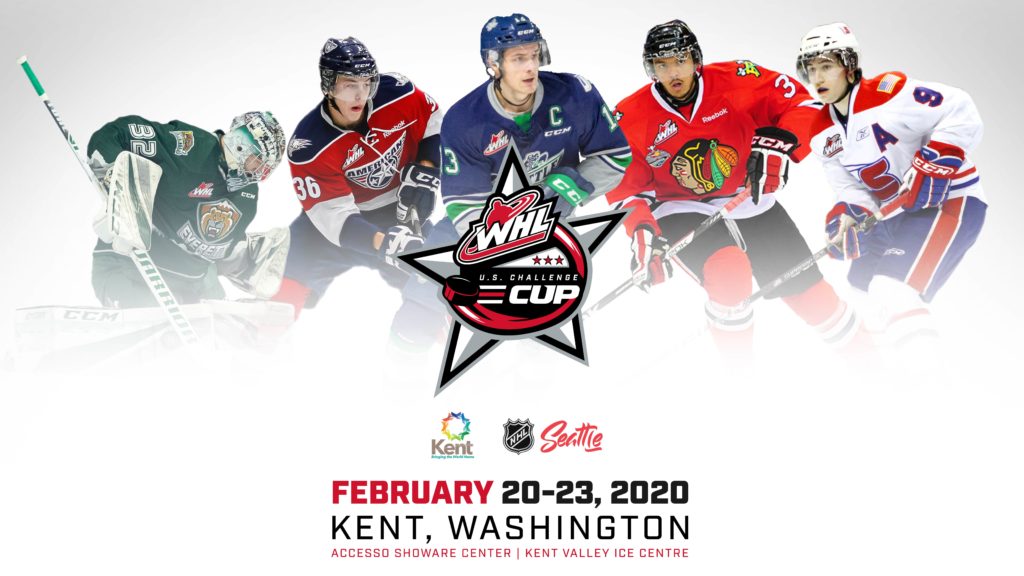 The inaugural WHL U.S. Challenge Cup will feature 12 of the top-ranked Bantam teams from the Western United States and Canada.  The event will be hosted in Kent at the accesso ShoWare Center (home of the WHL’s Seattle Thunderbirds) and Kent Valley Ice Centre, with the primary objective of the tournament being to promote the growth of hockey at the grassroots level in the Pacific Northwest.

With the support of NHL Seattle, Visit Kent, and the Seattle Thunderbirds, the WHL U.S. Challenge Cup will provide a high-calibre event for participants and spectators. The tournament format will feature a 12-team round-robin, with the top four teams advancing to the medal round.

The 2020 WHL U.S. Challenge Cup will present an opportunity to showcase the next generation of American-born stars. Many of the Clubs competing at the 2020 WHL U.S. Challenge Cup have produced many WHL and NHL stars, including the likes of Seth Jones (Dallas Stars Elite / Portland Winterhawks), Scott Gomez (Team Alaska / Tri-City Americans), and Kailer Yamamoto (Los Angeles Jr. Kings / Spokane Chiefs).  The 12 participating Bantam teams will be the guests of the Seattle Thunderbirds when the Kent-based WHL team hosts the Portland Winterhawks for a WHL U.S. Division rivalry game Saturday, February 22.

The WHL also announced today that it will host a WHL U.S. Prospects Draft in March, which will consist of two rounds. Further details will be announced in the New Year.

WHL Commissioner Ron Robison
“The WHL is very excited to partner with NHL Seattle, Visit Kent and the Seattle Thunderbirds on staging the WHL’s first ever U.S. Challenge Cup in Kent. Due to the support our partners are providing, the WHL is in a position to make this inaugural tournament a first class event for all participating teams.”

Tod Leiweke – President & CEO, NHL Seattle
“The U.S. Challenge Cup is a great opportunity for us to work with local hockey groups as we look to grow the sport in the Pacific Northwest. This tournament will showcase a high level of competition and highlight the importance of building community and fostering relationships through the sport of hockey. We are very proud to be able to help present the inaugural U.S. Challenge Cup.”

Mayor Dana Ralph – City of Kent
“We are thrilled the WHL has chosen to host the WHL U.S. Challenge Cup in Kent. As home to accesso ShoWare Center and the Kent Valley Ice Centre, we appreciate the value of youth sports. This is a great opportunity to grow the popularity of hockey in the region and to showcase all that Kent has to offer.”

Bill Boyce – Kent City Council President
“Kent is excited to partner with the WHL and NHL Seattle to bring the inaugural WHL U.S. Challenge Cup to our region. As the home of the Seattle Thunderbirds, it makes perfect sense to host the top-ranked youth players from the U.S. and Canada to play in this high-calibre tournament. We hope this championship will grow awareness and excitement about hockey and look forward to seeing these young players compete – and eventually move on to join the Thunderbirds and Seattle’s NHL team.”