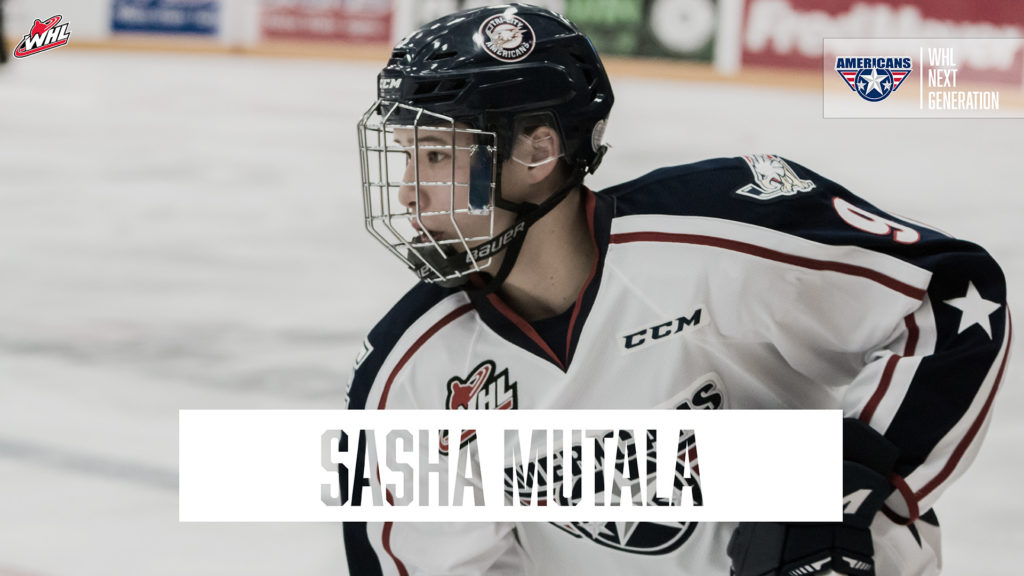 Tri-City Americans prospect Sasha Mutala knows that it’s not easy to make the jump to the Western Hockey League from Midget hockey, but the 16-year-old phenom has been doing a pretty good job of it so far.

The Vancouver, B.C. product’s exceptional performance through his first four pre-season games has put him in prime position to become a key part of a Tri-City lineup that promises to be one of the most dynamic in the league come Opening Night.

“The Americans play a skill game and they also play a hard-working game and I’m both of those things. I believe I fit quite well in the system,” said the Americans’ first round pick, sixth overall at the 2016 WHL Bantam Draft.

Mutala, who defines himself as a playmaking forward who also has some grit to his game, got his first look at WHL hockey in October last season and said that it was not an easy jump to make.

“It was definitely a good experience to get some games in last year. The hockey’s a lot faster, a lot bigger, a lot stronger out there so it’s good to have that confidence in knowing that. I know what to do when I’m out there and it should help me for the season,” Mutala said, adding that he learned of things he could improve about his own game from that experience.

“In midget, I think my skating was okay but when I came to the Western League it was definitely a lot faster and I had a little bit of trouble keeping up, so that’s definitely something I focused on this past summer.”

The 6-foot-0, 187-pound forward was a force to be reckoned with for the Greater Vancouver Canadians of the B.C. Major Midget League last season.

“Knowing you can play against older guys like Midget, they’re a few years older, but the ‘Dub, obviously, guys are much, much older than you,” said Mutala, who as a 13-year-old posted 108 points (53 goals, 55 assists) in 53 games with the Burnaby Winter Club Bantam A1 team.

“It’s good to know you can play against older guys but obviously it’s still a big jump to the Western Hockey League.”

Naturally, the right-shooting sniper spent the majority of his time over the off season trying to make that transition as smooth as possible.

Mutala said he did a lot of weight lifting and power building and also put in some work on his skating and game-situation training during the summer months.

In addition to his own training regimen, Mutala also had the opportunity don the maple leaf at the Hockey Canada U17 Summer Development Camp in Calgary in July.

He said the experience at the week-long tournament was great because it tested him both physically and mentally.

The tournament turned out to be a really good one for Mutala personally as well, as the young gun posted four goals and two assists in just three games with Team Black.

“It’s definitely good for the confidence and I just want to prove that I can play with the best players in Canada,” Mutala said.

And based on the way he’s playing lately, he might just get that chance.

Now that he’s spent some time with the Americans during training camp, Mutala said he’s been enjoying the experience.

“I really think it’s how the management and how the coaching staff really care for the players here. It’s really a family business run around here and everyone’s super close,” he said of his time in Atomic Town so far.

While Mutala has been impressive so far, he noted that he’s always looking for ways to improve his game.

“Focusing on the little details that the older guys do. Learning from the older guys, seeing what kinds of things they do on the ice that makes their game better than mine and try to implement my game.”

Mutala and the Americans kick off the 2017-18 WHL Regular Season on Sept. 23 against the Seattle Thunderbirds at the ShoWare Center.

They make their first appearance at the Toyota Center on Sept. 30 when they play host to the Everett Silvertips. Puck drop on that game is at 7:05 p.m. PDT.