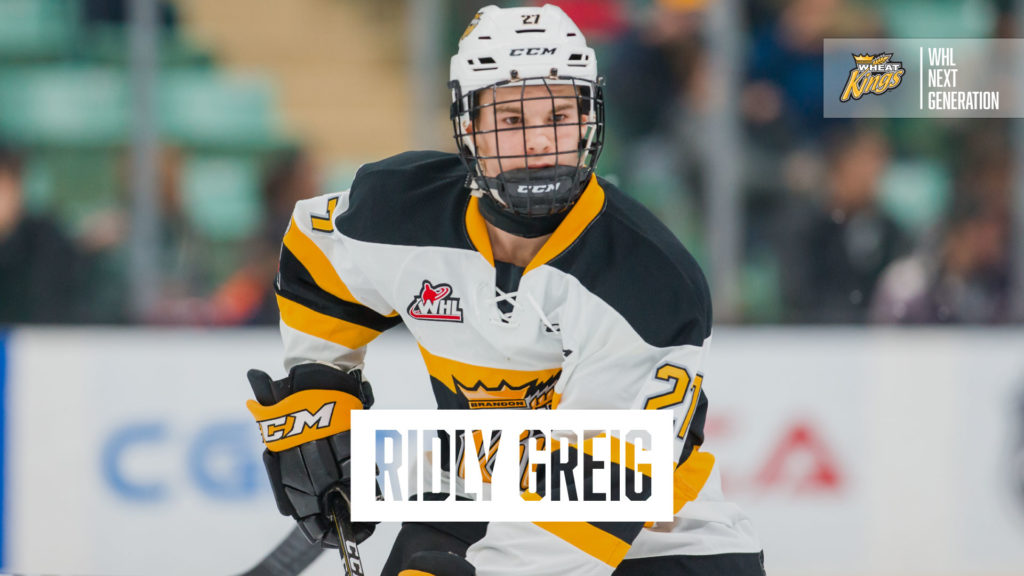 The Brandon Wheat Kings have set themselves up nicely for the future, acquiring Luka Burzan, Chase Hartje, Jonathon Lambos and Ty Thorpe, along with four first-round picks and a second-round pick all at last season’s trade deadline. They are also hoping that their first-round pick in 2017 will be a face the franchise remembers for a long time.

Ridly Greig was selected eighth-overall by the Wheat Kings at last summer’s WHL Bantam Draft after posting 71 points (22G-49A) in 35 games in his Bantam season with the Lethbridge Bantam AAA Hurricanes. After winning an Alberta Major Bantam AAA Hockey League Championship in the 2015-16 season, Greig led the AMBHL in assists and won the Alberta Cup during the 2016-17 season. His past success followed him into his Midget season during the 2017-18, where he posted 54 points (24G-30A) in 32 games, helping the Hurricanes capture the Alberta Midget AAA Hockey League Championship.

“I thought it was awesome,” said Greig. “We had a really good team and good group of guys. We got to go to the Telus Cup which was lots of fun.”

The 5-foot-9, 145-pound forward added 21 points (5G-16A) in 12 games during the playoffs, securing his third league championship in three years, this time in the Alberta Midget Hockey League.

“I guess I just got rolling, my whole team did really,” said Greig. “We got in a groove and used it to win the title.”

“It was awesome [winning the championship], winning with my teammates who are all really great guys, it was special, different from the years before.”

By winning their league the Lethbridge Midget AAA Hurricanes got to compete in the 2018 Telus Cup, where they beat the Toronto Young Nationals 4-0 in the Bronze Medal game.

“With a short-term competition, you have to make sure you are playing good as one bad play can cost you the tournament; so, it’s very different from league play,” said Greig. “To find success there after winning the league was great.

“We lost the semi-final game in overtime which was disappointing, but we rallied and came away with [the] bronze [medal], which was great.”

In addition to playing in the Telus Cup, the Lethbridge, Alta. product also got the opportunity to play in the WHL Cup, earning a silver medal in an overtime loss in the championship final.

“Playing with and against good players like that in a tournament is always a good opportunity, its also a lot of fun because you’ve never seen a lot of these players before because you are in different leagues so it’s a bit of a learning opportunity as well.”

Consistently finding success, the former-first round pick was given the opportunity to play with the Wheat Kings.

“I was really nervous,” Greig said on entering his first game. “I was focusing really hard to show what I could do and [my teammates] were there for me and I thought I played well. It was a lot of fun suiting up in yellow and playing in front of a big crowd. It’s definitely something that will stick with me.”

While Greig only suited up for four games, he did notch an assist and recognized how hard it is to play in the WHL as a 15-year-old.

“The guys are definitely a lot bigger and faster. Even without the small battles the pace is a lot quicker, you need to have your head up more as you don’t have the time and space you do in Midget.”

As for recording his first point in the WHL, Greig hopes there is more to come, but the first point will always be special.

“I shot the puck and I think it went off Reinhardt’s hand, I didn’t really know what to think. It definitely wasn’t a highlight-reel pass or goal, it just kind of went in. But when your playing at a higher level you don’t really care how [the puck] gets in the net you just hope it does.”

It was a special moment for Greig, who got to share it with some of the people he credits with helping him get to this higher level. In attendance to watch him record his first point was his mother, uncle and aunt along with more extended family.

While he got a taste of the WHL last year, Greig hoped his first full season will result in earning a full-time roster spot.

“I’m training five times a week, hitting the ice a few times and attending a lot of camps,” said Greig on his summer so far. “I’m training really hard to make sure my body is ready for the longer season.”

The Wheat Kings are hoping that Grieg turns into the next big name in a franchise that has seen the likes of Nolan Patrick, Ivan Provarov and Winnipeg Jets General Manager Kevin Cheveldayoff.

Greig and the Wheat Kings will kick off their 2018 pre-season on Friday September 7th at 7:30 p.m. CST, when they host the Regina Pats at Westoba Place, Brandon.

If you could have any super power what would it be?

What fad/trend do you wish would come back?

Who is your favorite athlete outside of hockey?

What song could you sing solely from memory?