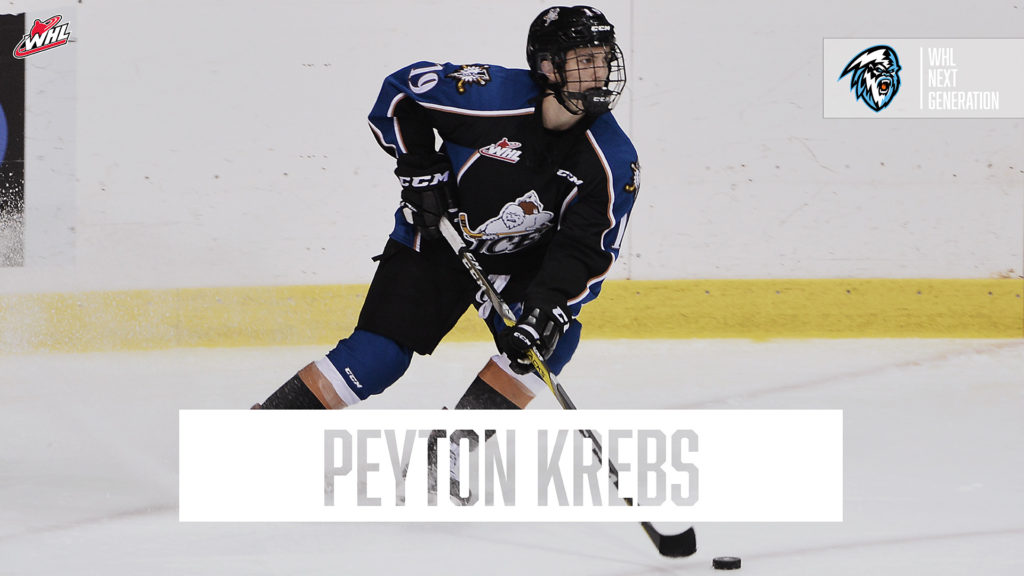 WHL Next Generation is a 22-part series highlighting a handful of the future stars of the Western Hockey League. From first-round bantam draft picks to later-blooming selections, get to know the names of players set to establish themselves as the newest crop of exciting talent to grace the WHL.

There’s been an air of excitement surrounding the city of Cranbrook the past few months.

The Kootenay ICE have a new logo, new jerseys, new coaches and new ownership this season and they could have a new star player on their hands as well thanks to the addition of 16-year-old dynamo Peyton Krebs.

“I think there’s a new atmosphere around Cranbrook and the new ownership, the new coaching staff is pretty special,” said Krebs, who was the first overall pick at the 2016 WHL Bantam Draft.

After putting up five points (one goal, four assists) in five regular season games with the ICE last season, Krebs is looking to become the cornerstone of a franchise that has struggled the last few seasons.

“Personally, I want to put up some numbers for sure. I want to be a top guy they’re looking for whether we’re down a goal or up a goal,” Krebs said.

And the 5-foot-11, 162-pound rookie has already started making strides towards that goal.

The Okotoks product is coming off a great season with the Foothills CFR Bisons that saw him post 40 points (15 goals, 25 assists) in 29 games, good enough to tie for first in the league scoring race and earn a nod as the AMHL Offensive Player of the Year.

On top of that, he’s already registered his first regular season WHL goal and assist, having put up a four-point night for the ICE in January last season.

“I got my first goal and my first assist, so I got that out of the way and now I can just carry on and play hard this year and I don’t have to worry about doing that,” Krebs said, adding that getting experience at the WHL level as a 15-year-old was extremely valuable.

Not only did Krebs get the chance to play games with the ICE last season, he also had the opportunity to square off against his brother Dakota, who plays defense for the Tri-City Americans.

“Any time you can play against your brother, for me it was my first time in my whole career and getting to do it in the WHL was even cooler,” recalled Peyton, adding that there’s definitely some sibling rivalry in the Krebs household when it comes to whose team is better.

“At home, I’m putting Kootenay ICE stickers over his Tri-City Americans stuff and doing little things like that just to get the edge.”

More recently, Krebs logged two goals and an assist in five pre-season games with the ICE earlier this month.

But personal accolades aren’t the only thing on his mind as he gears up for the ICE’s season opener later this week.

“Team-wise, obviously, we want to win. Cranbrook hasn’t been winning these past few years and we want to bring that winning mentality back,” he said.

In order to effectively help his team do that, the former Alberta Major Bantam Hockey League MVP has been working on bulking up and working on his skating so he can be a more physical presence on the ice.

“I think the biggest thing is just getting strong. There’s 20-year-olds, 18-year-olds and 19-year-olds that are older and you just need to be strong,” he said.

“I think what (ICE Head Coach) James (Patrick) wants is a fast team that will put other teams on their toes and anything that I can provide, whether it’s speed or hockey IQ, will give an edge to the Kootenay ICE this season.”

Krebs and the ICE open the 2017-18 season on Sept. 22 when they host the Calgary Hitmen at Western Financial Place. Puck drop on that game is at 7 p.m. MDT.