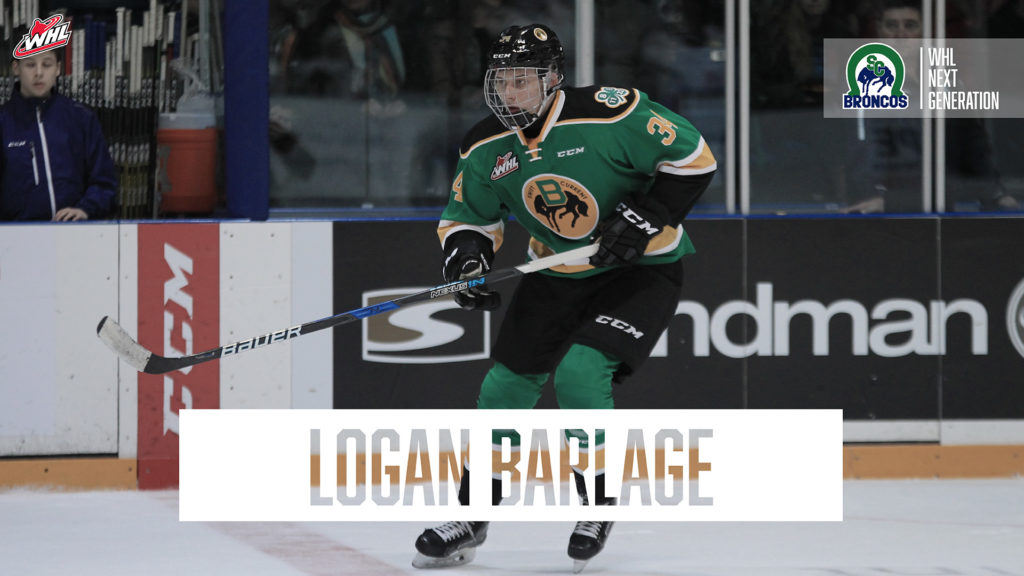 Logan Barlage has already started to live up to the hype that surrounded him in his WHL Bantam Draft-eligible season.

The highly-touted prospect, who once notched 274 points in a single Pee Wee AA season introduced himself to the Western Hockey League in a big way, last week.

The Swift Current Broncos prospect kicked off the 2017 WHL Pre-Season with a four-point night, and Barlage said he has no plans of slowing down.

“It was a fun game, that’s for sure,” Barlage said. “It all went well that game and everything was going the way I wanted it to.”

Drafted by the Broncos in the first round, fourth overall at the 2016 WHL Bantam Draft, the Humboldt, Sask. product has always been the kind of player who has the ability to make an impact, regardless of the level he plays at.

Last season, the smooth-skating centre notched 76 points (37 goals, 39 assists) in 44 games as a 15-year-old with the Prince Albert Mintos of the Saskatchewan Midget AAA Hockey League, putting him second in league scoring.

Not bad at all for a rookie.

“I guess that comes along with hard work and teammates and just hard work and determination, you get a couple goals and it helps you out that way,” he said, adding that it was a good season for his team as a whole as well.

“It was a really exciting year in PA and I had a ton of fun and I developed lots as a player.”

And even though Barlage didn’t make any contributions on the score sheet after his first four WHL games with the Broncos last season, his play on the ice was more than enough to impress the Swift Current coaching staff.

“It was a 9 out of 10,” Broncos Assistant Coach Ryan Smith told Golden West Radio in a post-game interview. “He did everything we wanted him to do. He’s going to be a heck of a player in this league.”

Barlage, who ended up playing four regular season games and 13 playoff games with the Broncos last season, said he was just out there trying to do his job.

“I just went in there and didn’t really know what to expect and it just went awesome and I was really excited after that (first) game,” he said.

For Barlage, the best part about joining the Broncos for a few games last year was the chance to experience life as a WHL player first hand, especially during playoffs.
“Every game was so exciting and the fans were amazing. I just took it as a really good experience and I realized how hard I have to work in the offseason to become a better skater and get ready for the next level.”

Now, as Barlage and the Broncos ramp up to the 2017-18 season, the big, 6’4, 201-pound rookie said he’ll be doing everything he can to help the Broncos build on the winning culture they established during last year’s dramatic run to the WHL Eastern Conference semifinal.

“I’m really excited to see the guys again and the coaches and just back into the winning culture that we have now built. It’s an exciting year.”

To that end, Barlage is expecting himself to step up in a big way by the time opening night rolls around.

The self-described complete centre said his goal is to become the best player that he can be.

“(I want to) do whatever I can to help the team win and get a Memorial Cup.”

Barlage and the Broncos kick off the 2017-18 Regular Season with a four-game road trip beginning on Sept. 22 in Saskatoon.

They make their return to the Credit Union I-Plex on Oct. 7 when they play host to the Kootenay ICE. Puck drop on that game is at 7 p.m. MDT.