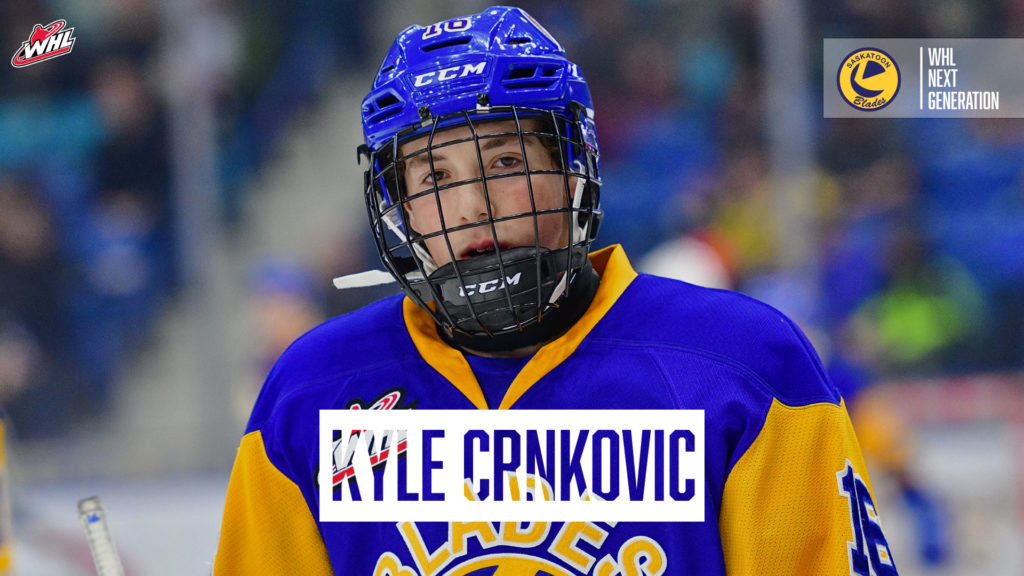 The Saskatoon Blades are loaded with young talent across their lineup. With names like Kirby Dach, Eric Florchuk, Chase Wouters and Nolan Maier, there is another couple of names fans will have to add to their vocabulary. As we saw earlier this month, Aidan De La Gorgendiere is a promising blue liner for the Blades club. Joining him is a gifted player looking to establish himself in Kyle Crnkovic from Chestermere, Alta.

Crnkovic has been lighting the lamp since his Bantam season with the Rocky Mountain Bantam AAA Raiders of the Alberta Major Bantam Hockey League. The 2015-16 season saw the Blades prospect score 71 points (36G-35A) in 35 games.

His production increased heading into his Bantam draft year in 2016-17 as he recorded 79 points (40G-39A) in 30 games for the Pursuit of Excellence Bantam Prep in the Canadian Sport School Bantam Hockey League. He added 17 points (8G-9A) in just five playoff games, guiding his team to a CSSBHL Championship. The small winger also helped guide Team South at the Alberta Cup, adding Alberta Cup Champion to his already impressive resume.

For #ThrowbackThursday, we take a look back at the 2017 CSSHL Bantam Prep Championship Game.

It is impossible to look past the success Crnkovic has found, which is why the Saskatoon Blades drafted him 10th overall in the 2017 WHL Bantam Draft.

“I didn’t really know when I was going to be drafted but I am happy that it was with the Saskatoon Blades and that I could get into their organization and learn from them and work on improving my game without the draft on mind,” said Crnkovic. “When the Blades selected me it was an amazing feeling and I am really happy to be with their organization.”

Crnkovic proved the Blades made the right decision drafting him and had another success campaign in the 2017-18 season. Playing is the Canadian Sport School Hockey League with the Northern Alberta X-Treme Prep, Crnkovic tallied 64 points (36G-28A) in 30 games.

“Last season went really well,” stated Crnkovic. “I got to live with Luke Prokop and his family and they were amazing. The coaching staff was amazing, and we had a good group of guys. I went there to develop as a hockey player and it really helped me develop on and off the ice.”

“I think the excitement helps me elevate my game,” explained Crnkovic on his playoff success. “I played with a great group of guys in both years and we all really elevated our game as a team. It was very easy to succeed playing with those guys.”

Crnkovic credits his teammates for his two championship seasons, but if the WHL Cup was any indicator, Crnkovic is the catalyst. During the five-game tournament the Blades prospect led all players in scoring with 12 points (3G-9A).

That was a real fun event,” said Crnkovic. “It was an honour to represent my province. Our team came together really fast and we had a good tournament. We lost the gold medal game in overtime, but I made a lot of friends and it was an awesome experience.”

With his impressive season, Crnkovic suited up for three game with the Blades as a fifteen-year-old. While he didn’t register a point, Crnkovic was grateful for the opportunity and is excited to play with the young talented core in Saskatoon.

“It was cool to see the schedule they go through on a game day,” said Crnkovic. “It’s a lot different from Midget and seeing the level you have to play at and the preparation that goes into it. The experience was great to take into the summer and know what I needed to do before training camp this year.”

“If I get the opportunity to play with guys like Dach or Florchuk it would be amazing. The guys on the team are great and were really welcoming. I think we are going to be a really good team and I am excited to be a part of it.”

With training camp in the past and the preseason underway, Crnkovic is excited to show the work he’s put in over the summer and hopes it will land him a full-time roster spot at the start of the season.

“I have been skating four to five times a week and have been working out every day as well,” stated Crnkovic. “I also went to the U17 Team Canada camp which was really fun and a good measuring point. I am excited about my progress and can’t wait to get into the season.”

Though summer has been busy for Crnkovic, he has been finding times for other activities that he enjoys and preparing a little more for the season while helping some others work on their game.

“I have been working a little bit,” said Crnkovic. “It’s also hockey though, I have been shooting on some goalies which is fun, and I was working power skating. Outside of hockey I like to play basketball with my brother and go camping with my family.”

As the Blades preseason is already underway, the focus for Crnkovic will be prepping for the start of the regular season, which opens on Friday, September 21, 2018 when they face off against the 2017-18 WHL Champion Swift Current Broncos at the Credit Union I-Plex in Swift Current, Sask.

What is your favorite movie?

If you could have any super power, what would you chose?

Who is your favorite athlete outside of hockey?

What fad or trend do you hope makes a comeback?