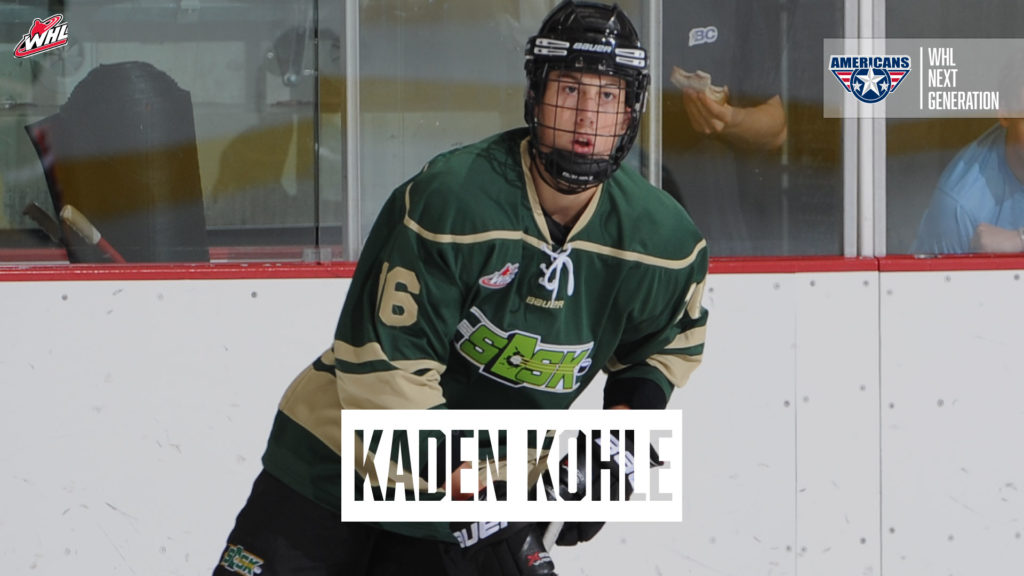 After sweeping both opponents in the first two rounds of the 2018 WHL Playoffs, the Tri-City Americans saw their season come to an end in the Western Conference Championship. A deep playoff run brings excitement around the team, but also marks the departure of some key players, opening roster spots for rookies. One of these openings could be available for former first-round draft selection Kaden Kohle.

Khole was selected 12th overall in the 2017 WHL Bantam Draft after putting up 66 points (38G-28A) in 29 games with the Humboldt Bantam AA Broncos of the Saskatchewan Bantam AA Hockey League.

Being from Cudworth, Sask., Kohle has had a different experience from most in his Bantam and Midget seasons. His Bantam years were played (in?) Humboldt, a 50-minute drive from his home town. Most of his minor hockey was played in Humboldt as well, as Cudworth has a population of less than 800 people. But the commute to follow his dream was no issue for Kohle.

“Cudworth just got an artificial ice surface this year, so that was really exciting for hockey players here,” explained Kohle. “We have initiation to peewee in Cudworth, but if you want to play any further than that you have to find a team. The commute is not an issue when I get to do what I love everyday.”

While Cudworth is not a large town, hockey runs through the veins of its citizens. There were three players from Cudworth to make it to the NHL, the most recent being Paul Shmyr, who last played for the Hartford Whalers two decades before Kohle was born. The most popular in Kohle’s opinion is Orland Kurtenbach.

“Cudworth may not be big, but the first captain of the Vancouver Canucks was from here, Orland Kurtenbach,” said Khole. “It’s a fun fact and cool to see that players from small places like this can be successful at higher levels.”

Kohle will travel a long way to pursue his dreams, as the Tri-Cities are over 1,500 km away. While Kohle is no stranger to a long commute, it will be a completely different experience for him, one that he is excited to embrace.

“I am excited to get to play hockey everyday and having it become part of my daily schedule,” stated Kohle. “Moving to a large city will also be really cool and meeting all the guys there will be awesome. It will be a little intimidating to start because I don’t know anyone there and won’t get to see all my friends from Saskatchewan that often, but I think it will be a really good experience.”

With a lot on Kohle’s mind, he still found time for another successful season in 2017-18, tallying 26 points (12G-14A) in 43 games with the Tisdale Trojans of the Saskatchewan Midget AAA Hockey League. He also continued to play his physical style, but against bigger players, reducing his penalty minutes from 106 in Bantam to 34 in Midget.

“Last season was really fun, and it was a confidence booster to lead my team,” said the Americans Prospect. “In Bantam I was bigger than everyone and got penalized a lot for my physical play, but in Midget against the bigger players it balanced out and I was able to play physical without taking as many penalties.”

His play also saw him selected to play for Team Saskatchewan at the WHL Cup, where he recorded a goal and an assist in five games.

“It was a really fun tournament,” stated the Cudworth product. “I have never played against any of those guys before, so it was good for me to measure myself against those skilled players and to see what I need to work on to elevate my game. I hope to be playing against a lot of those guys this year so it was good to get to play against them so I know what to expect.”

It was experiences like this that helped Kohle determine what he needed to work on this summer to prepare for potentially stepping into the league this season.

“I have been training off ice five times a week and was training on ice at least twice a week,” said Kohle. “At the start of August, I started skating three to four times a week to get my legs going for training camp.”

With the busy summer and the possibility of living over 1,500 km away from home, Kohle spent some time traveling with his family and has made time to hang out with friends that he might not see again until next summer.

“We went to go visit my grandpa in Ontario and it was kind of like a family reunion there,” said Kohle. “I have also been spending some time at the lake and with some friends as I may not get to see them for a while.”

Kohle will get the opportunity to showcase why the Americans drafted him when they open their pre-season against the Everett Silvertips on Friday August 31, 2018, at 7:00 p.m. PDT at the Angel of the Winds Arena in Everett Wash.

Strongest man in the world

What is a hobby of yours not many people know about?

Is there a song you could sing solely from your memory?

Total Eclipse of the Heart by Bonnie Tyler

What fad or trend do you hope makes a comeback?