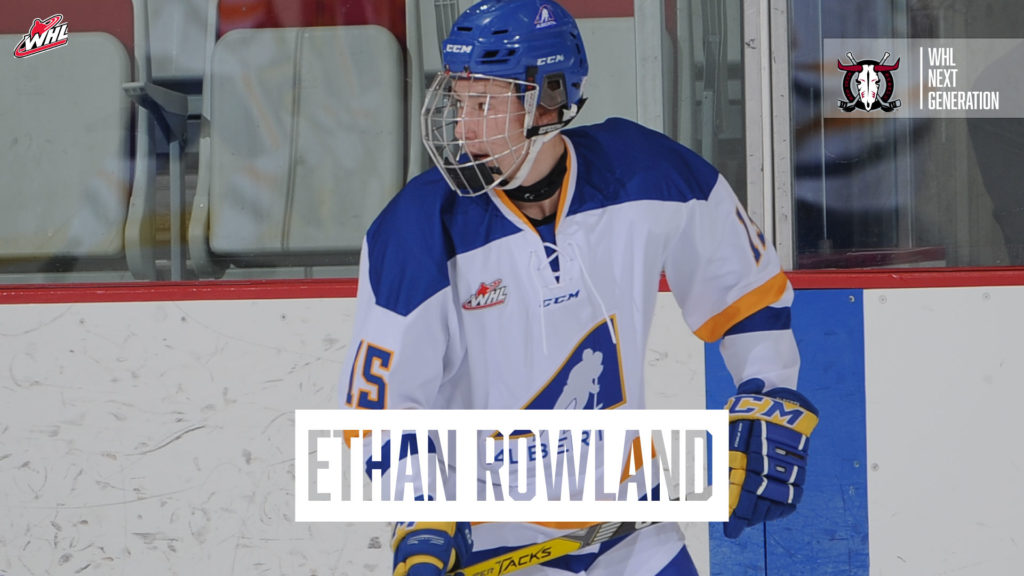 Another successful season saw the Red Deer Rebels earn a berth in the 2018 WHL Playoffs, marking the fourth time they have appeared in the playoffs in as many years. As they gear up for the 2018-19 season, they will look to their first-round selection in the 2017 WHL Bantam Draft, Ethan Rowland, to make an impact.

“Last season didn’t go exactly how I wanted it to,” said Rowland. “We had a lot of older forwards, so I didn’t get a lot of ice time. On top of that, I was injured twice so I missed significant time there as well. The season was filled with adversity for me, but it was good to experience that because I have always had an easy path. Now realizing that not everything will happen perfectly and to expect some challenges will help me going forward and I know how to handle that now.”

While his last season saw some hardships, Rowland made the most of his opportunities, competing for Team Alberta at the WHL Cup, posting a goal and an assist in four games and winning a silver medal with the team.

“The entire experience was great,” said Rowland. “From the Alberta Cup to the Top 80 to the [WHL Cup], it was all a lot of fun. I got to meet so many great guys and play with some really good hockey players. It was definitely an experience I will remember.”

Big thanks to teammates,coaches,trainers and all staff of @TeamABHockey for a great experience and fun week. Honoured to represent Alberta.

In addition to the WHL Cup, Rowland suited up with the Rebels as a 15-year-old playing three games with the club that drafted him.

“It was a dream come true,” stated the Rebels prospect. “Being able to play in my hometown against the Hitmen and to be in a room with the guys who have been in the league for four years and guys like Brandon Hagel, Alexander Alexyev, who are going to do well at higher levels. Being in a room with those guys and on the ice with them was a dream come true. I took in as much as I could and hope one day that guys coming into the league will look up to me in the same way.”

Suiting up with a WHL team for the first time is a dream, but also increases a players nerves. With the first game in Medicine Hat, the second was in Calgary at the Scotiabank Saddledome in front of over 8,000 fans.

“I didn’t really know what to expect,” said Rowland. “I was nervous but also really excited. My first game I played with two older players who helped me out a lot with positioning and adjusting to the speed. My second game was in Calgary as well so I had a lot of friends and family come watch. It was really special.”

Rebels on the road this evening, they are in Medicine Hat. The broadcast on @1067TheDrive begins at 7:20PM. #RDR pic.twitter.com/g8suhY9QLt

One thing that may have helped calm the nerves of Rowland is his intermission ritual. Unfortunately, he was only notified once he was at the rink that he would be playing, so picking up his intermission snack was not an option.

“I usually eat the same meal before heading to the rink,” said Rowland. “In the intermission I always have blueberries or grapes, it was what I had in Bantam and Midget and it’s become routine.”

“I didn’t bring any blueberries with me because I didn’t know I was playing. I was unloading some stuff from the bus into the dressing room and [head coach] Brent Sutter told me I was in and it caught me off guard. I was excited to get into my first game but I definitely wasn’t expecting it so I didn’t have time to get my snack.”

With training camp underway, Rowland will be sure to bring some blueberries or grapes with him. Other than his routines, Rowland has been working hard over the summer to prepare for stepping into the lineup with the Rebels.

“I was training four times a week and threw in at least one day of yoga to work on my balance and flexibility,” said the Rebels prospect. “I have been on the ice with a program three times a week as well through the summer to work on my speed and agility.”

Big thanks to @bold_athlete for a great summer. #LetsGetAfterIt #buzz

With the possibility of a roster spot for Rowland this season, he is excited to showcase his strengths, and looks forward to learning from his teammates and coaches to improve all aspects of his game.

“My speed is definitely a big part of my game,” stated Rowland. “My ability to play multiple positions also favours me as I can step in where needed.”

While the summer brought a lot of hard work, Rowland also found time to enjoy it. He attended the Calgary Stampede with some friends and found time for doing what he enjoys.

“I have been hanging out with friends a lot,” said Rowland. “I went to our cabin a few times and have been playing street hockey. Riding [my] bike has been a big part of my summer as well.”

Rebels’ first pick in bantam draft plays at top speed and with a competitive edge. Story by @GregMeachem https://t.co/DQoN4G9Dax pic.twitter.com/YjQFPnCAWD

As training camp is coming to an end, Rowland and the Rebels will kick-off their pre-season when they host the Edmonton Oil Kings on Friday August 31st at 7:00 p.m. MDT. Fans can catch the action at the Enmax Centrium in Red Deer, Alta.