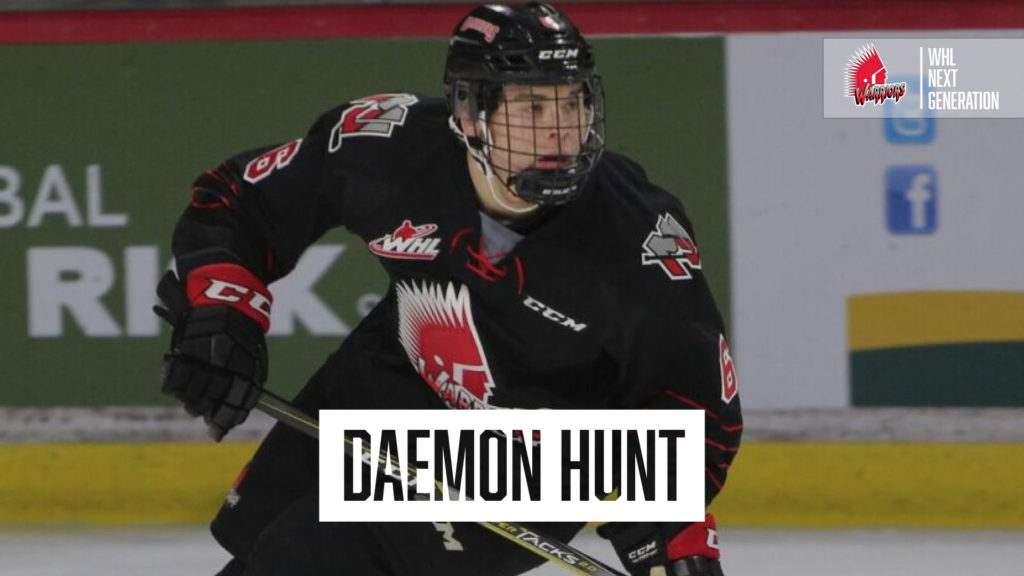 The Moose Jaw Warriors won the Scotty Munro Memorial Trophy as WHL regular season champs for the first time in franchise history last season. They accomplished this by utilizing the many outstanding performances by their players of all ages including an underage player in Daemon Hunt.

“The season went really well,” said Hunt. “Our team was really strong, and we had a great coaching staff. We made it to the finals where we got knocked out against Winnipeg, but it was a really good series with really good hockey. It’s unfortunate we couldn’t move on and try to get to the Telus Cup, which was our goal from the start of the season.”

“As an individual, I think my season went well, not only in Midget but getting the call and getting to play in Moose Jaw was a really good experience to see what I can expect coming into this season hoping to make the roster.”

Scoring at a point per game or over in his Bantam and Midget seasons, it’s clear the young defender has a high offensive ceiling, but he doesn’t put too much emphasis on the need to score.

“I consider myself as more of a two-way player as defending is what I am on the ice to do,” Hunt said. “But I think that one of the best ways to defend is to keep possession of the puck and keep it away from your net so the more offensive zone time I get the better, which translates into points.

“I like getting on the score sheet, but one of my favourite things to do is play against the other team’s top players. I get satisfaction from shutting them down and frustrating them. It helps me grow and it helps my team win games.”

The Brandon, Man. product’s impressive Midget season got him the call from the Warriors, as he mentioned, where he got to suit up for some WHL action.

“I was definitely nervous [heading into my first WHL game],” said Hunt. “I knew going in that I just needed to play to the best of my abilities and use the success I have previously found to increase my confidence. I went in focused and ready to go and I thought it went well. It was a really cool experience playing in front of all those fans who were very engaged because of the season Moose Jaw was having.

“It was very neat being beside all those guys on the bench with all their different backgrounds. I am used to growing up playing with the same guys season after season, so it was cool to get in with a different group of guys who were excellent to be around and just take in their reaction to everything. It was a very good learning experience.”

Playing for the Warriors, Hunt recorded a goal and an assist in nine games with two penalty minutes and a plus-4 rating. Scoring a goal in the WHL as a 15-year-old is no easy task and doing it from the blue line is even harder, which made it all the more special for Hunt.

We're celebrating milestone moments for five WHL players and their first 🚨 in this week's Dailies Total1 Feel Good Moment of the Week! pic.twitter.com/w2FRSyHdyF

“It was surreal, I honestly kind of blacked out,” stated Hunt. “I remember it, but at the same time I don’t. The feeling and the outcome I remember but the little details were a blur. I shot the puck and it went in, and when I turned around and everyone was looking at me it sort of hit me that I had just scored. It wasn’t until after the game that it truly hit me that I had scored my first WHL goal. In the moment it felt like a dream.”

Hunt got to share the moment with some family who made the trip to Saskatoon to watch the game.

“My dad was at the game, he was really excited and stood up and gave everyone high fives, even the opposing fans,” Hunt said. “It was a special moment for him as he has always been there for me and always given me the best opportunities and I think that the goal was significant in showing that all the hard work he has put in is finally starting to pay off. I am so happy he was there to share the moment with.”

Now that the Moose Jaw prospect has tasted WHL action, he turns his focus to next season where he hopes to become a key part of the Warriors team.

“It’s been a busy summer for sure, with the U17 camp [with Hockey Canada], training on and off the ice every day, and getting to talk with some of the pro guys around Brandon,” said Hunt, who attended the national under-17 development camp with Hockey Canada in Calgary. “I’ve been very focused as this is the biggest summer of my career and I need to be prepared for camp to showcase what I am capable of.”

With the flurry of training and preparation, Hunt is still finding time to enjoy what could be his last month at home before moving to Moose Jaw.

“This could be my last season in Midget, so I am trying to hang out with my friends as much as I can before I have to leave for training camp because I may not be back after until next summer,” Hunt said.

Hunt and the Warriors will kick off their preseason in the Regina Pats Tournament on Friday, August 31 when they play the Saskatoon Blades at 3:00 p.m. CST at the Brandt Centre in Regina Sask.

The ability to fly

What trend/fad do you hope comes back?

What song could you sing start to finish with only your memory?