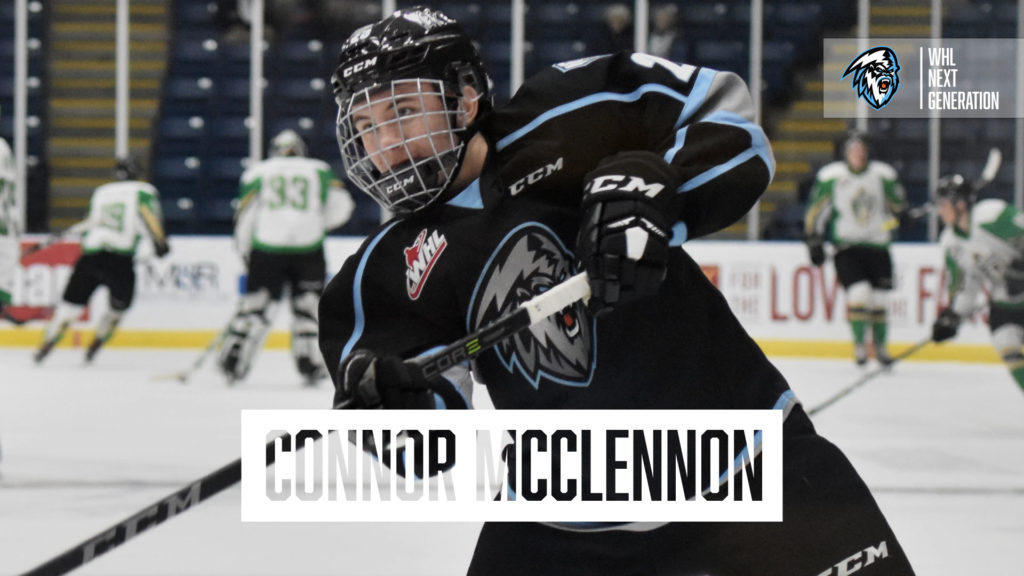 Connor McClennon has been an offensive threat for every team he has played for, compiling 44 points (26G-18A) in 23 games before scoring just shy of 100 points with 99 (45G-54A) in 30 games during his Bantam years. This led to high expectations and a 2nd overall selection in the 2017 WHL Bantam Draft by the Kootenay ICE.

The 2002-born forward embraced the expectations and recorded 67 points (26G-41A) in 31 games in his first Midget season. Adding 11 points (4G-7A) in five games during the playoffs.

“Overall it was good,” said McClennon. “We had a bit of a slow start as a team, but we came together and were able to win the championship. We had a really good coach in Matt Tassone and I felt like he helped me develop a lot as a player.”

The Wainwright Alta. product has found a lot of success, winning the CSSHL Championship last year and being named CSSBHL Most Valuable Player after leading the CSSBHL in goals, assists, and points two seasons ago in a year that also saw him win the CSSBHL Championship.

“I have a lot of it hung up in my room,” said McClennon on where he keeps all his trophies and plaques. “My mom keeps a tote with the rest, but I like to see it and use it as motivation heading into future seasons.”

What a feeling #Champions pic.twitter.com/4YLP8uyfeT

While McClennon has found success at almost every level he has played, he contributes his impressive play to his teammates.

“I love scoring goals and getting on the score sheet, but I wouldn’t be there without my line mates. I’ve had great line mates throughout Bantam and Midget. Guys like Kyle Crnkovic, who I’ve played with over the last two years and have really bonded with and have good chemistry with. We were actually battling for the scoring race on our team, but it was just really good to get to play with him again.”

The Kootenay ICE prospect has also found success at the provincial level, scoring 10 points (6G-4A) in five games for Team Alberta at the WHL Cup, taking home the Silver Medal.

“I learned a lot,” said McClennon. “I had a great coaching staff, really good teammates and unfortunately we just fell short to [Team] British Columbia. Overall I made some great new friends and thought we played well together.”

With trophies, league titles and tournament medals in his past, the Kootenay ICE are hoping that McClennon becomes a well-known face around their arena. To prepare him for life in Kootenay, the ICE called McClennon up to play for five games during the season.

“They were really good to me. It was a learning curve for me and it was good to see what level I have to play at to step into the lineup next season,” the former second-overall pick said. “It’s a big jump, you are playing against men, not boys anymore, I mean some of these guys have full grown beards, but I’m excited and optimistic about the task of attempting to break into the lineup next season.”

Playing against guys four to five years older can often intimidate young players, but McClennon took it in stride and tried to enjoy himself, taking in as much as he could.

“I just tried to stay loose, not get too tight and just go out and play my game. It was really fun, [Head Coach] James [Patrick] was really good to me and I learned a lot in my first game [in the WHL].”

Thank you to the @WHLKootenayICE for the amazing opportunity and experience with the team. Truly a first class organization. pic.twitter.com/2oNAuafpyv

With a roster spot potentially available, now that McClennon is eligible to play a full season, the work has increased and the preparation for fall training camp is in full flight.

“I’m trying to get bigger and stronger to play against the bigger opponents but I’m also trying to get faster. Being a smaller player, you need speed and the ability to be elusive is a huge factor in playing against the bigger guys. I’m lucky to have a good training partner in [former WHL player] Adam Huxley who has been pushing me in the right direction in preparing for next season.”

With another prodigy in Peyton Krebs, McClennon will look to add to a solid core growing in Kootenay and will hope to help them return to the playoffs for seasons to come.

McClennon and the ICE kickoff their pre-season in the Red Deer Rebels tournament against the Calgary Hitmen at Enmax Centrium, Red Deer Alta. on Friday August 31st at 3:00 p.m. MDT.

What is your favorite movie?

The ability to fly to I could get to places much faster.

What is a hobby of yours that most people don’t know about?

What trend/fad do you hope comes back?

I hope the fanny pack comes back. They are so convenient as you can have everything you need in one place.