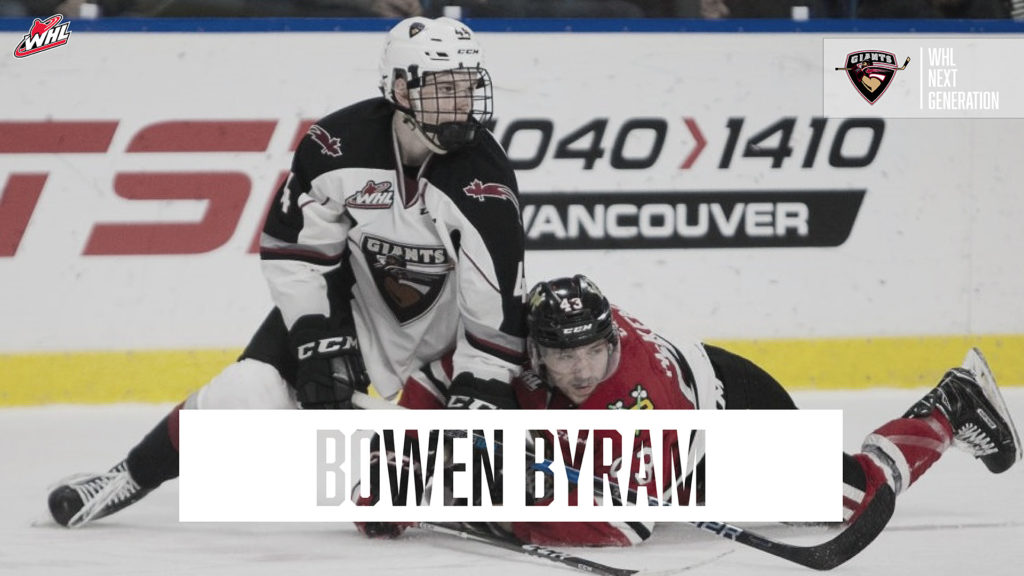 The Vancouver Giants will be looking to new names and new faces to spark the offensive contributions from the blue line this coming season.

One of those faces is of rookie defenceman Bowen Byram, though he’s relatively familiar to the Giants already. Now a year older and more experienced, he’s looking to bring his offensive abilities to a Giants defensive corps that is still young and looking to find their way back to the top of a competitive B.C. Division.

“It’s just been good to get back on the ice and get back into some games,” said Byram of his 2017 camp and pre-season with the Giants. “It’s been a really good pace during camp, so it’s been fun so far.”

Drafted by the Giants third overall at the 2016 WHL Bantam Draft, the 6-foot-0, 176-pound blue liner who was also named the 2016 HockeyNow Alberta Minor Hockey Player of the Year has already begun to contribute to his WHL club.

The 16-year-old’s two goals and three assists in five pre-season games is tops among non-import rookie defencemen in the league. With Bowen in the lineup, the Giants have also enjoyed one of their more successful pre-seasons in recent memory, going 5-1.

On top of that, the Cranbrook, B.C. product has also been settling in nicely to his new digs at the Langley Events Centre.

“They’re in a really great location,” he continued. “It’s beautiful here and I’m just really excited to put myself in a position to hopefully make the team.”

Huge thank you too @HockeyCanada for putting on such a great event. Honoured to be apart of it. #Canadianway pic.twitter.com/93GKDkD8rr

The return to the Lower Mainland has been a long time coming for Byram. He spent two years with the Lethbridge Golden Hawks Bantam AAA program, winning a provincial title and being named the league’s top defenceman in 2015-16. From there, he enrolled at the Yale Hockey Academy early last season, where he also wound up being named the league’s top defenceman for Midget Prep players.

“I just found that if I was going to be a hockey player I figured that it was the best decision to make,” he said. “A spot opened up and obviously Yale’s known for developing Midget players, so I just thought it was a good opportunity and I had to take advantage of it.”

The move turned out to be a productive one for the left-handed defenceman. In 20 games for Yale this season, Byram notched 29 points (five goals, 24 assists), placing him third among CSSHL Midget Prep league defencemen.

He also had the opportunity to play alongside a number of other top WHL draft picks including Medicine Hat Tigers first rounder Josh Williams and Lethbridge Hurricanes playoff hero Dylan Cozens.

“We were a pretty young team but we still competed really well in that league and I just think it was great to just have a year where I could put up some points and whatnot to get comfortable playing against bigger and stronger players,” Byram said. “I think it just developed me well and put me in a good position to make the Giants.”

In addition to playing at Yale last season, the then-15-year-old puck-moving defenceman was also able to join get his feet wet in the WHL thanks to an extended 11-game stint with the Giants.

“It was a great experience; I think it was great for my development,” he added. “I took advantage of it and I’m hoping to use that in my game and show the evaluating staff of the Giants that I can play at this level.”

Byram and the Giants kick off the 2017-18 Western Hockey League regular season Sept. 22 with a visit to Vancouver Island to take on the Victoria Royals. They’re back at home on Sept. 23 to kick of a five-game home stand by playing host to the Royals at the Langley Events Centre. Puck drop on that game is at 7 p.m.