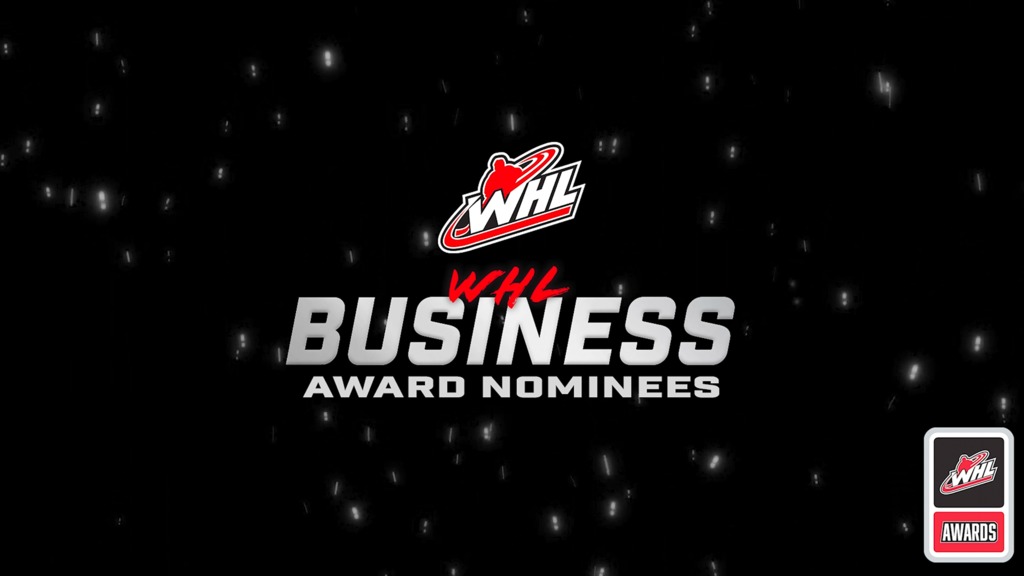 Calgary, Alta. –  The Western Hockey League announced today the 2021-22 Division nominees for the WHL Business Award, awarded annually to the WHL Club that best exemplifies giving back to the community and producing an electrifying game-day experience for fans.

All individual WHL Division Award winners will be eligible for the overall WHL Awards, to be announced June 1, 2022.

Kamloops Blazers: Despite the challenges of COVID-19, the Kamloops Blazers continued to maintain and build their financial performance this season. Limited by capacity restrictions of 50 per cent for 14 home games, the Blazers managed to sell out each of those games while sponsorship sales have steadily increase.

A highlight of the season for the Kamloops Blazers was the successful Indigenous Night in partnership with Tk’emlúps te Secwépemc. A local Indigenous artist designed the event logo, which incorporated a meaningful story pertaining to the heritage of the local Indigenous group, and was emblazoned upon special edition Kamloops Blazers jerseys. The game-worn jerseys were auctioned off and raised over $15,000 in support of a charity of choice of  Tk’emlúps te Secwépemc.

The 2021-22 season has seen the Blazers enhance their WHL Live production, including new digital marketing efforts to showcase sponsors and partners through WHL Live. The Blazers have also enjoyed great success with new loge seating options at the Sandman Centre, re-engaging the Kamloops business community in a new and exciting way.

New eight-game mini-packs have helped to drive ticket sales coming out of COVID-19, and group sales are on the rise thanks to the reignition of relationships with groups like Copperwood, Lethbridge Minor Hockey, and various school groups. A strong relationship with the Lethbridge Community College Students’ Association has helped the Hurricanes to generate further ticket sales.

At the heart of the Lethbridge Hurricanes in-game experience is the Megatron Digital Video Board. Thanks to the video board being easy to disassemble, it is now being utilized for other events and rentals throughout the city and province, generating additional revenue for the Hurricanes. Not only does the Megatron Digital Video Board have an impact on a game night, it continues to work wonders for the Hurricanes during the off-season.

The Hurricanes have donated in excess of $115,000 back into the surrounding community in Southern Alberta, including $60,000 for the Lethbridge Food Bank and over $16,000 for the Canadian Tire JumpStart program.

Prince Albert Raiders: During the COVID-19 pandemic, the Raiders switched ticketing systems, implementing Paciolan to allow fans to purchase season tickets, store tickets, and manage their ticketing account online for the first time in Raiders history. The upgraded platform was vital in the renewal of 90 per cent of the Raiders season ticket base from 2019-20.

Utilizing the CHL App, the Raiders worked to recreate the in-game experience. The addition of Fannex aided in the launch of seven interactive games that have been used throughout the 2021-22 WHL season, giving fans and patrons the ability to play along during stoppages in play. The implementation of Fannex has contributed to an eight per cent increase in corporate partnership this season. Further enhancing the CHL App experience for Raiders fans, the Club worked with the Art Hauser Centre’s concession partner to add online food and beverage ordering, online 50/50 ticket sales, access to the Raiders Team Store, and more.

The Club launched a number of community and promotional programs during 2021-22, including fan personalized game pucks as part of the Raiders 50th Anniversary Season. A partnership with Prince Albert Pride helped to generate a $1,000 for the group through the sales of Raiders Pride t-shirts. A new merchandise partnership with the First Nations-owned Smudge the Blades helped to generate contributions towards KidSport in Prince Albert, while 50/50 sales contributed nearly $30,000 to the family of the late Matt Swaby and an additional $4,000 to the Adam Herold Legacy Foundation.

Everett Silvertips: The Everett Silvertips enjoyed a season ticket renewal rate of 90 per cent from 2019-20, with a focus on building and expanding the ticket holder base coming out of COVID-19. Relaxed exchange policies, holds through mandates, and adjusted payment plans, the Silvertips were able to success provide a better customer service and fan experience on the ticketing front through challenging times.

A number of new promotional and ticketing initiatives were developed heading in 2021-22, in an effort to welcome fans back to the arena, including a Paper Airplane Toss with over $10,000 in prizing sponsored by local small businesses; the embracing of organic fan entertainment including Taco Hat Trick awareness, and sing-a-longs; Undie Sunday, which collected over 3,500 units of undergarments for those in need; the Great Small Dog Race Series, which served as a pet waste awareness campaign for Everett Public Works; Union Solidarity Night; and Fill the House for Housing Hope featuring a donation to the local affordable housing non-profit for every Silvertips home win.

The Silvertips were a participant in the battle of the Sound – a road game for the Silvertips against the Seattle Thunderbirds at Climate Pledge Arena – home of the NHL’s Seattle Kraken. Nearly 40 per cent of the fans in attendance on February 26, 2022 came from Everett.