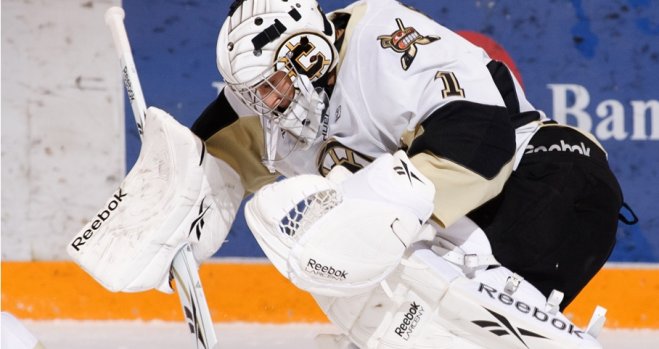 Gore, a goaltender from Kamloops, B.C., was a workhorse for the Chilliwack Bruins last season. He played in 64 of the team’s 72 regular season games and compiled a 31-23-7 record to go along with an impressive .911 save percentage. In three full seasons with the Bruins, Gore had a 3.31 career goals-against average and a .905 save percentage. He also played in 11 career playoff games with Chilliwack.

“Lucas brings a ton of experience to our squad and will be able to contribute to our team immediately,” Sautner said. “Lucas and A.J. (Whiffen) will be a very solid tandem for us in the seasons to come.”

Tendler, a 6’1″ blueliner from Viceroy, was named the 2011 SJHL Defenceman of the Year after a spectacular 20-year-old season with the Yorkton Terriers. He had 11 goals and 27 points for Yorkton in 47 regular season games and added four assists in 11 playoff contests last year. Tendler played for the Prince Albert Raiders for three full seasons before finishing off his junior career with two seasons in Yorkton.

“Blaine is a big, mobile defenceman that has a good first pass and is very steady,” Sautner said. “His offensive capabilities will be a definite asset to our team as he has proven to be a valuable guy on the power play in the past.”

Kot, a defenceman, played in 85 regular season games for the Red Deer Rebels over parts of three seasons. He won an MJHL championship and the Anavet Cup with the Dauphin Kings as a 19-year-old and finished off his junior career with Estevan (SJHL) last season, registering 24 points in 36 regular season games and scoring five points in nine postseason contests.

“Joel is a mobile defenceman who will be a great addition to our team,” Sautner said. “He’s a slick passer, has a good shot, and was a huge part of the Dauphin team that played in the Royal Bank Cup back in 2010.”

The three recruits bring Sautner’s recruiting class up to nine players. Seven players committed back in early June, but goaltender Andrew Hayes has opted to pursue a spot in the professional ranks.

The Cougars begin their 2011-12 schedule with a non-conference game at Saskatchewan on Sept. 9. The team’s Canada West slate begins on Oct. 7 and 8 with a pair of games against the University of Alberta in Edmonton.