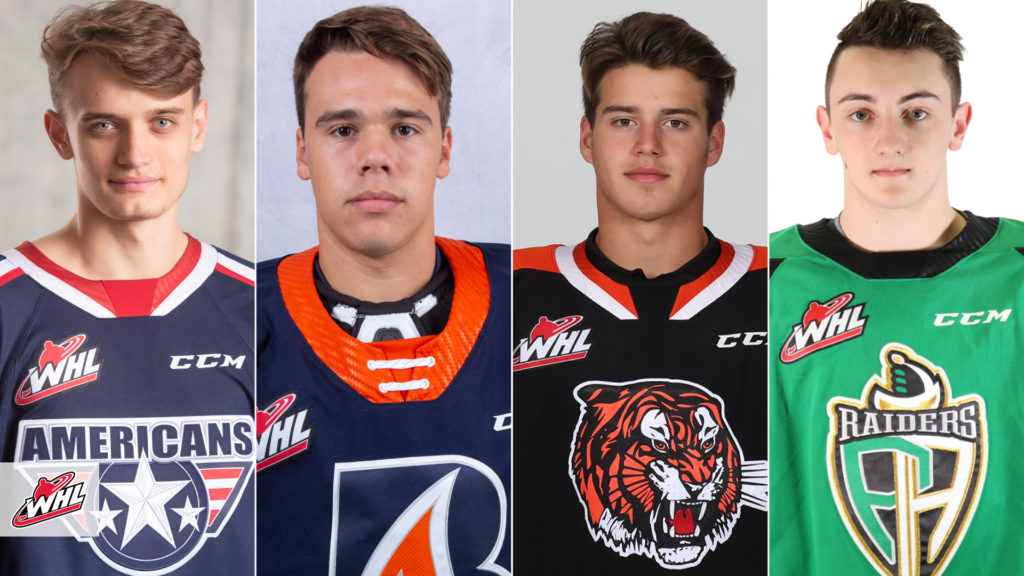 With the 2019-20 Western Hockey League Regular Season beginning on September 20, 2019, many milestone moments for players have already taken place as first career WHL goals were earned.

With rosters taking their shape after an exciting 2018-2019 season, the players were itching to get back on the ice. The first three days of action from September 20 through to September 22 saw 11 players find the back of the net for their first career WHL goals.

After the banners were raised at the Art Hauser Centre, the Prince Albert Raiders and Saskatoon Blades clashed for the first time this season. Rookie Landon Kosior potted his first WHL goal when he found the back of the net from the half wall. Kosier rifled a shot into the top net from just inside the right hashmarks 11:28 into the second period.

In a heated southern Alberta rivalry match to start the season between the Lethbridge Hurricanes and Medicine Hat Tigers, the 11th-overall selection from the 2018 WHL Bantam Draft, Cole Sillinger, found the back of the net for his first goal in the WHL. The Regina, Sask. native sniped home a goal on the power-play at 12:14 in the second period.

On Friday, Lethbridge Hurricanes rookie Jacob Boucher found the scoreboard tucking home a short-handed breakaway goal against the Tigers. The forward showed great speed and anticipation on the penalty kill and went upper glove side at 2:48 into the third period.

In the inaugural Battle of Manitoba between the Brandon Wheat Kings and Winnipeg ICE, rookie import Michal Teply scored his first goal in the WHL which would eventually be a game-winner for the ICE. The Chicago Blackhawks prospect found the back of the net early in the third period after he found pay dirt just outside the crease showcasing a sweet set of hands to bury the puck past the Wheat Kings goalie.

The last first goal scored on Friday night was a beauty from Kamloops Blazers’ forward Logan Stankoven against the Spokane Chiefs. After notching 15 points (8G-7A), in the pre-season. Stankoven potted his first WHL regular season goal in the dying seconds of the first period to give the Blazers a 1-0 league. Look for the Kamloops, B.C.  native to continue with his hot start in games to come for the Blazers.

On Saturday, Hurricanes’ winger, Oliver Okuliar also potted his first goal in the WHL, securing the win for the Hurricanes with an empty-net goal at 19:20 in the third period.

🚨OLIVER OKULIAR WITH THE CANES THIRD OF THE NIGHT!!! 🚨 pic.twitter.com/GgVYNxlWnZ

In Moose Jaw, a rematch  match took place between the Pats and Warriors at Mosaic Place. Following a brilliant solo effort from Pats forward Garrett Wright, Sloan Stanick cleaned up the rebound for the first goal of his WHL career.

In another rivalry game, the Portland Winterhawks opened their season against the Tri-City Americans at the Moda Center. Both teams had players secure their first WHL goals as Simon Knak and Jan Cikhart scored for the Winterhawks and Americans respectively. Knak scored his goal with just under five minutes left in the second period, while Cikhart found the back of the net with just under ten minutes remaining in the third. Knak fired a shot from just inside the blueline that took a redirection off an Americans’ player and beat the goaltender at 13:04 in the second period. Cikhart and the Americans’ caught the Winterhawks on a three-on-one, where Cikhart showed patience and beat the Winterhawks’ goaltender with a shifty wrap-around move.

2019 Import Draft pick Jan Cikhart gets the Ams on the board with his first WHL goal!#WHLOpeningWeek pic.twitter.com/vISufkPtsZ

In a B.C. Division match up, Prince George Cougars forward Mitchell Kohner scored his first WHL goal against the Vancouver Giants. Kohner received a beautiful pass from Cougars’ rookie Craig Armstrong and slotted the puck past the Giants goalie at 17:38 in the first period.

On Sunday, Edmonton Oil Kings rookie forward, Jesse Seppälä scored his first WHL career goal against the Red Deer Rebels 5:34 in the second period. Seppälä was in the right place at the right time after a redirected shot from the slot took a deflection and the puck landed right on his stick. Seppälä’s goal would be the game winner for the Oil Kings as they would take the victory, 4-1.