WHL Firsts: Six phenomenal firsts round out the week 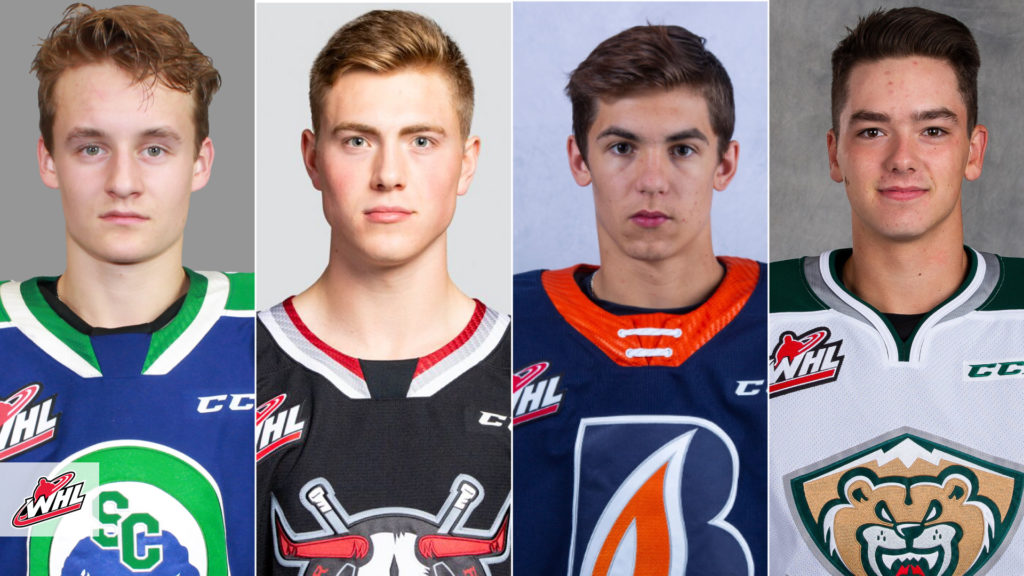 Six milestone moments led the way this past week in Western Hockey League action. Players from three divisions found the back of the net for memorable first goals in the league. Rounding out the week was Dylan Anderson of the Everett Silvertips, Raphael Pelletier of the Swift Current Broncos, Daylan Kuefler of the Kamloops Blazers, Joel Sexsmith of the Red Deer Rebels, Carson Latimer of the Edmonton Oil Kings and Noah Danielson of the Medicine Hat Tigers who all scored for their respective teams.

Starting the week for WHL Firsts was Silvertips defenceman Dylan Anderson who found paydirt on Wednesday against the visiting Spokane Chiefs. The first-year product of Langley, B.C. potted his first goal in the league after finding space along the blue line and wristing a shot past Chiefs goaltender Campbell Arnold. The 5-foot-10, 180-pound defender finished the game with a goal and an impressive plus-two rating. The hosting Silvertips would hold out for a convincing 4-0 win.

On Friday the Swift Current Broncos visited the East Division leaders, the Prince Albert Raiders. After falling behind, the Broncos evened the game up on Raphael Pelletier’s first career goal in the WHL. Pelletier tied the game at 14:24 into the second period, redirecting a point-shot from Jaxan Kaluski. Although the Broncos would make a push, it wasn’t enough as the team fell short by a final score of 4-1. Pelletier was one of the bright spots for the team, contributing on both ends of the ice.

Raphael Pelletier buries his first @thewhl goal! 1-1 in PA in the 2nd.

On Saturday the Blazers picked up a big win over the Portland Winterhawks at the Sandman Centre. After establishing a 3-0 lead, Daylan Kuefler extended the lead with his first goal in the WHL. The rookie from Stettler, Alta. potted his first goal after the forward found open space in the Winterhawks zone and sniped a shot between the legs of Portland’s goaltender Joel Hofer. Kuefler was dangerous for the Blazers, finishing the night with a goal, three shots on net and a plus-one rating.

On Sunday at the annual Teddy Bear Toss game in Calgary, the Rebels spoiled the party for the hosting Hitmen by pulling off a big 3-2 overtime win. Picking up his first career goal in the WHL was Joel Sexsmith whose first marker sparked the comeback win. The ninth-overall selection in the 2017 WHL Bantam Draft found the back of the net early in the third period at 2:04. The defenceman from Edmonton, Alta. finished the evening with a goal and a plus-one rating in the win.

Rebels and Hitmen are tied 2-2 after 3 periods. Rebels goals by Joel Sexsmith and Cam Hausinger. For Sexsmith it was his first WHL goal. Shots are 30-23 CGY. #RDR

Carson Latimer of the Oil Kings had a memorable debut on Tuesday against the Moose Jaw Warriors, scoring his first goal on his first shift in the league. The Surrey, B.C. product opened the scoring at 3:05 into the first period after skillfully flipping the puck up-over the Warriors goaltender to give Edmonton the lead. Making the goal more impressive was Latimer flipped the puck with only one hand on his stick while holding back a Moose Jaw defender. What a start for the rookie!

Rounding out this week’s edition of WHL Firsts was Noah Danielson who potted his first goal in the league for the Tabbies on rivalry night. Danielson, the product of Olds, Alta., buried a backhand shot after a great solo effort from Tigers forward Elijah Brown found the second-year forward right outside the Hurricanes’ crease. Medicine Hat would not slow down finding the back of the net eight times in a convincing win over their Central Division rivals.