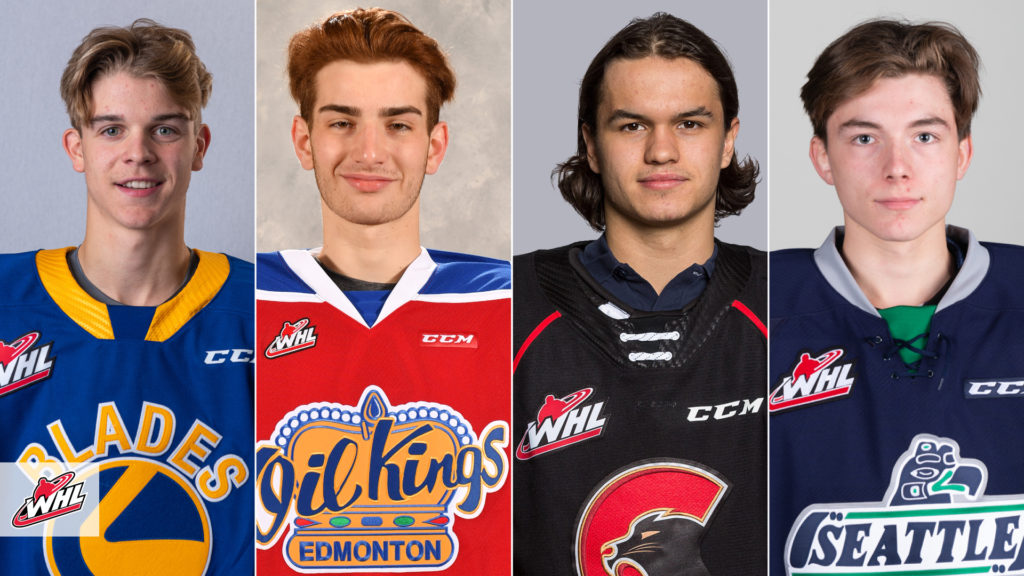 This includes a player who not only scored his first goal, but had a follow-up game to remember in Seattle with the first career hat trick of his WHL Career. Also, a rookie goaltender in Edmonton collected his first win and shutout in the same game, putting forth a dazzling performance. Overall, the U.S. Division finished the week with the most firsts of all four divisions.


In a U.S. versus B.C. Division clash between the Seattle Thunderbirds and Kamloops Blazers, Thunderbirds’ rookie Conner Roulette potted his first goal in the WHL. Although the Thunderbirds would drop the match, Roulette had a great game. The product of Winnipeg, Man. redirected a point shot at 9:43 of the first period, leveling it for the Thunderbirds. The 5-foot-11, 158-pound winger had a memorable week following up his first game with a hat-trick performance against the Victoria Royals on Saturday night.

Congratulations to Conner Roulette on his first goal in the WHL last night in Kamloops.

A post shared by Seattle Thunderbirds (@seattlethunderbirds) on Oct 3, 2019 at 10:00am PDT

Pavel Novak of the Kelowna Rockets scored his first career WHL goal against the Tri-City Americans on Wednesday night. The first-round selection from the 2019 Canadian Hockey League Import Draft found the back of the net on a 4-on-3 powerplay after he skated in from the point and rifled a shot into the upper-netting past the Americans’ goaltender. Novak would finish the night with three points (1G-2A) and was the first star of the game.

NOVAK HAS HIS FIRST @TheWHL GOAL!

In the same game, the Americans had a rookie score his first goal in the league as well at 16:06 in the second period. Edge Lambert found pay dirt after redirecting a shot from Tom Cadieux.

It was also a big evening for the Saskatoon Blades as the team took home a 3-2 win against the Lethbridge Hurricanes at the Enmax Centre in Lethbridge, Alta. After falling behind in the second period, Blades rookie Jayden Wiens banked a shot off the Hurricanes’ goaltender from behind the net to tie the game at two apiece at 16:59 of the third period.

Backstopping the Blades to the win was Koen MacInnes , who turned away 36 of the 38 shots he faced. The Burnaby, B.C. product stopped 11 shots in the first, 14 in the second and 13 in the third. MacInnes was pivotal in the game playing a big role in helping isolate the Hurricanes’ powerful power-play unit.


To open action on Friday night, the Portland Winterhawks visited the Hurricanes in a match forcing quality performances out of both teams. After bagging the early lead, the Winterhawks would break on a short-handed attack that led to Nick Cicek to rip a shot from the point that would beat the Hurricanes’ goaltender, extending the lead for the Winterhawks by two.

Catch up with @Nick_Cicek134 and watch his beautiful goal on repeat. 🎥 pic.twitter.com/pmTKglJPqi

Down two goals, the Hurricanes were not out of the game. Following a D-Jay Jerome goal, Lethbridge rookie Chase Wheatcroft was sprung on a breakaway giving him the chance to tie the game. The Calgary, Alta. product would not disappoint after putting on a couple dekes before putting the puck between the pads of the Winterhawks’ goaltender, evening the game at 2-2. The Hurricanes would go on to win the game with a final score of 4-2 with Wheatcroft picking up the first-star of the game.

His first #WHL goal, unassisted, and what a beauty 😍😍#YQL #WHLCanes #CaneTrain

On Friday there was also an all Saskatchewan match-up between the Prince Albert Raiders and Blades at the Art Hauser Centre in Prince Albert, Sask. After falling behind, the Blades power-play unit got to go to work. The Blades would tie the game after defenceman, Aidan De La Gorgendiere fired a point shot that would beat multiple screens and sneak past the Raider goaltender. The Blades would take the game by a final score of 2-1.

The Medicine Hat Tigers bounced back after a loss the week prior with a dominant win against the Pats on Friday. The Tabbies got a boost of scoring from right across the board including the first career WHL goal for Caleb Willms. The Cochrane, Alta. product showed a burst of speed winning a foot race to the puck and creating a two-on-one for the Tigers, Willms would out wait the Pats goaltender and backhand a beauty.

Campbell Arnold played a big role on Friday night in the Spokane Chiefs’ win over the Thunderbirds. In the heated U.S. Division rivalry game, Arnold turned away 30 of 31 shots in the game and made some big saves when it mattered for his team. The Nanaimo, B.C. goaltender stopped 10 shots in the first, 10 in the second and 11 in the third backstopping his team to his first career WHL win in front of the Spokane Veterans Memorial Arena faithful.

In a Central Division matchup, the Red Deer Rebels rolled pasted the Swift Current Broncos on the back of both veteran and rookie scoring. After going pointless in the pre-season, Rebels rookie Keaton Sorensen all but secured the win for the Rebels. The 5-foot-9, 150-pound centre jumped on a rebound late in the third period and backhanded a shot past the Broncos goaltender. The Rebels took the game by a final score of 5-1.

It was a big game for the Oil Kings after their rookie goaltender, Sebastian Cossa, turned away 40 shots to pick up his first career win and shutout in the same game. The Fort McMurray, Alta. product was big for his team stopping 14 shots in the first, 18 shots in the second and eight shots in the third period. Cossa played a big role in shutting down a dangerous ICE power play, making some big saves while the opponent had the advantage.

The Everett Silvertips opened the ‘firsts’ scoring action on the road against the Kamloops Blazers on Saturday night. Following two goals from the Silvertips captain, Bryce Kindopp, the team would find its game-winning goal through 2019 import forward, Michal Gut. After finding Kindopp on the first goal of the game for the Silvertips, Kindopp returned the favour with a great pass that Gut sniped past the Blazers’ goaltender. The Silvertips would go on to win the game 3-2.

Blazers forward Caedan Bankier scored his first WHL career goal for the home side on Saturday night at 14:39 in to the second period. Bankier sniped a shot past the Silvertips goaltender just outside the crease after being set up by a beautiful pass from Captain  Zane Franklin.

Lighting the Lamp! 🚨🚨 @c.bankier_19 with his game puck from Saturday’s game vs Everett. His first @westernhockeyleague GOAL!

The Rebels rookies picked up another first this weekend on the back of a great goal from Jaxsen Wiebe against Division rivals, the Medicine Hat Tigers. Wiebe opened the scoring in the game after receiving a great pass in the slot from Jayden Grubbe. The Moose Jaw, Sask. product buried the shot past the Tigers’ goaltender at 15:22 in the first period to give the Rebels the lead.

Rebels with a 1-0 lead in Medicine Hat after 1 period. Jaxsen Wiebe with his first WHL goal. Shots are 14-9 MH. #RDR

The Prince George Cougars picked up a big win against the Rockets at home on the backs of strong rookie performances. On the scoring side, the Cougars rookies got on the board, extending the lead with a first WHL goal from Ethan Samson on the power play at the half-way point of the second period. The second rookie for the Cougars, import forward, Filip Koffer would add an empty-net goal for his first WHL goal as well.

On the back end, the Cougars got a great game from rookie goaltender Tyler Brennan. The 18th-overall selection in the 2018 WHL Bantam Draft stood tall, stopping 26 of 27 shots he faced in the game. All three players would be the stars of the game with Brennan taking first, Koffer taking second and Samson taking third.

The kids are alright. pic.twitter.com/QWYvhoov6N

The Americans had a rookie find the back of the net for the first time as well on Saturday against the Chiefs at the Toyota Center in Kennewick, Wash. Americans’ rookie defenceman Marc Lajoie found the back of the net at 14:53 of the third period. The Saint Albert, Alta. product beat the Spokane goaltender on a knuckling point shot for the first goal of his WHL career.

.@LajoieMarc rolling into the new week with his first WHL goal ☝️🚨 pic.twitter.com/8X8rJYUUQQ

The last first goal of Saturday came in a dominant performance by the visiting Vancouver Giants against the Winnipeg ICE. The Giants got the insurance goal at 10:15 of the first period after rookie Justin Lies potted his first career goal in the WHL.

“To get my first goal in front of friends and family was a moment I’ll never forget.” – @justinlies_ pic.twitter.com/GrBvedBMWh

The Chiefs had another rookie find the back of the net on Sunday when the team hosted the Silvertips. Chiefs rookie Brandon Reller buried an amazing play tic-tac-toe’ing between three Chiefs players for their third goal of the game.

Although Spokane put up a effort, a trio of rookies helped propel the Silvertips past the Chiefs. The Silvertips tied the game at two after Kindopp found rookie Jacob Wright for his first career WHL goal. After Kindopp started a two-on-one, Wright went right to the front of the net receiving a pass directing it past the Chiefs to even the game. The next rookie to find the scoreboard was Everett winger Brendan Lee. The Seattle, Wash. product sneaked his way into the Chiefs’ zone unmarked and pounced on a rebound evening the game at 3-3.

The Silvertips got a big boost in the game from rookie Keegan Karki who helped backstop his way to his first WHL career win. After stopping all 13 shots he faced in the third period, it gave the Everett the opportunity to pot the eventual winning goal.

That feel good, everybody? #LetsGoTips

The Winterhawks had a rookie find pay dirt on the road against the Calgary Hitmen on Sunday afternoon. Winterhawks rookie, Jack O’Brien found the back of the net for his first career WHL goal after the rookie followed up on a break-away opportunity created by Portland forward Seth Jarvis. The 5-foot-10, 172-pound centre buried the rebound to tie the game for the Winterhawks.

On Tuesday October 8th,  Jonas Brøndberg of the Winterhawks scored his first WHL career goal against the Tigers. Brøndberg found open ice and snapped a beautiful shot from deep past the Tigers goaltender giving the Portland the lead at 3:56 in the second period.

Rounding out the crazy week of firsts, Raiders rookie Carter Serhyenko back stopped his way to his first win in the WHL in his first start against the Giants. Serhyenko turned away 25-of-27 shots in the game including seven in the first, 12 in the second and six in third period to round out the win.