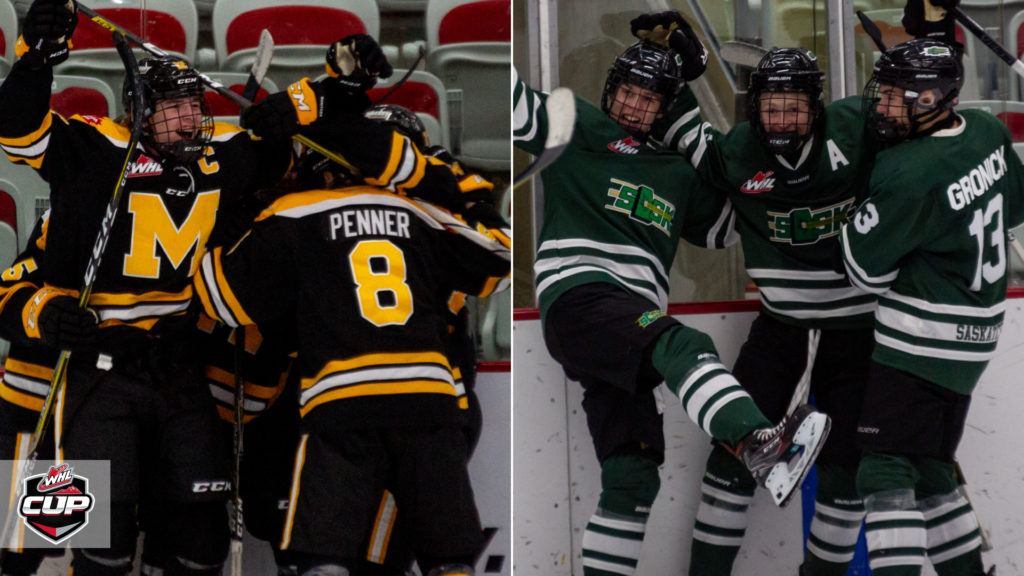 Manitoba will play for a Gold Medal at the 2019 WHL Cup after an incredible 5-4 win over British Columbia in Saturday’s first semi-final.

Leading 4-1 after 40 minutes, Manitoba coughed up three consecutive goals to the home side before Carter Anderson scored just before the final buzzer to lift his team to victory.

Manitoba started strong and kept momentum in their corner for the first two periods. A short-handed goal from Keefe Gruener put Manitoba on the board 6:54 into the opening period and Luke Robson’s first of the tournament six minutes later gave the eastern-most province a 2-0 lead after 20 minutes. Pressing for more early in the second, captain Conor Geekie struck on a penalty shot to swell the lead to three.

Carter Streek would answer back with 11:14 to go in the middle period, getting the home side on the board, but Anderson’s first of the game restored the three-goal lead after 40 minutes.

British Columbia found their rhythm in the third period and began their comeback bid. Connor Levis scored twice in a 93-second span to bring his province within a goal. With 5:05 left in regulation, Brandon Lisowksy put the two teams into a 4-4 tie, appearing bound for regulation.

On a last-gasp chance in regulation, Anderson fired the puck in from the blue line where it found its way through the British Columbian goaltender for the game-winning goal.

Ethan Buenaventura battled through a tough third, but was strong overall, stopping 42 of 46 shots for one of his top performances of the tournament.

Denton Mateychuk and Brayden Schuurman each had a pair of assists for their respective sides. 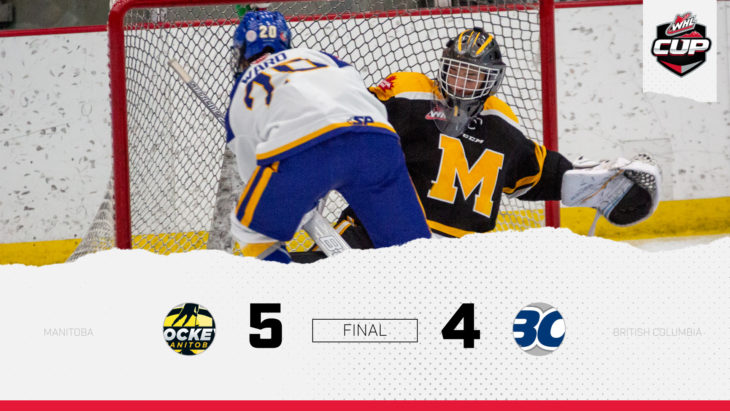 For the first time in the history of the WHL Cup, Saskatchewan will play for gold at the tournament.

Trailing 3-2 early in the third, Saskatchewan rattled off a trio of unanswered goals for a 5-3 win and a trip to Sunday’s championship game.
Carter Dereniwsky led the way for his province with a hat trick.

After a scoreless first, the two teams wasted no time in unleashing their offence in the second with Dereniwsky and Rylen Roersma trading goals in the first few minutes of the period. Hunter Mayo put Saskatchewan back in the lead, but Kaiden Ellertson had the response to tie up the contest yet again.

Early in the third, Alberta found their first lead of the game as Tyler Mackenzie struck 28 seconds into the final period. That would only serve to spark Saskatchewan though, who responded a minute later from Dereniwsky.

With 6:45 left in regulation, Saskatchewan went ahead for good as Vaughn Watterodt’s second of the tournament served as the game-winning goal. Dereniwsky completed his hat trick with an insurance goal late.

Dylan Ernst held Alberta at bay when it mattered most, stopping 27 of 30 shots for the victory. Kyren Gronick added a pair of helpers. 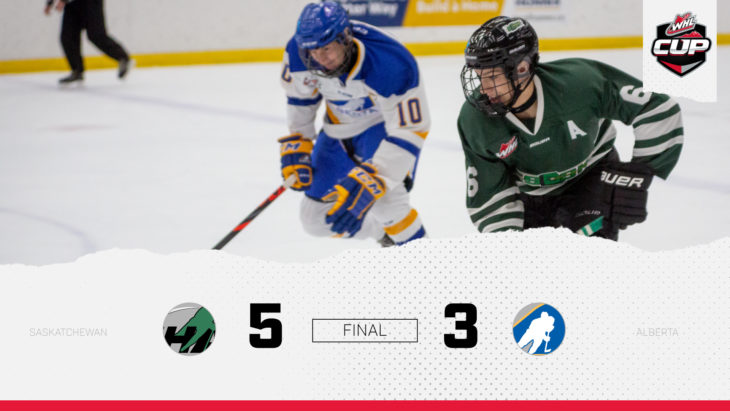 The fifth and final day of the 2019 WHL Cup is upon all four teams.

At 1:00 p.m. MT it’s the Gold Medal game at the tournament. For the first time in WHL Cup history, Saskatchewan and Manitoba will face each other for the championship.