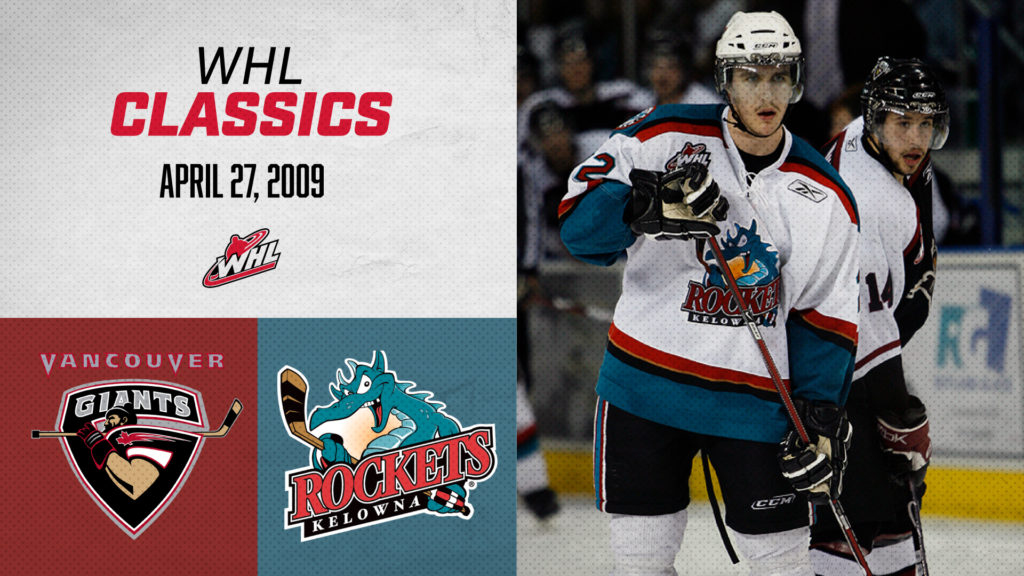 The 2009 Western Conference Championship between the Vancouver Giants and Kelowna Rockets continues Friday on WHL Classics!

We’re down to three teams left in the 2009 WHL Playoffs as the Calgary Hitmen have emerged from the Eastern Conference while the Giants and Rockets continue to duel in the West.

After back-to-back shutout wins, Game 6 will represent the first opportunity for the Rockets to clinch the series when they take to the ice at Prospera Place. The Giants were able to stave off elimination with a Game 6 road win against the Spokane Chiefs in the last round, winning in double overtime. They’ll look to bring in the same mentality against their opposition with their backs against the wall.

The Giants will lead with captain Jonathon Blum. The defenceman has provided a strong presence at both ends of the ice, leading his team with 17 points (6G-11A) entering tonight’s action. Lance Bouma has taken over sole possession of the team lead in goals with seven and will be a threat to contribute offensively as well.

In addition to the likes of Casey Pierro-Zabotel and Craig Cunningham, Evander Kane will be one of the forwards the Giants are looking to for offensive support. He scored that aforementioned goal in double overtime to extend the Giants’ season against the Chiefs and might have more Game 6 magic up his sleeve tonight.

For the home side, the Rockets boast the top two scorers in the 2009 WHL Playoffs in alternate captains Jamie Benn and Cody Almond. Benn leads the way with 27 points (10G-17A) while Almond has 20 points (7G-13A) from his stick this spring.

There’s a long line of other top contributors for the Rockets as well, including Mikael Backlund, Tyler Myers and Tyson Barrie. Backlund had a five-game goal streak that helped power the Rockets past the Tri-City Americans and featured until Game 1 of this series. He’ll look to reignite that as the Rockets look to return to the WHL Championship Series for the first time since 2005.

On the blue line, Myers and Barrie will once again take the charge, looking to provide an offensive spark while holding the Giants at bay.

Between the pipes, Mark Guggenberger will tend to the crease for the Rockets while Tyson Sexsmith takes the lead for the Giants.