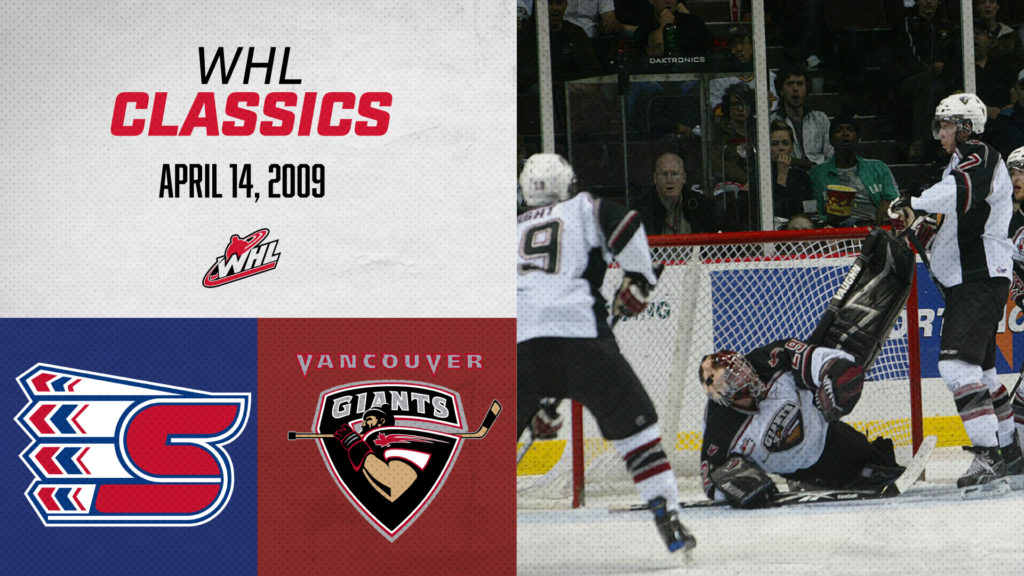 The Spokane Chiefs and Vancouver Giants will each put their respective seasons on the line Wednesday on WHL Classics!

As the second round of the 2009 WHL Playoffs draws to an end, the Chiefs and Giants will settle their fantastic series at the Pacific Coliseum with a Game 7. The winner guarantees themselves at least four more games in their season and a date with the Kelowna Rockets in the 2009 Western Conference Championship.

Each team won their first two home games in the series, but lengthy overtime magic featured in Games 5 and 6. Game 5 was a four-overtime thriller won by Blake Gal for Spokane while Evander Kane lifted the Giants to a road win in Game 6 in double overtime.

Up front, they’re led by the likes of Drayson Bowman and Tyler Johnson, with Mitch Wahl’s play-making ability helping contribute to the Chiefs’ success as well. Bowman leads the Chiefs with eight goals while Wahl leads the team with 11 assists. Both are tied for the team scoring lead with 13 points each. On the blue line, Jared Spurgeon continues to be one of the team’s leaders as well. Captained by Justin McCrae, the Chiefs will be looking for their second road win of the series.

For the Giants, they fell to the Chiefs in the second round of last year’s playoffs and would like nothing more than to deliver the same fate to their opponent from the U.S. Division one year later.

From the blue line, defenceman Jonathon Blum leads the Giants with 15 points (5G-10A) in the 2009 WHL Playoffs. With their forward group, they’ll counter with the likes of Kane, Casey Pierro-Zabotel and Garry Nunn. Blum and teammate Lance Bouma are tied for the team lead with five goals each. Kane and Craig Cunningham are right behind with four goals each while a total of 11 players have scored multiple goals for the Giants throughout the 2009 WHL Playoffs.

In net, both goaltenders bring the experience of winning a WHL Championship and Memorial Cup in recent years. Dustin Tokarski accomplished his with the Chiefs in 2008 while Sexsmith backstopped the Giants to their triumphs in 2006 and 2007. Fans should be in for a treat in the form of a strong goaltending matchup when the two teams collide for the final time this season.

Catch all the action beginning at 8 p.m. MT/ 7 p.m. PT right here via our YouTube page!