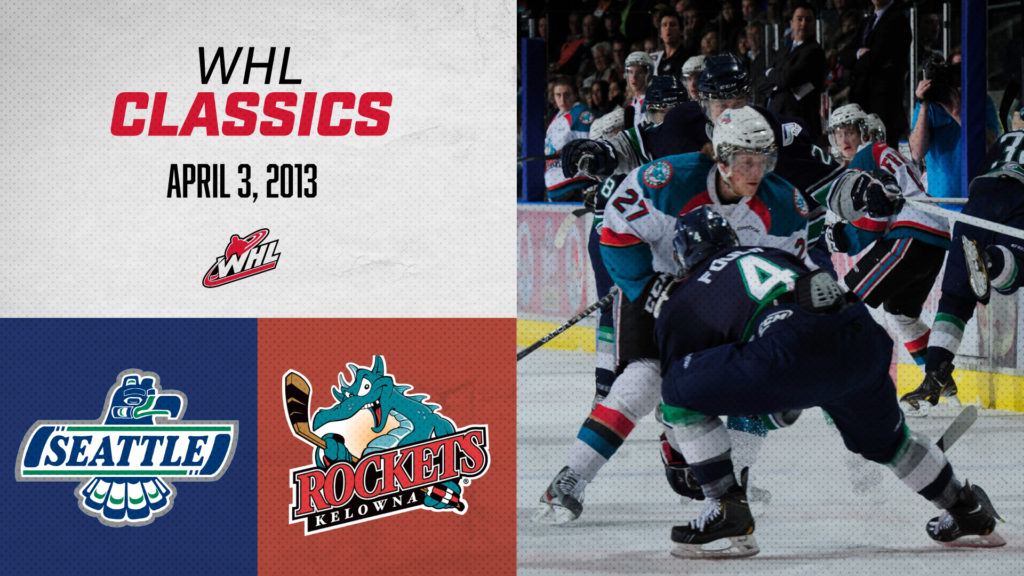 There’s Game 7 magic on the way in Wednesday’s edition of WHL Classics between the Seattle Thunderbirds and the Kelowna Rockets.

Winning the B.C. Division title and finishing second in the Western Conference, the Rockets knew they’d be one of the teams to beat in the 2013 WHL Playoffs, but nearly let it slip away to the Thunderbirds.

To Seattle’s credit, they came into Prospera Place on March 22 and won back-to-back games before pushing the Rockets to the brink of elimination with a Game 3 win in Seattle. However, the tide has since turned with the Rockets winning three-straight games to force the series to a seventh and final game in their home rink.

Starring for the Thunderbirds has been Latvian forward Roberts Lipsbergs, who posted 58 points (30G-28A) in his first year in the WHL and has six points (3G-3A) to lead his squad in playoff scoring heading into the winner-take-all game. Captain Luke Lockhart has also provided a steady offensive presence. Tallying 49 points (25G-24A) in 72 games this season, the overage captain has tallied four points (3G-1A) in the series so far and will be looking for more.

On the blue line, 2013 NHL Draft prospect Shea Theodore finished eighth in scoring among WHL defencemen with 50 points (19G-31A) in just his second full season in the WHL.

Between the pipes, overage goaltender Brandon Glover has paced the Thunderbirds through the season and will be counted upon to extend their season.

Leading the Rockets’ defence is New Jersey Devils prospect Damon Severson, who recorded 52 points (10G-42A) in 71 games this season and has added seven points (1G-6A) in the series to date.

Between the pipes, Jordon Cooke thrived with a 37-win season and will be eager to ensure his team keeps rolling into the second round.

Catch all the action from Prospera Place starting at 8 p.m. MT/7 p.m. PT on WHL Classics!