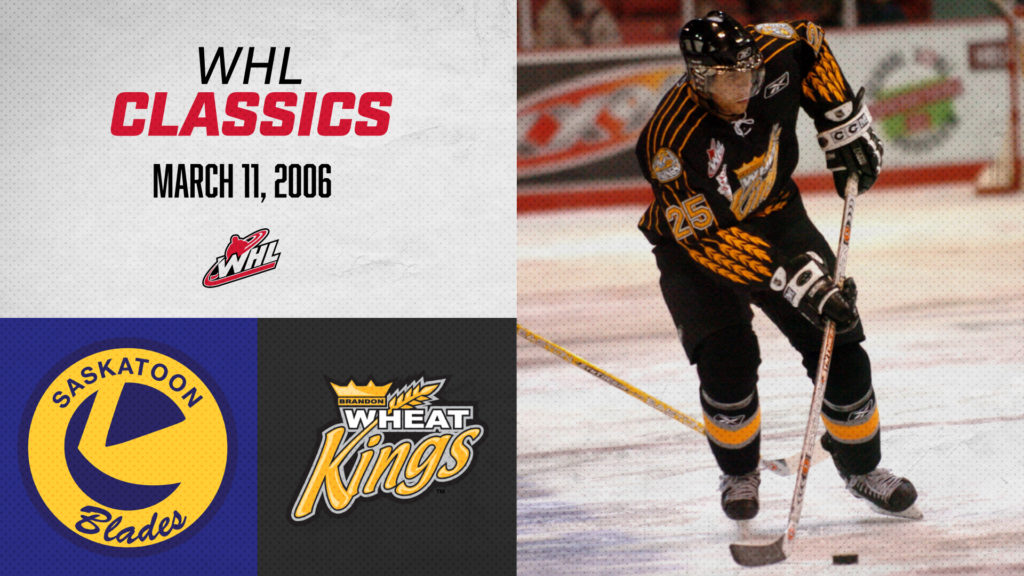 WHL Classics is back for another vintage matchup as the Brandon Wheat Kings and Saskatoon Blades meet for the second time in as many nights.

Friday in Brandon, the Wheaties finally earned their first victory from the season series against the Blades, taking them down by a 4-3 score in the shootout. As the finale of the regular season series shifts to Manitoba’s provincial capital and the MTS Centre, both teams will have plenty of motivation to go for the win.

The Blades are in the thick of the race among the best in the East Division with the Moose Jaw Warriors and Regina Pats ahead of the 2006 WHL Playoffs. Firmly locked into fourth place in the division, the Wheat Kings will be looking to prove they can compete with the other top-tier teams in their division before the close of the regular season as they prepare for playoffs as well.

Leading the Blades into Saturday’s contest is San Jose Sharks prospect Devin Setoguchi. After posting an incredible 33 goals last season, Setoguchi has already improved upon that total with 34 goals as part of an 80-point campaign to date. Overage forward Aaron Bader is also playing a leading role this season, posting a career-best 62 points (24G-38A).

Between the pipes, Minnesota Wild prospect Anton Khudobin has thrived in his first season in North America. Though he took the shootout loss last night in Brandon, he remains undefeated in regulation with a 4-0-0-1 record against the Wheat Kings this season and will be looking to add another win to his overall totals.

For the host Wheat Kings, there is provincial pride on the line as Manitoba’s lone WHL team gets set to represent in the capital of Winnipeg. Powering their roster are a number of players who call Winnipeg home, including leading scorer Codey Burki. Having compiled 55 points (24G-31A) through this point in the season, he leads his team in scoring and will be a player to watch.

St. Louis Blues prospect Ryan Reaves is another Winnipeg, Man. product looking to shine in his hometown as he nears the end of his second season in the WHL.

Meanwhile, Brandonite Mark Derlago will also be an offensive player to watch out for. He’s posted 46 points (22G-24A) to date to rank second in team scoring Scoring in last night’s game, Thompson, Man. product Teegan Moore will also be a player to take note of. After a 19-point (8G-11A) campaign in the 2004-05 season, Moore has seen his production rise to 41 points (19G-22A) entering Saturday’s clash.

Tune in at 6 p.m. MT to catch all the action on WHL Classics as the Wheat Kings host the Blades from Winnipeg!