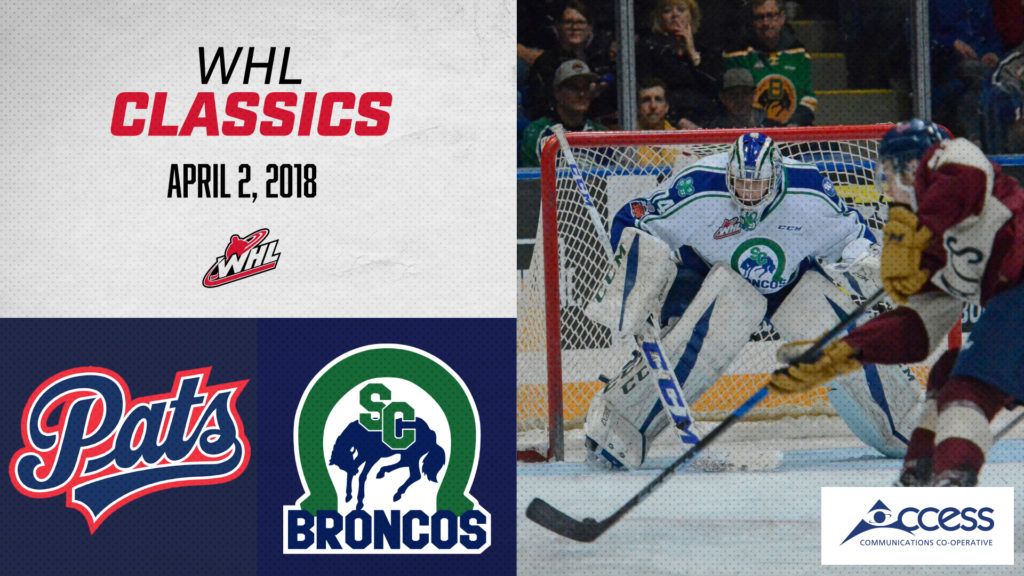 It’s a Game 7 type of day on WHL Classics as the Regina Pats and Swift Current Broncos get set to meet.

The Trans-Canada rivalry has spilled into the first round of the 2018 WHL Playoffs and the two Clubs have more than delivered through six games. Now, it all comes down to one game on Swift Current’s home turf.

Both teams have had moments of success in each other’s home rink during this series. The Pats won Game 2 and the Broncos claimed Game 3.

As hosts of the 2018 Memorial Cup, the Pats will be looking to play into spring as long as possible and a win would ensure an extension of at least four more games. Captain Sam Steel continues to be the team’s leader with nine points (1G-8A) through the first six games of the series. Following a standout overage season, Cameron Hebig has come up big in the first round with seven points (5G-2A), including a pair of game-winning goals. More importantly he is hoping for a re-enactment of Game 2 in Swift Current where he scored both goals for the Pats in a 2-1 win.

The trio of Jake Leschyshyn, Nick Henry, and Emil Oksanen continue to provide strong secondary scoring for the Pats’ forward group while the likes of Josh Mahura, Cale Fleury and Brady Pouteau have each contributed offensively from the blue line.

Countering for the home side, it’s been quite the series for Tyler Steenbergen. After recording 47 goals in 56 games during the regular season, he’s added five throughout the first six games and is the team’s leading scorer. Like Hebig, he’ll hope to re-create a similar performance to a game in Swift Current. During Game 5, the World Juniors hero tallied a hat trick as part of a four-point game in a Bronco win. Captain Glenn Gawdin isn’t too far behind either with nine points (4G-5A) to date.

Up front, the Broncos boast a litany of other offensive options, including Aleksi Heponiemi, Giorgio Estephan, and Matteo Gennaro. On the blue line, Colby Sissons has provided five points (1G-4A) so far while the presence of Artyom Minulin, Sahvan Khaira, and others have contributed to the home side’s sharpening offence.

In net, Ryan Kubic will tend to the crease for the Pats while Stuart Skinner protects the net for the Broncos.