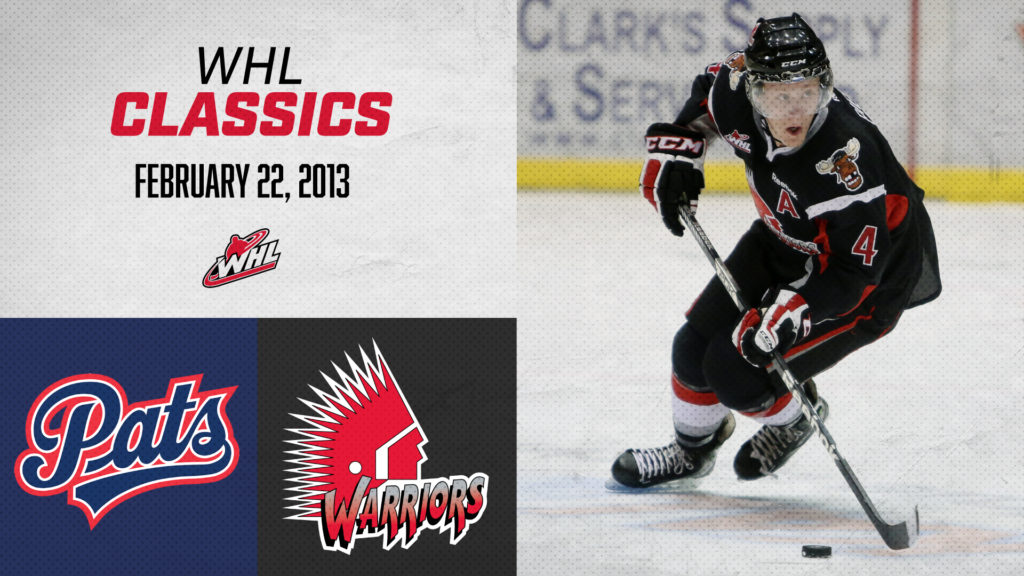 Monday on WHL Classics, we’re coming to you live from Mosaic Place for another edition of the Trans-Canada rivalry between the Moose Jaw Warriors and Regina Pats!

Though the matchups between the two clubs always brings out the best in each of them, there is added pressure with the drive for the 2013 WHL Playoffs in full force. Entering the game, both teams sit on the outside of the playoff picture in the Eastern Conference and will each be looking to make a late-season push to play a little further into spring.

The matchup marks the fifth of eight meetings in the season series with each side winning two contests so far. The Warriors have the most recent victory, claiming a shootout win in Regina last month, but the Pats took a 5-1 decision in the lone game in Moose Jaw so far. They’ll meet again three more times in March with a pair of those matchups in Moose Jaw.

A trio of Saskatchewan-born players are powering the Pats. Nearing the end of his WHL career, playoffs or no playoffs, Lane Scheidl is powering the Pats’ offence with 69 points (33G-36A) and is one of the team’s two 30-goal scorers. Joining him is 2013 NHL Draft prospect Morgan Klimchuk, who has 62 points (30G-32A). After being chosen by the Washington Capitals at the 2012 NHL Draft, Chandler Stephenson is also impressing in a shortened campaign with 35 points (12G-23A) through 36 games.

For the Warriors, their top three talents have been supplied by Alberta and British Columbia. Sam Fioretti is in the midst of a breakout campaign, having recorded 60 points (28G-32A) to date. He leads the Warriors and will be looking to light the lamp at home to power his team yet again. Toronto Maple Leafs prospect Morgan Rielly has been making those on the NHL club who believed in him for the fifth-overall selection look exceptionally smart. His 44 points (11G-33A) have placed him among the top-scoring defencemen in the entire WHL.

A rookie on the rise, Brayden Point played at the tail end of the 2011-12 season and on the Warriors’ run to the Eastern Conference Championship in 2012. This season, he’s brought offence early on in his WHL career with 42 points (14G-28A) to date.

In net, Matt Hewitt will tend to the crease for the Pats while Justin Paulic will protect the net for the Warriors. Catch all the action from Mosaic Place beginning at 7 p.m. MT!