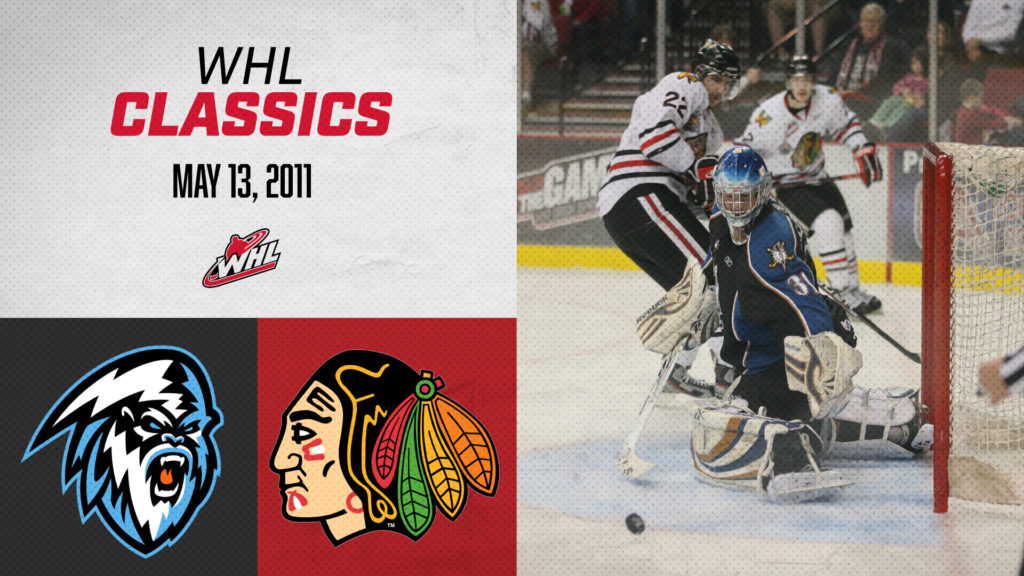 The 2011 WHL Championship Series began in Portland, Ore. on May 6, 2011 between the Portland Winterhawks and Kootenay ICE and has the chance to end there exactly one week later tonight on WHL Classics!

Game 4 featured the third overtime contest of the series, with the ICE claiming a second-straight extra-time victory. In two nervous-but-jubilant wins for the ICE at home, they lost a two-goal advantage in third and erased a one-goal deficit in the third. However, they eventually received clutch goals from Joe Antilla and Matt Fraser on back-to-back nights.

As was evidenced in a 7-5 Game 2 that went the way of the ICE, this series has put the league’s top offensive stars on display.

Cody Eakin has been the leader the ICE imagined after acquiring him from the Swift Current Broncos, tallying 27 points (11G-16A) to date in the WHL Playoffs. He helped put the ICE on the cusp of claiming the WHL Championship with a three-point (2G-1A) performance in Game 4, extending his point streak to nine games.

In the goal department, it doesn’t get any better than Max Reinhart or Fraser, who each have 15 to lead the league. Goal 15 for Fraser came in overtime of Game 4 on Wednesday. If Reinhart can break out for a performance similar to the five-goal game he had against the Medicine Hat Tigers to close out the Eastern Conference Championship, the ICE should be in great hands. Captain Brayden McNabb has also stepped up from the blue line with 25 points (3G-22A).

Countering for the home side, the offensive trio of Ryan Johansen, Nino Niederreiter, and Sven Bärtschi have powered the Winterhawks into their first WHL Championship Series since 2001. Looking back at their first and only win to date in the series, Bärtschi and Niederreiter provided the goals in regulation before Ty Rattie, the team’s fourth-leading scorer, scored in overtime.

Johansen leads all skaters in the 2011 WHL Playoffs with 28 points (13G-15A). After scoring a pair of goals in Game 4, the Winterhawks will be hopeful he can deliver the same magic in a winning performance on home ice. Joseph Morrow has provided 20 points (6G-14A) in 21 games to lead his blue line.

Between the pipes, the Nathan Lieuwen and Mac Carruth will once again face each other.

Kootenay ICE scoring leaders (As of May 12)

Portland Winterhawks scoring leaders (As of May 12)