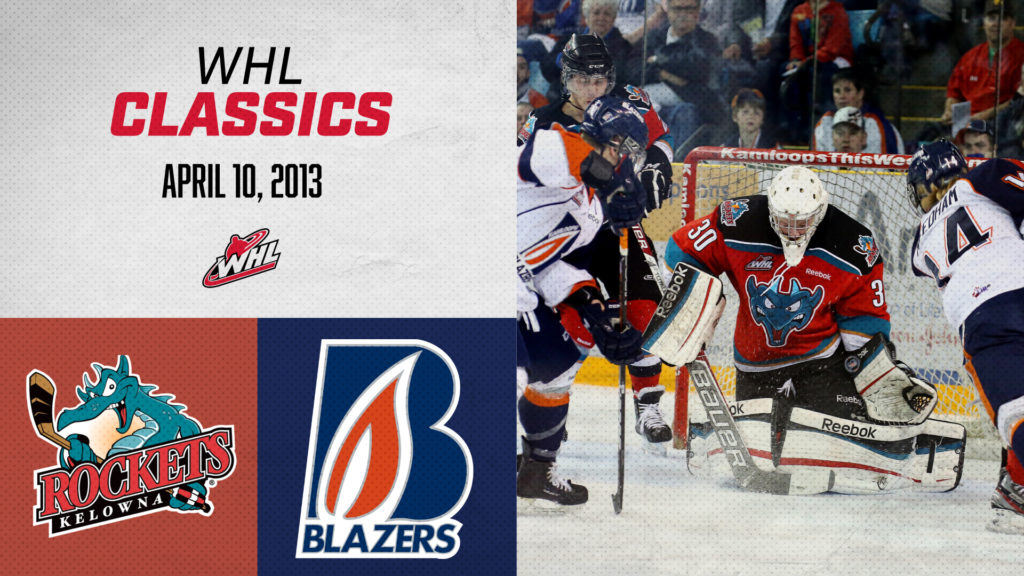 In a rivalry that needs no introduction, the Kelowna Rockets and Kamloops Blazers will take to the ice in Game 4 of their second-round series in the 2013 WHL Playoffs on WHL Classics Wednesday.

After winning Game 1 and 2 on the road, the Blazers earned a clutch Game 3 win thanks to JC Lipon’s overtime heroics. Now, the Blazers have four chances to secure one win against the Rockets and won’t want to waste any time.

After all, they know all too well what the Rockets did in the opening round of the 2013 WHL Playoffs. Down 3-0 to the Seattle Thunderbirds, the Rockets won four-straight games, including an overtime win in Game 7 at home. With their backs against the wall once again, the Rockets should come out with their best effort against their long-time rivals.

In Game 3 it was Blazer-turned-Rocket JT Barnett scoring twice for the visitors in just his second game of the 2013 WHL Playoffs. He may be a threat to find the back of the net for the Rockets, who will want to send the series home. Tyson Baillie, who scored a hat trick in that aforementioned Game 7 for the Rockets, missed Game 2 and 3 of the series, but will be back in the lineup for the April 10 tilt. Still the Rockets’ leading scorer in the 2013 WHL Playoffs, they’ll need him to find the scoresheet in order to stay alive.

Countering for the Blazers are a number of offensive standouts, with their top four scorers holding down a spot among the league-wide top scorers in the 2013 WHL Playoffs. That includes JC Lipon, whose 19 points (5G-14A) leads the entire field while Kale Kessy’s nine goals rank second.

After tallying seven goals, including two hat tricks, across six games against the Victoria Royals, Kessy has a pair of goals against the Rockets, scoring in Games 2 and 3. Will he extend that goal-scoring streak into Game 4?

Between the pipes, it’ll be Jordon Cooke and Cole Cheveldave tending to the crease at opposite ends of the rink.