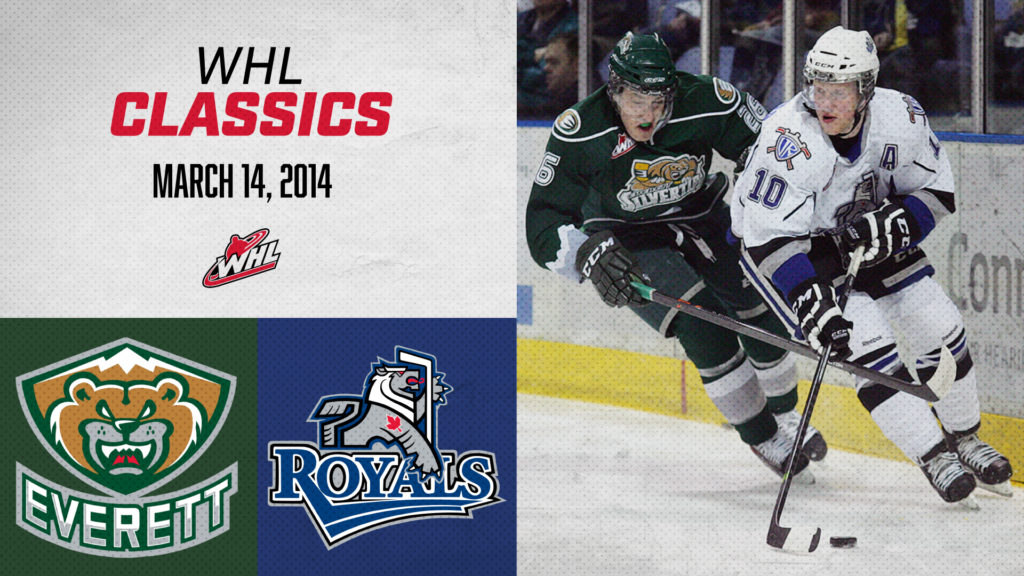 Part of the final weekend of the 2013-14 Western Hockey League Regular Season plays out with an inter-divisional clash on WHL Classics Wednesday!

The Everett Silvertips and Victoria Royals will meet on Vancouver Island for the opening of a home-and-home set that will conclude Saturday in Washington state. With the regular season winding down, there’s still plenty for the Silvertips and Royals to play for.

From the Royals’ perspective, they’ve already secured their first 100-point season in franchise history as well as second place in the B.C. Division and will be looking to add to that total. For the Silvertips, they’re in the heat of a three-way race with the Spokane Chiefs and Seattle Thunderbirds to claim fourth place in the Western Conference to earn home-ice advantage in the first round of the 2014 WHL Playoffs.

Leading the Royals, Brandon Magee continues to be the team’s top scorer, while Jordan Fransoo provides the team’s leadership qualities on the backend and as captain. Austin Carroll continues to show an advancement in his game while Ben Walker and Logan Nelson have also eclipsed the 50-point mark this season to provide steady offence for the Royals.

Though his season has been limited, alternate captain Joe Hicketts continues to impress in his second campaign with the Royals, providing the club with a future captaincy option should they offer it to the Kamloops, B.C. product. As a rookie, Tyler Soy has impressed early on the for his club after they chose him eighth overall at the 2012 WHL Bantam Draft.

Countering for the Silvertips, Joshua Winquist has emerged as one of the league’s top scorers in his overage season with the Silvertips and has been a scoring threat each time he’s hit the ice. Two forwards in their first season in the WHL have stepped up offensively as Ivan Nikolishin and Jujhar Khaira rank second and fourth in team scoring, respectively.

From the blue line Matt Pufahl is also enjoying a strong offensive performance as part of his overage in the WHL. Pufahl leads an up-and-coming defence that features the likes of San Jose Sharks prospect Mirco Mueller and rookie Noah Juulsen among others. How they handle the test of an offensively-gifted team like the Royals will be key in their future development.

In net, Patrik Polivka will take to the crease for the Royals. Polivka has already matched his career-best win total in a single season with 28 and will be determined to add to that total. Opposing him will be Austin Lotz, who has backstopped the Silvertips to 29 of their wins so far. Like Polivka, the St. Adolphe, Man. product will be looking to add to that total when the two teams clash.

Catch all the action beginning right here at 7 p.m. PT on WHL Classics!