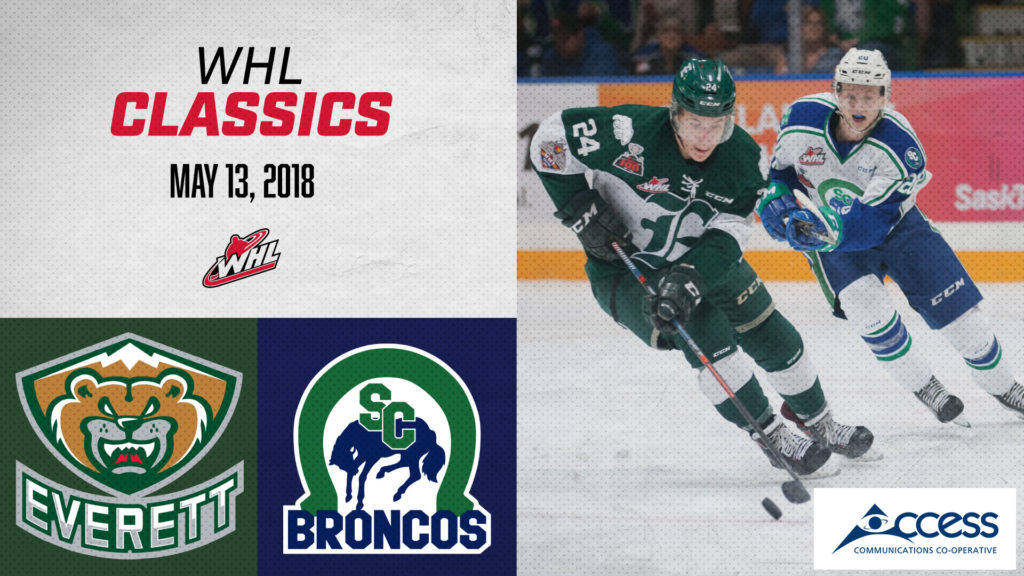 Wednesday on WHL Classics, we’re taking you back to Swift Current, Sask. for Game 6 of the 2018 Rogers WHL Championship Series between the Everett Silvertips and Swift Current Broncos.

The long and winding road of the 2017-18 WHL season has led to potentially the final game of the 2018 WHL Playoffs. Looking for their first WHL Championship victory since 1993, the Broncos are in a prime spot, ready to be cheered upon by their home crowd who hope to boost them to victory.

For the visiting Silvertips, they roared to a win in their final game on home ice of the season to force a return trip to Saskatchewan. Still searching for their first WHL Championship, the Silvertips need back-to-back road wins to realize their championship dreams and move along to Regina for the Memorial Cup.

Both teams bring a quality mix of defence and offence to the matchup.

On the Silvertips, the trio of Patrick Bajkov, Connor Dewar and Garrett Pilon have accounted for 37 of the team’s 81 goals to date. That overall figure currently leads the WHL. Looking to the likes of captain Matt Fonteyne and Riley Sutter, who each have nine goals, their contributions have been felt as well. Bajkov ended his final regular season in the WHL as the Silvertips’ all-time goals leader and should be a threat to challenge the Bronco defence throughout the game.

On the blue line for Everett, there’s no shortage of talent either as the likes of Kevin Davis, Wyatte Wylie, Jake Christiansen and Gianni Fairbrother provide developed-from-within options for the Silvertips. Ahead of the 2020 WHL Trade Deadline, a mammoth deal with the Kamloops Blazers saw the Silvertips acquire Pilon and defenceman Ondrej Vala. Vala has aided the team’s defence, providing another veteran option for the Club.

The Broncos have been building to this moment since the 2012 WHL Bantam Draft when they chose eventual captain Glenn Gawdin with the fifth-overall selection. Add in future draft choices like Tyler Steenbergen and Canadian Hockey League Import Draft choice Aleksi Heponiemi, and you have one of the most formidable trios in the entire CHL. After all their success up to this point, the challenge becomes closing out the series against a quality opponent.

Swift Current was active on the trade front to boost their forward core, making a few blockbuster deals. Adding Matteo Gennaro and Beck Malenstyn from the Calgary Hitmen helped solidify their offensive attack while the acquisition of forward Giorgio Estephan and goaltender Stuart Skinner helped to put them over the top in the Eastern Conference.

On the blue line, Colby Sissons, Artyom Minulin, and Sahvan Khaira paced the team through the first half of the season while the addition of Josh Anderson from the Prince George Cougars furthered their success in the defensive area as well.

A goaltending matchup for the ages will add another chapter as Skinner tends to the net for the Broncos while Carter Hart takes to the pipes for the Silvertips. While the Broncos have deserved their series lead, four intense one-goal games to begin the series doesn’t happen without the goaltenders being at the top of their game.

Everett Silvertips scoring leaders (As of May 12)

Swift Current Broncos scoring leaders (As of May 12)