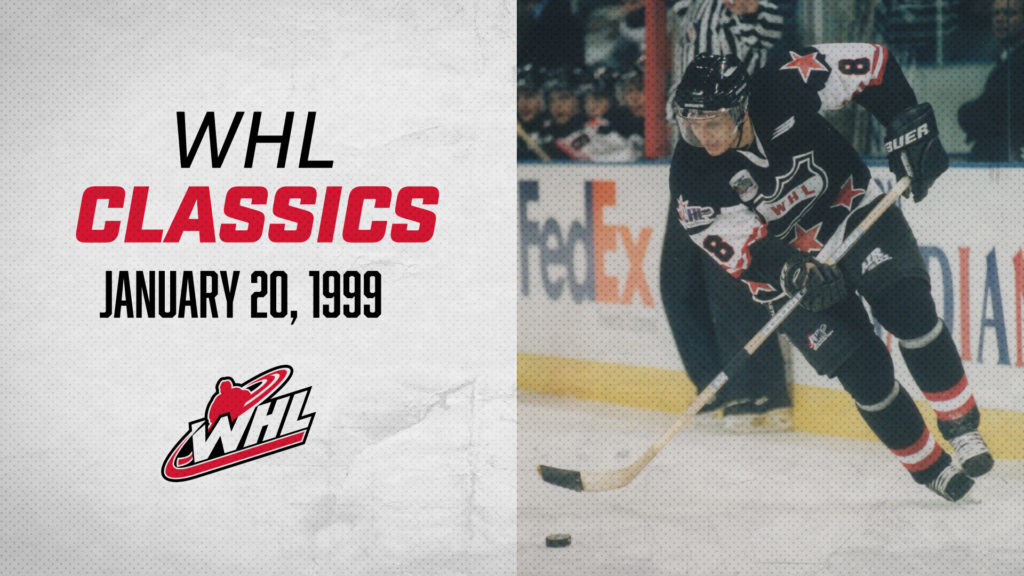 Live from Lethbridge, it’s the 1999 Western Hockey League All-Star Game on WHL Classics! As the Kamloops Blazers and Calgary Hitmen lead the regular season standings, tonight’s matchup will pit East vs. West in what is sure to be another memorable matchup.

Pride is on the line for both conferences. The Western Conference has won back-to-back All-Star games. They claimed a 7-5 win in Spokane, Wash. back in 1997 and took the 1998 game by a 7-6 margin in Regina, Sask. For the Eastern Conference, their last victory came in 1996 in Prince George, B.C. with a 10-7 decision and they’ll be eager to defend their home turf.

A home-game feel will be felt for three members of the Lethbridge Hurricanes as they get set to compete on home ice once more. Forward Curtis Huppe, defenceman Luc Theoret, and goaltender Brady Block will all represent for their club for the Eastern Conference.

There will be no shortage of talent on either side. Of the 12 combined WHL players selected in the first round of the 1997 and 1998 NHL Drafts, seven will appear in this year’s all-star festivities. From 1997, Brad Ference (Spokane Chiefs), Mike Brown (Kamloops Blazers), Scott Hannan (Kelowna Rockets) and Brenden Morrow (Portland Winterhawks) will all suit up for the Western Conference. Brad Stuart (Calgary Hitmen) will play for the East while Robyn Regehr (Kamloops Blazers) and Scott Gomez (Tri-City Americans) suit up for the Western Conference. With plenty of WHL players placing themselves on the radar for the 1999 NHL Draft, the likes of Pavel Brendl (Calgary Hitmen), Jamie Lundmark (Moose Jaw Warriors), and Steve McCarthy (Kootenay ICE) will hope to use the game as a springboard for an increased draft profile.

Before the puck drops on the game, the all-stars took to the ice Tuesday for the annual skills competition, with the Western Conference earning a 13-12 victory.

A trio of skaters slid under the 14-second mark in the fastest skater competition, led by Dylan Gyori from the Tri-City Americans who posted a 13.858 second lap. Next fastest was Brad Leeb from the Red Deer Rebels, who clocked in at 13.866 seconds and Jason Chimera from the Medicine Hat Tigers, who posted a time of 13.875 seconds.

Jeff Blair (Saskatoon Blades) and Ryan Robson (Brandon Wheat Kings) did not participate due to injury.

Jason LaBarbera (Portland Winterhawks) did not participate due to injury.