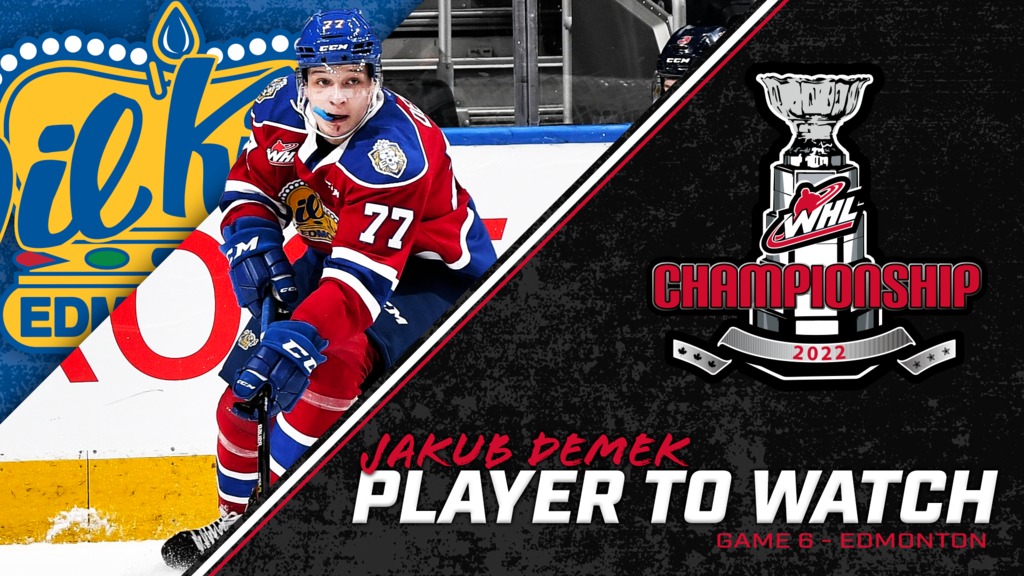 For the first time since 2019, the WHL Championship Series is back. Featuring the WHL Eastern Conference Champion Edmonton Oil Kings and the WHL Western Conference Champion Seattle Thunderbirds, Game 6 is set for Monday, June 13 (7:30 p.m. MT) at Rogers Place in Edmonton. The Oil Kings lead the best-of-seven series by a 3-2 margin after the Seattle Thunderbirds claimed a 3-2 win to stave off elimination in Game 5.

Visit oilkings.ca for tickets, or catch the action from home on TSN 1 & 4 or via WHL Live.

Jakub Demek has been an imposing presence through five games of the 2022 WHL Championship Series.

The Slovakian import has been one of the Edmonton Oil Kings best players in recent days, riding a point streak of three games that has since him produce four points (1G-3A) since Game 3.

In his first season in North America, Demek has been a welcome addition for the Oil Kings. Selected in the first round (47th overall) of the 2021 CHL Import Draft, the product of Kosice enjoyed an outstanding regular season, tallying 54 points (20G-34A) in 55 games.

“It’s been unbelievable for me,” Demek said prior to Game 6. “It’s the first time for me to be away from home. I like the city, I like the fans, I like this rink – everything here. The first two months were hard for me because I didn’t know the language and everything was new for me. But as time goes, it gets better and better.”

Demek’s reliability as a provider of secondary offense on a deep Oil Kings squad has been vital through the 2022 WHL Playoffs. When the big line isn’t going, it seems as though Demek provides a spark, evidenced by his 16 points (4G-12A) in 18 games.

With a second opportunity to close out the Seattle Thunderbirds looming large, Demek will once again be looked to as a catalyst up front.