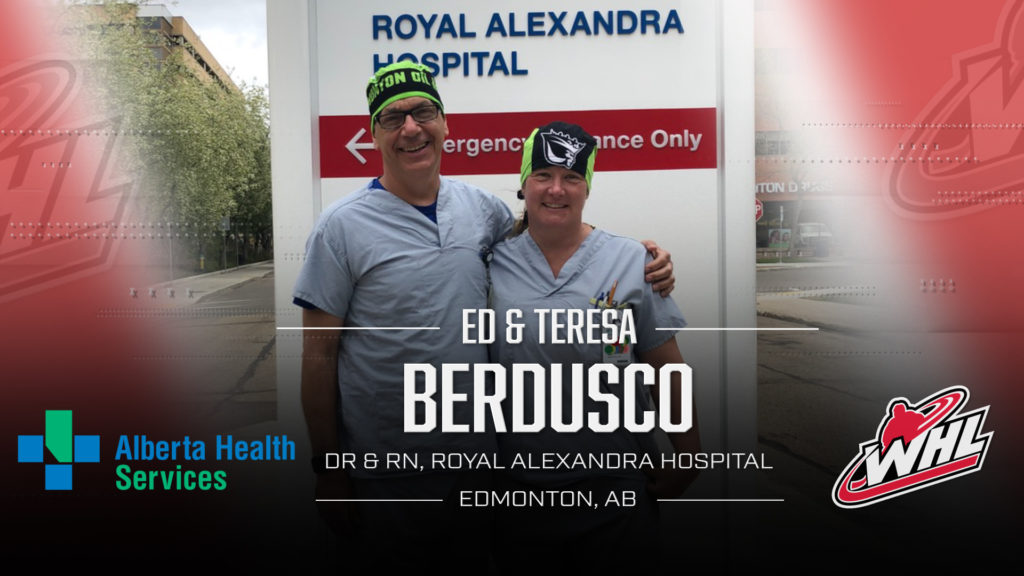 Most parents can’t wait for their children to grow up and move out of the house so they can enjoy the rewards of parenting and they only have to deal with the occasional call from their children at university asking for a little spending money. Teresa and Ed Berdusco arrived at that point in 2015, their twin daughters were a few years away from going to university, so instead of preparing for a life of leisure, they decided to become billets for the Edmonton Oil Kings.

The Berduscos are unique in the fact that husband and wife both work at the Royal Alexandra Hospital in Edmonton where Teresa is a Registered Nurse and Ed is an Emergency Physician as well as the Team Doctor for the Oil Kings.

“It’s a really big department and you are so busy at work,” Ed said. “We don’t really see each other but when we do we have fun.”

The pair have been on the front lines of the COVID-19 pandemic since the beginning and have been dealing with an ongoing series of adjustments as new safety guidelines and protocols come in each day.

“It’s challenging, more so time wise,” Teresa said. “Edmonton did a very good job in minimizing the impact of COVID-19 but everything just takes longer. You have to gear up and gear down and wash 10 times more so than you would normally but it’s still nursing and I still get to take care of patients.”

Shout out to our team doctor, Edward Berdusco, who is repping your #OilKings while continuing to keep the community healthy! #representEOK pic.twitter.com/I4LfUVG2a1

In early December of 2019, time was something that the Berduscos did not have a lot of at an Edmonton Oil Kings game against the Moose Jaw Warriors. Warriors defenceman Daemon Hunt was severely cut on his forearm and needed immediate medical attention. Luckily, the Warriors athletic trainer Brooke Kosolofski and Oil Kings medical staff were right there to ensure he got the help he needed.

“I couldn’t see the injury, because where it happened was just beyond the bench and I knew something had occurred,” Ed said. “I looked at my athletic therapist to see what he was doing because if he jumps on the ice or goes to the tunnel, I know something is going on. When I took a look at the injury I knew immediately he would need surgery so I called a plastic surgeon and got him in to see him right away.”

Hunt needed to go directly to the hospital to be patched up and monitored overnight, luckily Teresa was also at the game and after a quick call from her husband she was in the back seat with Hunt as they took him from Rogers Place to nearby Royal Alexandra Hospital.

“Well, we had to keep pressure on his arm because there was a lot of blood,” Teresa said. “The biggest thing is I can get him into the hospital, into triage and get a chart made without taking up any of the hospitals resources.”

Hunt missed nearly three months recovering from the injury but was able to return to the Warriors before the season was ultimately cancelled.

Ed’s medical work in hockey extends beyond the Oil Kings as he has been working with Hockey Canada for several years and this past season was in the Czech Republic with the World Junior team serving as the team’s physician overseas.

“Hockey Canada does a fantastic job of getting you to know your players,” Ed said. “I started with these guys at the U17s and then you stay with that cohort for the Ivan Hlinka and for the World U18s. Some of these players I had been at camps with six or seven times.”

At the 2020 World Junior Championship two of Canada’s biggest stars – Alexis Lafreniere and Barrett Hayton – both sustained injuries during tournament play and there was significant discussion that one or potentially both players could be shut down for the remainder of the tournament.

“It’s a big stage at the World Juniors but you are never alone, it’s always a team decision,” Ed said. “Whether it’s Lafreniere or Hayton, you involve the players, parents, agent, the NHL team and the athletic therapists you are with. It was never just on my shoulders, it was a shared decision.”

In the end, both Lafreniere and Hayton played for Canada and were key contributors in their nation’s 4-3 gold-medal win over Russia.

Congratulations to @HockeyCanada and Dr. Ed Berdusco on capturing 🥇 at this year’s #WorldJuniors! 🇨🇦#berdusGOLD pic.twitter.com/x6nyAeLKqF

The Berduscos have sacrificed a lot for hockey; their home, their time, their expertise but as Teresa says it has been worth it.

“It’s a been a big sacrifice over these past five years, we have sacrificed work and holidays,” Teresa said. “But to see him on the ice holding that cup up in the Czech Republic and him looking for us in the crowd, it was the best. To see his smile it was all worth it.”

The WHL commends Ed and Teresa Berdusco for their commitment as a WHL billet family for the Oil Kings, and for working on the frontlines at the Royal Alexandra Hospital in Edmonton.