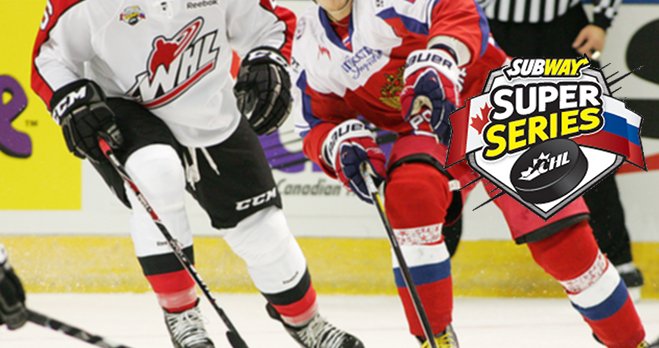 Calgary, AB — The Western Hockey League, in collaboration with the Canadian Hockey League, the Red Deer Rebels Hockey Club and the Lethbridge Hurricanes Hockey Club, today announced the majority of the roster of Team WHL which will compete against Team Russia in the 2013 SUBWAY® Super Series.

Team WHL will face Team Russia in Game 5 of the 2013 SUBWAY® Super Series in Red Deer, AB, on Wednesday, November 27th, and will conclude the series on Thursday, November 28th, with Game 6 in Lethbridge, AB.  The QMJHL will host the first two games of the series, and the OHL will host Games 3 and 4.

Team WHL’s roster is highlighted by Sam Reinhart of the Kootenay Ice, one of the top-ranked skaters for the 2014 NHL Draft.  The roster also features seven players who were first-round NHL Draft picks, including defencemen Josh Morrissey of the Prince Albert Raiders and Ryan Pulock of the Brandon Wheat Kings, and forwards Curtis Lazar of the Edmonton Oil Kings, Hunter Shinkaruk of the Medicine Hat Tigers and Morgan Klimchuk of the Regina Pats, who were all selected in the 2013 NHL Draft.  Additionally, Team WHL’s roster includes Edmonton Oil Kings’ defenceman Griffin Reinhart, who was a member of Canada’s National Junior team at the 2013 IIHF World Junior Championship.

Each of the three CHL member Leagues assembled a selection Committee, working closely with Hockey Canada, to select the players for this year’s series.

The 2013 SUBWAY® Super Series is supported by CHL associate sponsors, Bank of Montreal and Old Dutch.

The schedule for the 2013 SUBWAY® Super Series is as follows:

About SUBWAY® restaurants
SUBWAY®Restaurants is the world’s largest submarine sandwich franchise, with 40,000 restaurants in over 100 countries and more than 3,000 restaurants in Canada.  In 2011, the SUBWAY®chain surpassed McDonald’s in the number of restaurant locations worldwide. Headquartered in Milford, Conn., the SUBWAY®restaurant chain was cofounded by Fred DeLuca and Dr. Peter Buck in 1965. As the Official Training Restaurant for the CHL, SUBWAY®Restaurants is executing the Official Training Day Contest, encouraging hockey coaches, respective parents and friends across Canada to participate for a chance to have their local amateur league team train with their local CHL team. For more information about the SUBWAY® chain or to learn more about the Training Day contest, visit www.SUBWAY.ca.

For more information including how to purchase tickets please visit www.subwaysuperseries.ca.