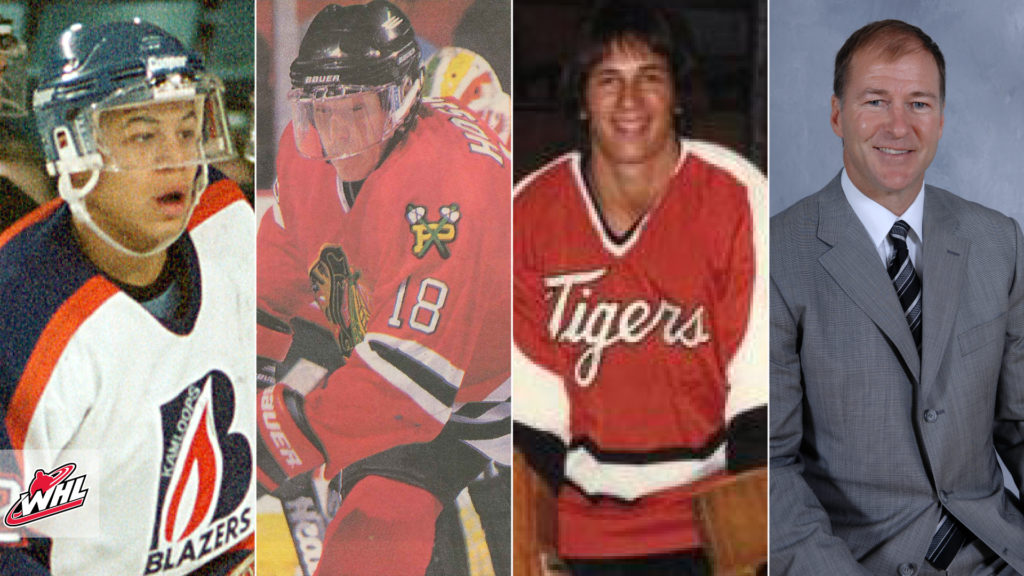 Three Western Hockey League alumni and one member of the Edmonton Oil Kings’ business operations staff have been elected to the Hockey Hall of Fame’s class of 2020. Former Kamloops Blazers’ star and now co-owner Jarome Iginla, along with Portland Winterhawks’ forward Marian Hossa, Medicine Hat Tigers’ goaltender Ken Holland and Oil Kings’ Vice-Chair and Governor Kevin Lowe were among the six inductees announced on June 24 by the Hockey Hall of Fame.

Iginla began his illustrious career in Kamloops from 1993-1996 where he won two Memorial Cups with the Blazers in 1994 and 1995. As the Blazers enjoyed a second straight Memorial Cup title, the St. Albert, Alta. product was named the Most Sportsmanlike Player of the Tournament. Iginla’s breakout campaign with the Blazers which included 100 points (39G-61A) in his first two seasons, which solidified his top-prospect status heading into the 1995 NHL Draft where he was selected 11th overall by the Dallas Stars.

However, before he was able to join the Stars, Iginla was dealt to the Calgary Flames, setting the stage for his storied NHL career in Calgary. In his 1995-96 season, Iginla cemented himself as one of WHL’s greatest players of all-time. In 63 regular-season games, Iginla tallied 136 points (63G-73A), being named WHL Player of the Year and a member of both the WHL and CHL First All-Star teams.

Upon the competition of this season, Iginla jumped to the NHL ranks and went on to play 1,554 regular-season NHL games over 20 professional seasons and five teams –  the Flames, Pittsburgh Penguins, Boston Bruins, Colorado Avalanche and Los Angeles Kings. Over his career, Iginla won multiple individual awards including the Art Ross Trophy as the top scorer in 2002, Maurice Richard Trophy as the top goal scorer in 2002 and 2004, the Lester B. Pearson Award as top player as voted on by the players in 2002, the King Clancy Award in 2004 and the Mark Messier Leadership Award in 2009. Two gold medals from the 2002 and 2010 Olympics also belong to Iginla’s hardware collection from his time with Team Canada.

The Stara Lubovna, SVK native played the first seven games of the 1997-98 season in Ottawa before being re-assigned to Portland where he went on to win the Jim Piggot Memorial Trophy as the WHL Rookie of the Year after earning 85 points (45G-40A) in 53 regular-season games. That year, the Winterhawks secured a berth in the Memorial Cup and defeated the Guelph Storm in overtime to win the championship. Hossa was named to the Memorial Cup All-Star team and was also selected to both the WHL West First Team All-Star Team and the CHL All-Star Team.

Despite a delayed start to the 1998-99 season due to a knee injury, Hossa finished second for the Calder Memorial Trophy vote as the NHL’s Rookie of the Year. Over his 19-year NHL career, Hossa was selected to six NHL All-star Teams and became the first player to appear in three consecutive Stanley Cup Finals with three different teams. Before officially retiring in May of 2018, Hossa had amassed three Stanley Cups with the Chicago Blackhawks.

From then on, Holland played for various Ameican Hockey League (AHL) teams before joining the Detriot Red Wings as a player in 1982-83. In 1994 Holland was promoted to the role of assistant general manager for the Red Wings and general manager of the Adirondack Red Wings, Detroit’s AHL affiliate. He was named the club’s 10th general manager on July 18, 1997 – one month after the Wings won the Stanley Cup.

Holland would go on to earn four Stanley Cup rings in Detroit. One as an assistant general manager in 1996-97 and three as the general manager (’97-98, ’01-02, ’07-08). Under Holland, the Wings made the playoffs for 25 consecutive seasons. After 34 years with the Red Wings, Holland left Detroit for Edmonton in May 2019, becoming the Oilers’ general manager. As an expert in team development, Holland’s approach to management has proven successful through his long career with the Red Wings and his more recent work with the Oilers. As a result, he will be inducted into the Hockey Hall of Fame in the Builder category later in 2020.

Tiger Alumni Ken Holland was inducted into the Hockey Hall of Fame as part of the class of 2020!

As a well-established Quebec Major Junior Hockey League (QMJHL) player with the Quebec Remparts Lowe was selected 21st overall by the Oilers at the 1979 NHL Entry Draft and became the organizations’ first NHL Draft pick. The Oilers found momentum in the 1981-82 season with Lowe providing a substantial contribution to the team alongside fellow Hall of Fame teammates Wayne Gretzky, Mark Messier, Glenn Anderson and Paul Coffey. The team enjoyed a dynasty decade with many NHL records broken along the way.

The Lachute, Que., product played 13 seasons with the Oilers, helping lead the franchise to five Stanley Cup championships, two Presidents’ Trophy first overall finishes, eight division championships and six conference championships. Following his outstanding playing career, Lowe stayed heavily invested in hockey. In 1998-99, he took on a role as an assistant coach for Edmonton and then became the head coach in 1999-2000. Following that season, his role was elevated to general manager. In 2008-09, he was promoted to President of Hockey Operations with the Edmonton Oilers. In April 2015, Kevin was named Vice-Chairman of Oilers Entertainment Group and also serves as the Edmonton Oil Kings’ Vice-Chair and Governor.