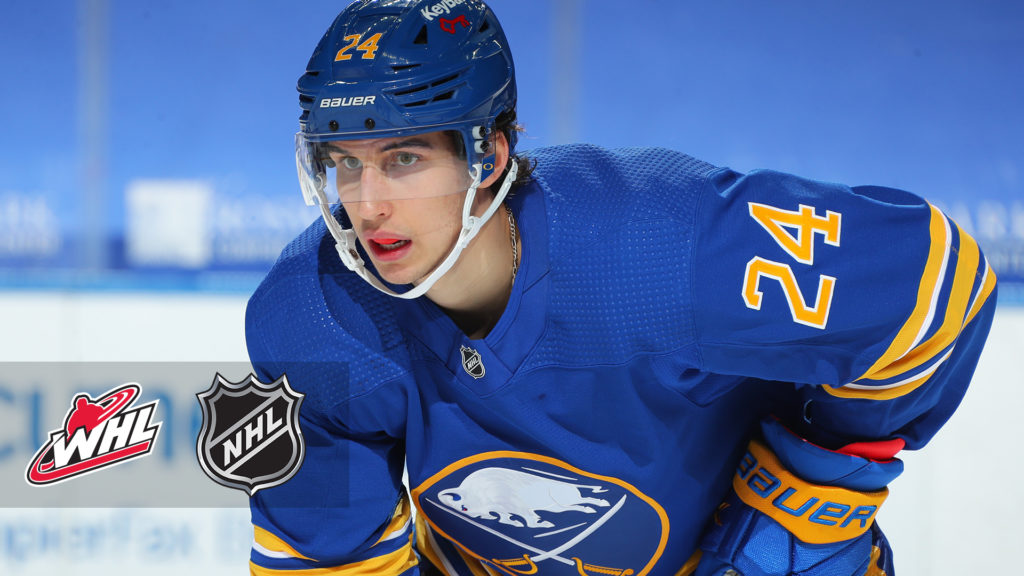 The Calder Memorial Trophy is awarded to the NHL’s top rookie and to be eligible a player must have not played more than 25 games in any single preceding season; nor in six or more games in each of any two preceding seasons in any major professional league. Only three WHL Alumni have won the award in the past two decades: Mathew Barzal (Seattle Thunderbirds), Tyler Myers (Kelowna Rockets), and Scott Gomez (Tri-City Americans).

This season, six WHL Alumni stand out as potential finalists for the Calder Trophy.

The WHL’s 2017-18 Rookie of the Year will begin his first season with the highly offensive Buffalo Sabres. The 19-year-old centre was high pick for the Sabres in 2019 going seventh overall. Cozens had 85 points in 51 games in his final season with the Lethbridge Hurricanes last year. Cozens is rated as one of the top playmaking prospects to come out of the 2019 NHL Draft and is expected to hold down a top-nine role for the Sabres. Expect to see him on the special-teams units, as he tallied a league high four shorthanded goals last season while averaging eight power-play goals throughout his junior career.

Finishing off his final year in junior this past season with the Spokane Chiefs, the two-time WHL Defenceman of the Year had a dominating WHL career. In just four seasons in the league, he averaged just under a point per game, scoring 45 goals and 190 assists for 235 points in 240 regular season games. Expect Smith to have a direct impact in the NHL, being placed on young New Jersey team that is in dire need of a puck-moving defenceman. Strong vision and puck-moving ability will give Smith the opportunity to command the power play while still being relied on defensively through his strong transition game.

Bowen Byram will be entering a strong Colorado defence after racking up 52 points in just 50 games for the Vancouver Giants last season, along with 71 points the year before. Byram adds diversity in the defensemen powerplay position as he brings a strong left-handed shot and bridges that one two punch with the right-handed 2020 Calder Trophy winner, Cale Makar. Byram is known for his strong vision and great transition game. Likely to play as a third-pairing defenceman in his rookie campaign, Byram will have ample opportunity being mentored under the skill and quickness of a deep Colorado Avalanche blueline.

The 22-year-old left-handed defenceman enters his third season with the Calgary Flames, but is up for Calder consideration after missing last season and only playing 24 games prior (giving him rookie status). Valimaki is known for being a strong, dynamic puck-moving defenceman, and will be looked upon to quarterback the power play as he did in Tri-City. Valimaki put up 19 points in 19 games playing on loan for Ilves in Finland’s Liiga and is expected to compete for a top-four role with the Calgary Flames. The former WHL all-star scored 138 points in 159 games with Tri-City and represented Finland in two World Junior Championships.

Morgan Geekie has had his sniffs of the NHL and is poised to make an impact after a strong campaign in the American Hockey League. Prior to this season, Geekie put up three goals and one assist in just two NHL games. The centre is known as a playoff specialist, putting up 17 goals and 10 assists in just 14 games during Tri-City’s conference finals run in 2017-18. This transitioned into the professional ranks as he scored most playoff points by a rookie with 18 and helped the Charlotte Checkers win a Calder Cup in 2019. Making a big splash in the NHL in a short period of time, expect Geekie to have a strong rookie campaign given the right opportunities.

Right-handed defencemen can be considered a rare commodity in the NHL, which gives Kelowna Rockets alumnus Cal Foote the opportunity to make an impact with the defending Stanley Cup champions. Foote has seen strong growth in his game playing the past two seasons in the AHL, averaging 30 points. Foote is considered as a strong two-way defenceman who is very reliable in his own end and can contribute when needed offensively. Expect the former WHL all-star and World Junior gold medalist to become an NHL regular with the Lightning on the third pairing with the departures of Kevin Shattenkirk and Zack Bogosian paving the way for opportunity.