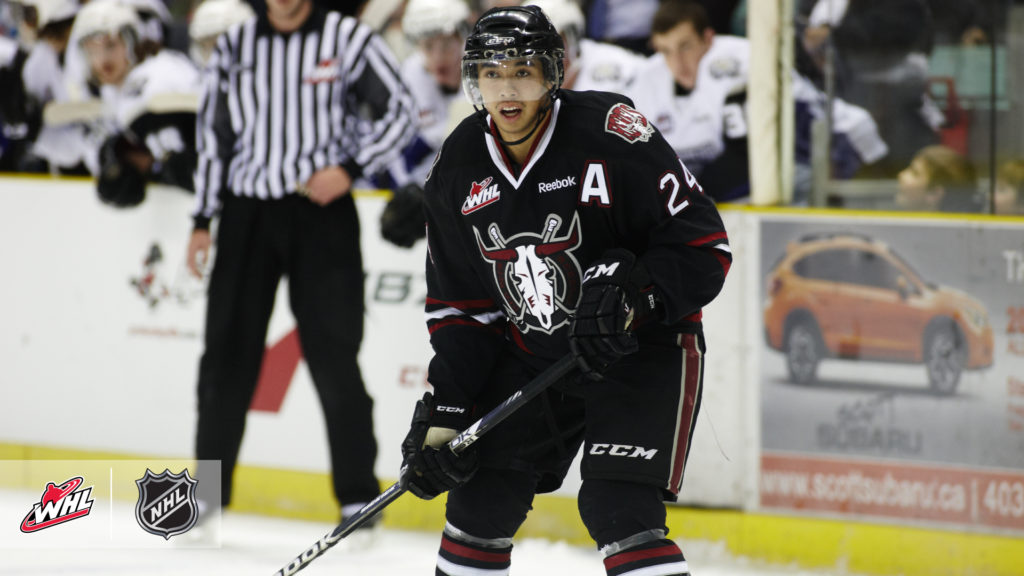 Former Red Deer Rebels and Portland Winterhawks defenceman Matt Dumba has been named a finalist for the NHL’s King Clancy Memorial Trophy, which is presented annually “to the player who best exemplifies leadership qualities on and off the ice and has made a noteworthy humanitarian contribution in his community.”

The NHL announced Dumba – currently a defenceman with the Minnesota Wild – as one of three finalists on Friday, alongside New York Rangers goaltender Henrik Lundqvist and New Jersey Devils defenceman P.K. Subban.

Dumba, 26, provided a vocal and visible response to social unrest across North America, co-founding the Hockey Diversity Alliance, aimed at eradicating systemic racism and intolerance in hockey. As the 2020 Stanley Cup Qualifiers opened in Edmonton, Alta., Dumba took to centre ice and delivered a powerful message.

Dumba also stepped up in response to the COVID-19 pandemic, supporting more than 60 families who are a part of ACES (Athletes Committed to Educating Students). He worked closely with Hockey Fights Cancer and made a notable donation to Australia wildfire relief efforts.

A native of Calgary, Alta., Dumba enjoyed a stellar five seasons in the WHL, including four campaigns with the Red Deer Rebels after being selected fourth overall in the 2009 WHL Bantam Draft. Over the course of 225 career WHL regular season contests, the mobile defenceman registered 151 points (59G-92A), adding another 24 points (12G-12A) in 41 career WHL post-season outings.

“I think that’s why I’m so keen to stand up for a fight like this right now, because of her legacy.”

While Matt Dumba is using his platform to speak out about anti-racism in hockey now, it was his Grandmother Edna who truly taught his family the importance of inclusion. pic.twitter.com/4YJp7sBwvS

For the 2010-11 WHL season, Dumba was awarded the Jim Piggott Memorial Trophy as WHL Rookie of the Year after recording 26 points (15G-11A) in 62 games while logging a plus-minus of plus-24. From there, he was named to the CHL Top Prospects Game in 2012, a precursor to the Wild selecting him in the first round (seventh overall) of the 2012 NHL Draft.

Since being selected by the Wild, Dumba has enjoyed seven quality seasons in the NHL, recording 174 points (62G-112A) in 411 career regular season appearances.

According to the NHL, the King Clancy Memorial Trophy was presented in 1988 by the NHL’s Board of Gvoernors in honour of Frank “King” Clancy, a beloved figure in the League for decades as a player, referee, coach, manager and goodwill ambassador. A three-time Stanley Cup champion and 1958 inductee to the Hockey Hall of Fame, Clancy was voted as one of the 100 Greatest NHL Players during the League’s Centennial Celebration in 2017.

The winner of the King Clancy Memorial Trophy for 2019-20 will be announced during the Conference Finals of the Stanley Cup Playoffs.

Today, the @NHL announced that #mnwild defenseman @matt_dumba has been named a finalist for the 2020 King Clancy Memorial Trophy.

Thank you for all that you do in our community, Matt! pic.twitter.com/3yqoTH8UCJ