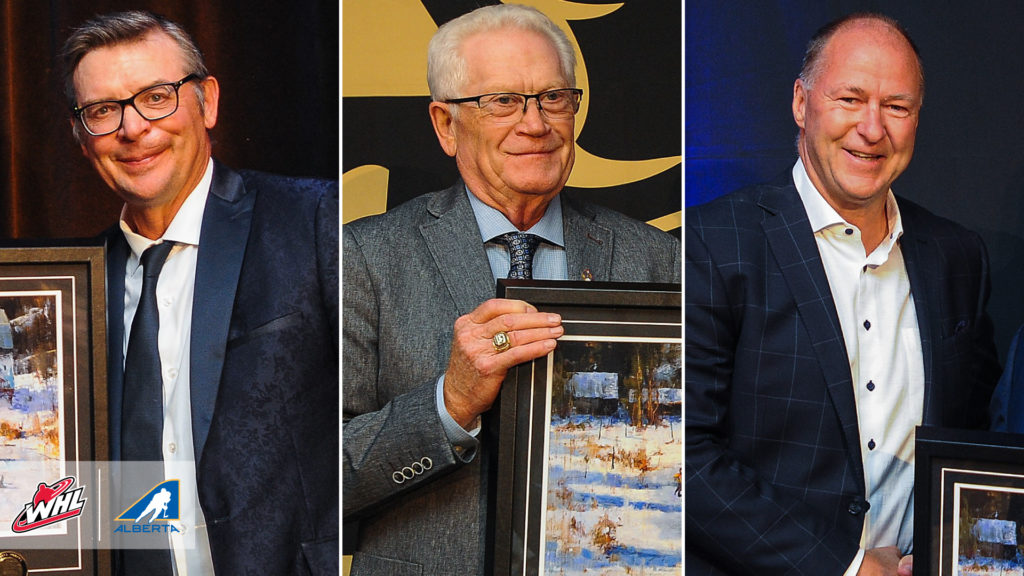 During his induction speech, Fleury reminisced on the highlights of his career including his WHL experience with the Warriors, his Stanley Cup Championship with the Calgary Flames in 1989 and his career with the Colorado Avalanche, New York Rangers and Chicago Blackhawks. Finally, Fleury remarked on his philanthropic efforts surrounding trauma, mental health and addiction issues.

“It’s nice to be recognized, but it’s more important what you leave behind,” Fleury said. “I try and help people understand what trauma does to an individual. I try to give them hope and inspiration.”

WATCH: 2019 Alberta Hockey Hall of Fame inductee @TheoFleury14 reflects on his time with the @NHLFlames, and how it helped lead him to his induction Sunday night in Canmore.#AHHF | #AlbertaBuilt | #NHL pic.twitter.com/xgwzdFFbIY

After 50 years of experience with the Medicine Hat Tigers as their play-by-play voice and bus driver, Bob Ridley is an integral part of the Tigers’ legacy. In over 3,900 games, Ridley only ever missed one broadcast, showing his true love and dedication to the Club.

In his AHHF induction acceptance speech, Ridley talked about the many turns his career path took after realizing he wasn’t likely to become a hockey player due to his size and ability. As he continued down the broadcasting and announcing path he became entrenched in Medicine Hat’s history including calling the games for the first Tigers team to reach the Memorial Cup in 1973 and the opportunity to call games at the Montreal Forum in the same broadcast booth as Danny Gallivan.

I want to thank hockey Alberta for inducting me to the prestigious Alberta Hockey Hall of Fame. Humbled to be going in with Kevin Lowe, Duncan Mcdougal, and Shirley Cameron, plus the 87-88 tiger Memorial cup winners and the gala legendary Theo Fleury. pic.twitter.com/LvMUYRYFTc

As the only Albertan team to win back-to-back Memorial Cups, both of the 1986-87 and 1987-88 Medicine Hat Tigers teams were honoured with an induction into the AHHF.

Scott McCrady, a defenceman for the two teams during the time, spoke on behalf of the group for the induction. He also highlighted Ridley’s importance to the teams’ success during those years and that their Championship titles would be amiss without their legendary broadcaster and bus driver.

“Thanks for always getting us home Bob,” McCrady praised during his speech.

McCrady also reflected on the importance of decisions and lauded the team’s General Manager, Russ Farwell, for guiding the teams’ efforts and hiring the right coaches, Bryan Maxwell and Barry Melrose. He also recalled how the importance of winning every little battle – including winning the ceremonial faceoff – propelled the teams’ success.

“Team first, individual second and no one is bigger than the sum of the parts,” McCrady said.

Only 8 teams in the Canadian Hockey League have won back-to-back Memorial Cups. Only one team from Alberta has accomplished that feat. Congratulations to the 1986-87 & 1987-88 Medicine Hat Tigers!#AHHF | #AlbertaBuilt | #WHL pic.twitter.com/LriujydA32

Lowe, an integral member of the Edmonton hockey community and the Edmonton Oil Kings’ Vice Chair and Governor, was also honoured at the event. The defenceman’s leadership qualities both on and off the ice have seen him through tremendous career success, winning Stanley Cup Championships in both Edmonton and New York. During his induction speech, Lowe emphasized the importance of hard work and family.

“If you work hard, pay your dues, eventually good things will happen and none of these things happen without the strong support of my family,” Lowe said.

His six Stanley Cup rings say it all. Congratulations to one of the greatest 200-foot defencemen of all time, @EdmontonOilers legend Kevin Lowe!#AHHF | #AlbertaBuilt | #NHL pic.twitter.com/TjWGbIkgpB

Also inducted into the Class of 2019 were Duncan MacDougall and Shirley Cameron.

ICYMI: The Class of 2019 took their rightful place in the Alberta Hockey Hall of Fame last night in Canmore.